Hattie acts on her feelings for Roman – with a kiss

Thursday August 17, 2017: Chloe supports Lucas, Brady gets back from a night in rehab, Eric learns that his brother thinks he's having sex with Nicole, and Hattie goes to Roman, hoping to date him. 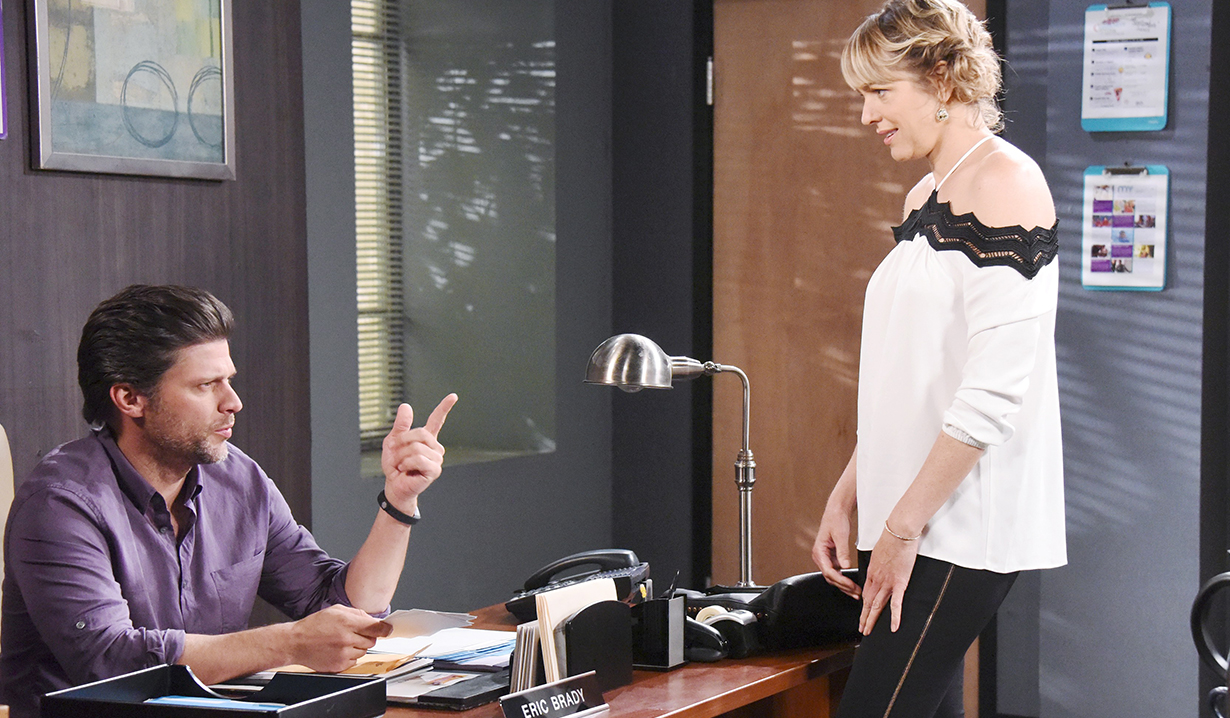 At Chloe’s hotel room, Lucas has a nightmare that Adrienne dumps him. He wakes up to Chloe and realizes it’s his realityl! He can’t recall what happened the night before.

She gives him Aspirin for a hangover and it all comes back to him. Chloe asks if he was really drinking with Brady. He admits it and then backtracks.

Adrienne reads the news in jail, learning that Abe’s been arrested. An inmate steals the paper from her and calls her Bonnie. She snaps that she’s Adrienne Kiriakis. “Why won’t anyone believe me?” A guard walks by and she tries to get him to listen. She tells him how Anjelica drugged her and listens, bored. She begs him to let her call her son and fiance. He can once she gets her phone privileges back. She has a fit and hits him so he throws her in lockdown as she screams.

At Salem Inn, Bonnie orders room service and reads the news. “Looks like Honest Abe ain’t so honest,” she says. Hattie arrives, rested and pumped up after a workout. She offers an arm for Bonnie to test her muscles and then gushes about seeing Roman today. She leaves when Anjelica appears. Bonnie relays how she broke things off with Lucas. “It was hard since he’s hella fine.” Anjelica tells her pal to get a hold of herself. “I’d rather get a hold of him if you know what I’m saying,” Bonnie states. Anjelica shakes her head. They can’t have sex or Lucas will know she’s not Adrienne. “Oh yeah, the boob thing,” Bonnie says. Anjelica asks Bonnie to be mindful of what she says to Justin.

More: Deconstructing DOOL: Doppelgangers seen as ludicrous and out of touch

At the Kiriakis mansion, Victor reads about Abe in the news. Brady returns from his overnight stay in rehab, glad to have gone and vows he’ll never drink again. They agree to keep it secret. Brady pulls out the cursed amulet and thinks it’s crazy that Eric murdered Deimos. Victor says it’s only an assumption. Brady thinks Eric had incentive. Vic is supportive of his grandson’s sobriety and still blames Chloe for his addiction. Brady disagrees and decides to take in an AA meeting.

Nicole finds Eric at the Horton Center, looking over the photos he took of her for Holly. He hands them over. She says Victor told her Brady went to Chicago on a last minute business trip last night but she thinks Brady’s purposefully avoiding her because he thinks they’re having an affair. Eric gawps. She assures him she will convince Brady otherwise. Eric explains that somebody trashed his room last night. Maybe it was Brady.

Hattie strolls into the pub and Roman asks, “Marlena have you lost your mind?” He heard she dumped John. Hattie tries to explain she’s got wants and needs. Roman demands she work things out. Hattie is done with John and thinks they were doomed from the beginning. She spins the tale of how they met. Roman’s puzzled. “That’s not how it happened.” She brings up having kids with Roman and messes up their birth order, thinking Eric came last. Roman reminds her it was only by 2 minutes. Hattie quickly backpedals. She goes on about how she only fell in love with John because she thought he was Roman. He laughs and she pounces, kissing him while he struggles to breathe.

Chloe and Lucas have coffee at Mandalay. Lucas says he’s had a hard couple of years. Losing Will was the worst thing that ever happened to him. Allie’s with Sami. “It’s hard.” Adrienne was everything to Lucas. All he feels now is sadness and grief. Chloe tries to comfort him, reminding him he has friends and family who would do anything for him. He knows. He has to stop feeling sorry for himself – and stop drinking. Chloe says even though their past is messed up, she’s always there for him. She leaves. Bonnie walks by, holding her purse up to her head in order to disguise herself from Lucas but he shouts her name. She sits with him and learns he got drunk last night. She blurts, “But you’re an alcoholic. That’s bad.” He knows. He talks about the last time they made love and she swoons, dizzily, then fantasizes that he’s ‘sex on a stick’. She tells Lucas she doesn’t love him. Once she’s gone, Lucas orders a Bloody Mary.

Chloe arrives at the Kiriakis mansion and since Victor refuses to give her time alone with Brady, she tells Brady that Lucas said Brady fell off the wagon last night. Victor denies it vehemently and then Brady follows suit. Chloe hopes he’s okay. She goes. Nicole arrives.

Chloe drops by the Horton Center. Eric mutters that he cant’ get ‘her’ out of his head. Chloe asks who he means.

Brady and Nicole have it out.

Roman's romantic dry spell is over...