Wednesday August 9, 2017: Gabi and Abigail get a chance to discuss the reunion, Marlena calls for an orderly to release her in the psych ward, and Chad tells Sonny about the incriminating photo. 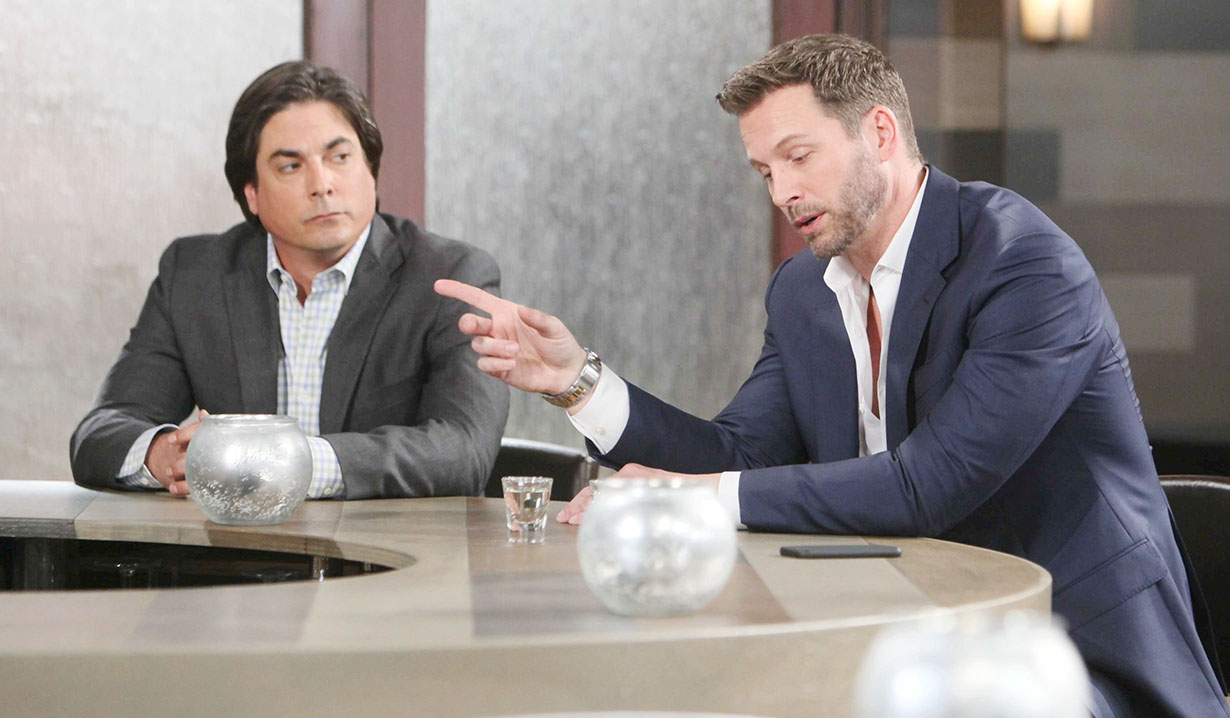 At Salem Inn, Lucas is blown away when Bonnie, as Adrienne, breaks things off with him, stating she wants to be with Justin. Lucas can’t accept it so she gets nasty and says she’s been thinking about Justin the whole time they were together. Lucas senses something is off and refuses to believe her so she makes cruel remarks, causing Lucas’ anger to flare. She hands over the ring and he takes it and plods out. Hattie arrives. She struggles out of her suit jacket and shoes, uncomfortably, then digs out some booze and they drink to starting over. They get into loud, colorful blouses and watch an adult movie, screaming with glee that they can charge it to Adrienne’s tab. They find it hot for a while until something happens that makes them quickly tune out in shock. Bonnie admits she had a hard time not jumping Lucas’ bones when she dumped him. Bonnie thinks Roman will be able to please Hattie. In his cell at SPD, Sonny wonders if he really did kill Deimos. Chad appears. “Maybe you did,” he says. They bitch and moan then Chad flashes to seeing Sonny getting up from kneeling over Deimos’ body and saying that he gets it. He wanted Deimos dead. Sonny claimed he didn’t do it. When Chad offered to wipe off the knife, he urged Sonny to keep watch. Sonny starts to remember. He remembers helping Chad move the body. They think on it more and Chad recalls that Sonny was looking for the amulet when he found him. Maybe the person who killed Deimos has it. Gabi visits a weak Abigail in the hospital. She’s supportive and sorry for what Dario put her friend through. Abigail says what her brother did isn’t her fault. Gabi lets Abs know she and Chad are over. Abigail’s sorry, knowing this is hard on her. Gabi says she saw it coming and thinks Chad belongs with Abigail. They ponder whether or not Chad killed Deimos and then Gabi whips out a tablet of photos and videos of Thomas, and gives it to Abigail. Abby’s touched and asks Gabi if she’ll continue to be a part of her life. Gabi tears up. She’d love to. They look at the tablet together.

Brady stops by TBD. The bartender gets him a drink and Brady stares at it. Lucas pops in and sees the drink. “You too, huh?”

More: Swooning over beloved soap characters who touch our hearts

At the square, Eric calls Nic to let her know he’s off to get the photos for her. She’s thankful. They disconnect and Eric stops John from wandering aimlessly. Eric asks what’s up and John spills everything about “Marlena” dumping him. Eric says it doesn’t sound like his mother. John agrees but blames himself for taking his wife for granted. Still, they both agree something is off. Eric goes off to talk to his mom. Marlena wakes up in a straightjacket and in a padded room. “Help. Help me. I don’t belong here,” she croaks, groggily. She becomes agitated and an orderly walks in. She tells him she’s not Hattie. The man says that’s what Dr. Evans said that she would say. Marlena has a fit, stating there’s been a terrible misunderstanding. She asks to see Dr. Ross but he’s on holiday. Marlena tells him this is an emergency and they’re colleagues. The orderly says she’s to receive no phone calls. He goes to get her something to eat and when he returns, she asks him to turn off the annoying music, which she says is enough to turn a sane person crazy. She talks him into letting her out of the straightjacket and tells him that her own sister had her committed years ago when it wasn’t warranted. He leaves her to eat and once he’s gone, she pulls out a cell phone, she stole from him. She calls John.

At the Kiriakis mansion, Maggie tells Nicole that Brady thinks she’s cheating on him. Nicole freaks out and calls Brady, who ignores her call and downs a shot with Lucas, who tells Brady that when Adrienne dumped him, her eyes said it all. There was no love in them. Soon, they’re drunk and joke about jousting the other men. Lucas identifies with being lied to from Nicole and starts to laugh, remembering that Nicole cheated on him with Eric, too! Brady says to watch how he talks about his trashy girlfriend. Lucas scoffs that Nicole was his trashy girlfriend first. He complains that he was cuckolded from every woman he’s been with. Brady takes off. Lucas falls asleep and wakes up with Chloe grabbing his drink and asking him what the hell he’s doing.

Brady arrives at Eric’s room at Martin House and searches for his brother’s camera. Instead, he finds the cursed amulet.

Eric turns up at the Salem Inn and hears Bonnie and Hattie dancing and singing inside Adrienne’s room.

Brady discovers the amulet in his brother’s room. 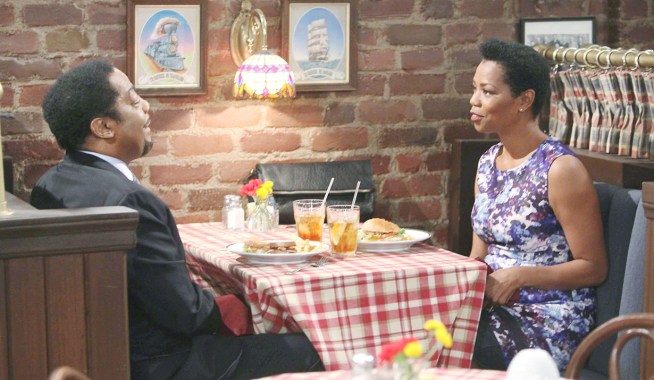 Marlena's caught and punished for calling John with the orderly's phone 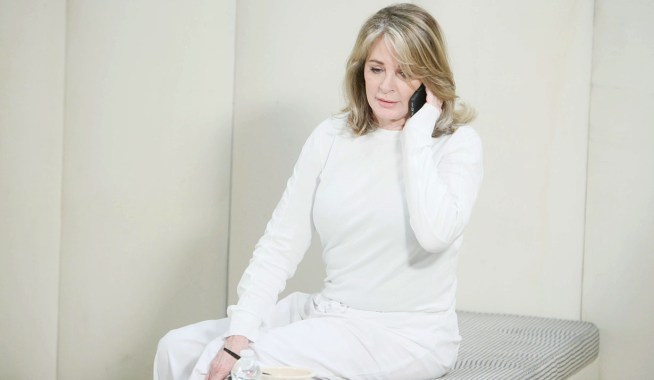