Friday July 28, 2017: Theo gets his laptop back, Claire has some interesting things to tell Steve about Tripp, and there's a terrible accident. 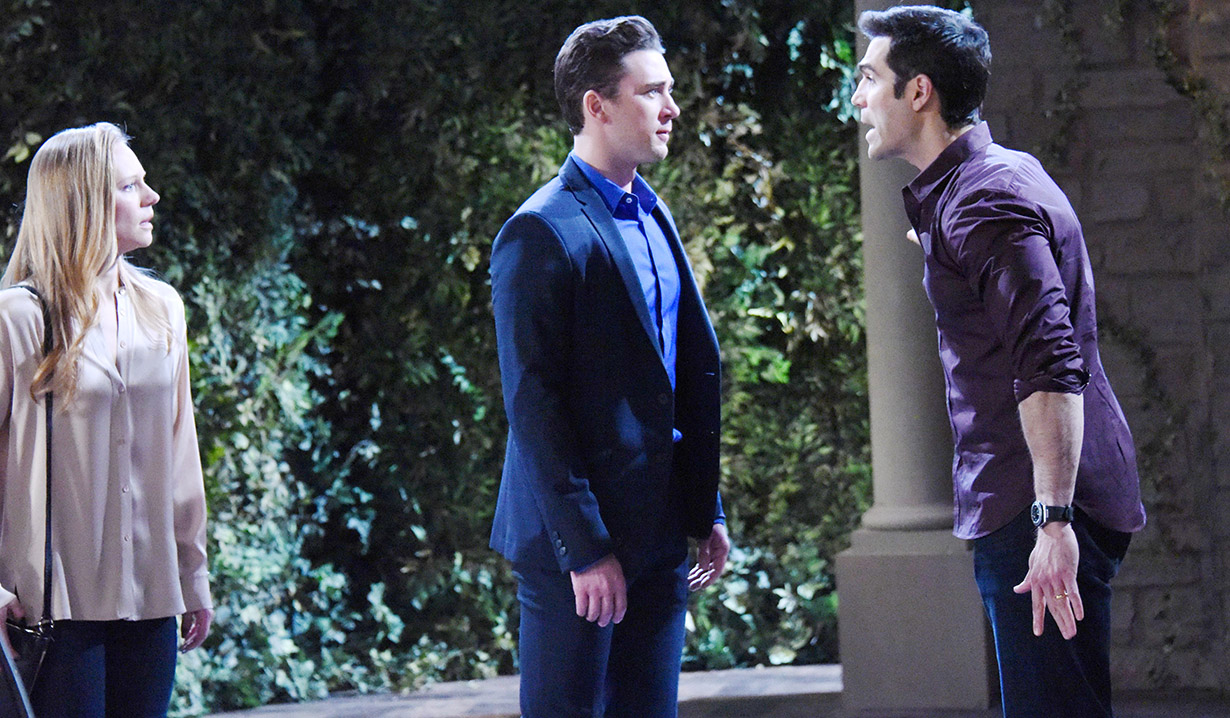 At the park, Hattie tells Anjelica that ‘Bon Bon’ is on board to get back at “old Red, the dame who stole her man.” Anjelica asks Hattie to use her influence to get Bonnie out of jail. Hattie says it’ll be easy but will happen after she trades places with Marlena. Anjelica gives her the keys to Marlena’s townhouse.

More: Our salacious soaps are inspiring to primetime TV

Marlena visits with Roman at the pub and hands over a recent photo of Johnny and Allie. Roman’s touched. They commiserate over missing the kids, then chat about Kayla’s suspension and Sonny’s incarceration. Marlena says they’ll know more about Deimos’ murderer when John gets home in an hour. Roman notes she sounds off. Marlena respects John’s work but she’s lonely. Roman’s sure they’ll work it out. They’re the perfect couple. Doc asks about his love life. He laughs at that but is fine being single. The old friends hug and as Marlena leaves, a man makes a call to Anjelica to tell her that the psychiatrist is heading home.

Kayla finishes packing her office at the hospital and takes Steve and Tripp with her to confront Shelly. When they approach the nurse, she’s on edge and feels persecuted. Steve tells her that they’ve reason to believe the entries in the patient charts were changed after Kayla updated them. Shelly refuses to let them pin this tragedy on her. Steve asks why she didn’t tell him she almost killed Hope Brady. She glances at Tripp, surprised, and clarifies that she was following the dosage in Dr. Johnson’s chart. Shelly says she doesn’t have a problem speaking up. She respects Kayla, calling her a damned good doctor. She’d never compromise a patient’s care to settle a score.

At the loft, Claire catches Joey thumbing through photos of Ava. He tells her about the conversation with his brother about Ava which Claire assumes has caused his guilt to resurface. She says Jade slipped up once which made her think Joey was responsible for Ava’s death. She promises that it’ll stay between them. Theo walks in and Joey runs off while Theo tells Claire he’s got a problem. He’s trying to help someone in trouble. Abe interrupts and talks to his son about what he’s working on with DiMera Enterprises. He hopes his son will choose the right path and hands over the laptop. He apologizes. Theo thanks him and loves his dad but says the DiMera’s are his family too. Abe accepts that. They hug. As soon as Abe leaves, Theo jumps on his laptop and deletes the damaging photo.

Chad appears when Abby and Dario are on their way out of the Martin House. He confronts her about abandoning their kid. Abigail frets. Dario’s impatient and nags for Abby to hurry up. Chad tells him to shut it and Dario gets physical. Chad gets hold of Dario’s neck as they snipe at each other. Abigail sends Dario to the car with the bags. Eyes pleading, she tells Chad she has to do this. She goes and he tears up. He follows her outside and says he knows she’s keeping something from him. “I’m doing it for you,” she reveals, cryptically. He tries to make sense of that. Abby cries and Chad reveals he can’t stop thinking about what they’ve had together. Abigail’s eyes widen. He tells her she complicates his life and shows her the wedding band that caused a fight between him and Gabi. Abby’s sorry. Chad’s longing and sadness turns to anger and he yells at her to leave and to stay dead. Dario returns and the men argue. Theo calls and tells Abigail that the photo is deleted. A car drives up and Dario flies out of the way while Abigail screams Chad’s name.

Back in the park, Anjelica pushes Hattie to get to Marlena’s townhouse – now.

Back at the pub, Roman can tell Joey’s got a lot on his mind as he busses tables. Joe reveals the closer he gets to Tripp the guiltier he feels. Roman’s supportive.

Marlena prepares strawberries and whipped cream and slips into a nightgown at the townhouse when Hattie lets herself in, shocking Marlena.

Back at the hospital, Claire slyly gives Steve the Candy Striper schedule as Tripp explains that they’re looking for the person who set Kayla up. Claire is disgusted at the thought and sings Kay’s praises. Tripp bites, “Kayla’s not as perfect as everyone thinks she is,” causing Steve to look up, flabbergasted. He hands Tripp the charts and asks him to do some sleuthing in them. While he’s gone, Steve questions Claire about Tripp hanging around the hospital and she says he’s always there, mostly at the nurses’ station. Steve looks suspicious.

Steve’s suspicious of his kid.

Abigail is rushed to the hospital...