Thursday July 27, 2017: Abigail and Dario argue about her going into Witness Protection, Gabi and Chad make up, Rafe is incensed after hearing his brother's out on bail, and Kayla packs up her belongings at work. 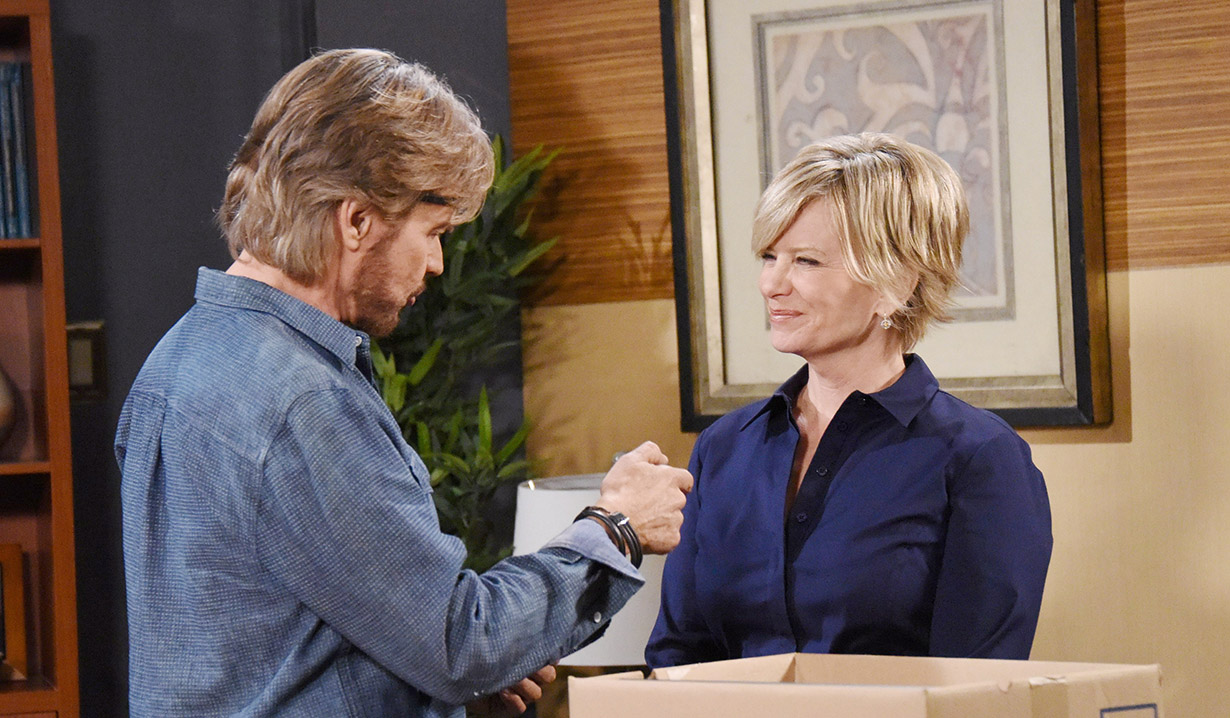 At the hospital, Kayla and Steve pack up her office and she tells him she’s been temporarily replaced. They jump on Kay’s computer and scrutinize the dates that her patients were given the incorrect medication dosages. Shelly was the only nurse working during those dates. Kayla struggles to believe Shelly would do something so malicious. Steve says she was fired from her last nursing job for insubordination. Kay cries as she reads old notes from patients she has saved.

Tripp and Joey head into the loft after a run. Tripp shows Joe pictures he received of Ava. He wishes he would have gotten to know his mother. Joey shakes his head and in so many words says Ava was dirt, but he’s glad to have him in his life as are their parents. Tripp scoffs that Kayla’s no saint. Joe asks him not to buy into what Jade says and grins when he says he’s a little pissed that his mom brags about Tripp so much. Tripp looks guilty when Joe mentions his concerns that if his mom can’t be a doctor, it’ll kill her.

More: Primetime shows are soapier than ever

At the mansion, Chad tells Gabi he spoke with the jeweler about selling Abigail’s ring. Gabi’s sorry for “being a bitch” last night but Chad would have acted the same if Gabi kept something of JJ’s. They hug and make plans for lunch. Gabs finds out that Dario’s been arrested and rushes out. In the foyer, Andre calls Abigail to tell her that he has someone watching Abe’s house. They’ll delete that photo from Theo’s laptop as soon as they can. Abigail disconnects when Dario arrives home and lies that she was speaking with Jennifer. Back in the lounge, Andre finds Chad and asks why Gabi rushed out of the house. Chad tells him about Dario’s arrest. Andre tries to get rid of Chad by asking him to go see Lucas about their cyber security. Abe arrives to discuss his displeasure over Theo working at DiMera. Andre and Chad sing Theo’s praises. Andre asks for the laptop back so Abe agrees to it if they fire Theo. Chad’s offended. Stefano’s no longer running the company. Things have changed. Abe gestures toward Andre, knowing that he thinks doing things on the up and up is ridiculous. Abe suggests if he wants the laptop back he’ll fire Andre instead. Andre bursts out laughing.

At SPD, Rafe tells Eli that he’s concerned Dario’s a flight risk. Eli says bail was the only way to ensure their deal goes through.

More: Summer in the Vineyard on Hallmark

Back at Martin House, Dario and Abigail argue about her going into Witness Protection. He threatens her with the incriminating photo of Chad. He starts to pack when Gabi arrives to yip at her brother for getting himself arrested. Dario says, “It just happened.” Gabi turns to ask if it’s true that Abs married Dario so he could get his green card. Abby says it’s true. Dario forces her to admit rather tearfully that she’s going away with him, causing Gabi to get in her brother’s face and ask if he knows what he’s asking her friend to give up. Dario asks her to stop busting his chops and hugs her. She runs off and Dario insists Abby has made the right decision. Abby says she’ll go with him but she’ll never love him. Eli calls and says the deal went through. Now, Dario has to come by SPD to give up his partner. While he’s in another room, Abby calls Andre for an update. Andre reveals that they don’t have the laptop yet. How will she delay this? Andre vows to think of something. She disconnects when Dario returns and he questions her. She lies that she was saying goodbye to her mom. Dario feels bad.

Gabi returns home and tells Chad about Dario’s deal and that Abigail’s going into Witness Protection with him. She’s confused and Chad refuses to let her abandon their son again. Gabi tries to tell him more but he runs over to see Abby.

Tripp goes to Steve at the hospital and they discuss Kayla’s predicament. Steve promises he won’t stop until he finds out who is setting her up. He’ll make them pay.

Back at SPD, Rafe learns that Abigail’s going away with Dario. He’s puzzled and since Eli looks nervous, he can tell his brother is giving up a big fish. “Something is not right,” he states.

Chad stops Abigail and Dario as they leave The Martin House.

Steve is shocked at what he realizes about his son.