Days Recap: Gabi’s insecurities cause a rift between her and Chad

Wednesday July 26, 2017: Dario's surprised to learn Abigail is on to him, Gabi wonders if Chad would rather be with his ex, and Abe is pissed to hear his son is working for DiMera Enterprises. 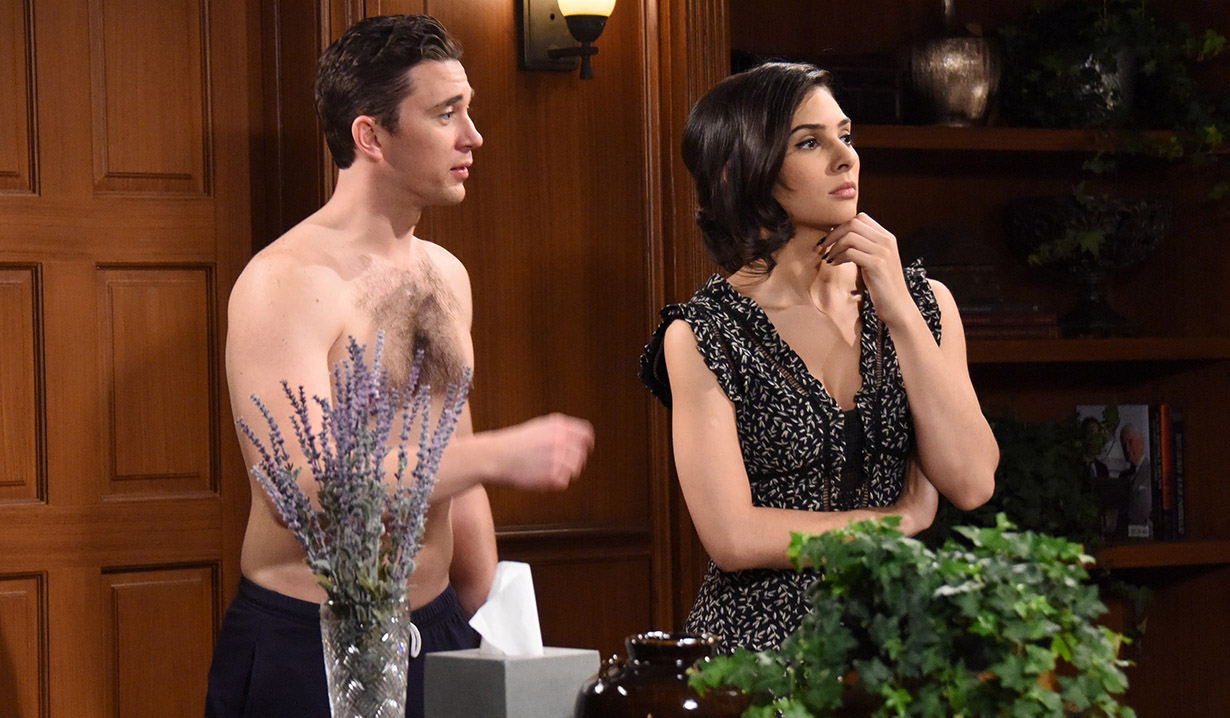 Kayla takes care of the pub’s accounting since it’s not Roman’s forte. She dines on clam chowdah and admits to Steve that she’s trying to keep busy so she doesn’t think about what she’ll do if she can’t be a doctor. Steve comforts her. They share a tender moment. She asks if he’d rather be in Greece looking for Deimos’ killer. Steve says no – he calls Kay his first priority. He has Kayla close early and as she’s telling the kitchen staff, he steps out. When Kay returns, she sees the darkened room lit with candles. Steve hands her a yellow rose. She’s touched. As he uses sign language along with words to express, “Happy Anniversary, Sweetness,” he hands her a bracelet. They kiss and drink beer, then share a dance.

Kate tells Andre that Mr. Yu caved. Andre is glad for the good fortune but both are concerned that Theo may not be able to erase that photo of Chad leaning over Deimos’ dead body before he’s sent to prison. Upstairs, Gabi shows Chad the ring she found on their bed. She starts to make assumptions that he’s planning on proposing but Chad quickly lets her know it’s Abigail’s ring. Gabi’s upset. Why is he carrying his ex-wife’s ring around? He tries to explain but Gabi feels things have changed between them since the night they were drugged. Gabi asks outright if Chad would take Abigail back if she dumped Dario. He takes too long to respond which makes Gabi feel more insecure. They argue and he says he’ll sell the ring tomorrow. In fact, since she doesn’t want to see it, he decides to bring it downstairs.

More: Y&R’s Peter Porte in Love at the Shore

Theo’s ready to delete the photo of Chad when Abe and Val walk up. Theo hides his laptop and Abe demands to know what he’s hiding. Theo tells him about working for the DiMera family and that’s all Abe needs to hear. He confiscates Theo’s laptop.

At SPD, Dario blackmails Abigail for the second time, asking her to come with him into the Witness Protection Program or he’ll show everyone that disconcerting photo of Chad. Abigail’s pissed. Dario claims he loves her. Abigail says

she’ll never love him, never leave her family to be with him. Dario forces her hand so she smacks him hard, across the face. If he cared for her so much, why would he trick her into marrying him? Dario’s shocked to learn she knows he’s been manipulating her. He insists he did it because he loves her. Abigail threatens to delete the photo but Dario says he’s backed it up on a few different clouds and servers. This doesn’t scare Abby, which makes Dario wonder what she’s up to. In the outer room, Eli tells Lani that Dario confessed but gave up his partner and in return asked to go into witness protection. Lani’s shocked. Unfortunately, Eli can’t tell anyone who it is until they’ve vetted Dario’s claim to ensure it’s legit. Eli interrupts Abby and Dario so she leaves. Eli tells Dario the FBI has accepted his deal. Dario asks him to make plans for Abby, too.

Abe and Val wander the square with Abe bitching about his son working for the DiMeras. Val guesses he kept it from his father because he knew Abe would respond with anger. She’s sure that since Chad’s been involved, they’ve changed their ways. Abe nods. They’re making up for past sins. Still, he’s fearful that history will repeat itself. Val points out that Theo’s a good kid who knows right from wrong. “So did his mother,” Abe says, but it was a battle for her to resist Stefano’s influence. Theo spending time with Andre is worrisome. Val tries reasoning with him when he wants to open Theo’s laptop, worried he’ll see it as disrespect. He decides to leave it be and asks to go back to their romantic evening. They snuggle close and share frozen yoghurt. Abe gives Val a necklace and she kisses him in thanks.

Theo rushes into the DiMera mansion and tells Kate and Andre what went down at TBD. They’re aghast that he was unable to delete the photo. Andre calls Abe pompous until Kate reminds Andre that Abe’s Theo’s dad and is just being cautious. Theo worries Abe will see the photo. Andre snipes that they’ve got to “protect Chad at all costs,” just as he walks into the room. He confronts the room and they lie before filing out after Theo. Chad tosses Abby’s ring into the desk. He goes back upstairs to Gabi and apologizes. He should have gotten rid of the ring long ago. Gabi’s thankful. She rolls over and goes to sleep.

More: How primetime television takes cues from our soaps

Abigail runs to Theo at TBD and learns that their plan hit a snag.

Kayla packs her office up at University Hospital.

Days Recap: Dario sells out his...