Days Recap: Dario sells out his partner, making a deal with the FBI 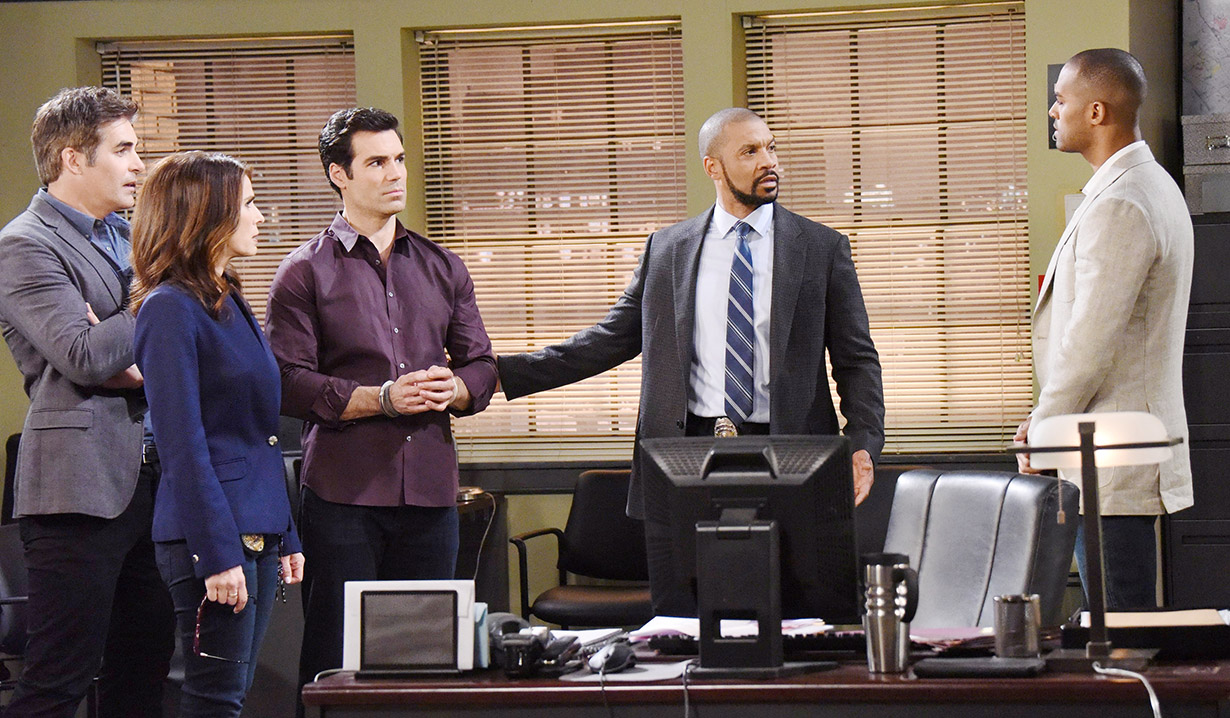 Gabi brings lavender into their bedroom. Chad’s mind is on his meeting with Abby. Gabi rubs his shoulders on the bed. Chad fills her in on her brother’s counterfeit operation and how he’s been stealing from DiMera Enterprises and Gabi jumps up, furious. She thought her brother had changed. Chad says he’s waiting on Abby to shut him down but if she can’t the cops will have to be notified. Gabi gets more upset and wants to see her brother. Chad holds her and tries to calm her as she cries in his arms. He calls her fierce and says she doesn’t have to take on everything herself. She has him. She relaxes and apologizes for her meltdown. She shoos Chad away for a shower and later finds a ring on the bed…

Theo finds Abigail on a call asking when she can see Dario. She disconnects and updates Theo.

She thinks he has his cell phone with him. Theo says he at least hacked into the cloud but needs to know what the photo looks like or the date on it. Abby confides about the photo implicating Chad in Deimos’ murder. Theo’s visibly upset. Abby’s sorry for getting him involved but Theo vows to find the photo and get rid of it, permanently. Fidgety, Abby runs to the SPD. Soon, Abe appears.

At SPD, Rafe touches Dario’s cell phone and Dario gets antsy, asking for it back. Rafe’s suspicious. Dario claims to want to contact his lawyer and wife. Raines steps in and tells Hope and Rafe they’re off the case. Eli interjects and says that the FBI is taking over the investigation. Raines is pissed but Eli pulls rank and takes Dario into the interrogation room. Dario asks for a deal. Abigail arrives and asks for answers but Rafe has nothing for her. She spots Dario’s phone and grabs it! Hope takes it back. It could be evidence. Meanwhile, Dario has already told Eli something huge. Eli suggests he talk with his lawyer but Dario doesn’t need it. Eli can agree to his terms – or not. Eli leaves the room and tells Abigail she can see Dario. When she does, he lets her know he didn’t sell Chad out. She’s thankful. He tells her he gave up his partner and will go into the Witness Protection Program. He’ll keep quiet about Chad if she goes with him.

Jenn goes to see Brady at the Kiriakis mansion. She confronts him about pushing her toward Eric in order to keep his brother away from Nicole. Jenn calls him jealous. She knows Eric would never come between his brother and his fiancee. Brady agrees but recalls that Eric was Nic’s first love. Jenn finally gets him to admit he’s jealous. Brady apologizes for getting her involved. She forgives him. Brady brings up the kiss and Jennifer’s surprised. She had no idea but knows it happened as a result of the Halo. Brady asks if she still has feelings for Eric. Jenn isn’t sure but knows they’ve no future because of Eric’s unresolved feelings…She trails off and Brady realizes unhappily that those feelings are for Nicole. Jenn says she’s only assuming. Brady will try not to let this come between the three of them. He asks her not to let pride get in the way of her own happiness.

More: Summer in the Vineyard on Hallmark

Nicole finds the letters Eric addressed to her in his desk. She questions him but he doesn’t want to discuss them.

Talk turns to work and Eric can’t concentrate. He tells her he thought he’d find peace by writing the letters and blames himself for Nicole losing Holly. He finds a lighter and is about to burn the letters when Nicole yells, “No!” She says she’s as guilty as he. They both loved Daniel and she knew Eric was suffering and didn’t care. She feels she let Daniel down by hanging on to her anger. In tears, she asks if she can read the letters. He hands a wad over and leaves her to it. She reads them. Eric returns and she asks if she can keep them. He allows it. Before she leaves she says, “Eric, I forgive you.” She goes and Eric struggles with his feelings.

Abe’s pissed when he finds out what Theo’s up to.

Steve plans some romance for his woman.

Frozen's Olaf to Get Own Series — Watch a Sneak Peek