Monday July 24, 2017: Hattie goes to Bonnie Lockhart for help in sticking it to those she hates, John and Paul talk to Xander about Deimos' murder, and Jenn makes donuts. 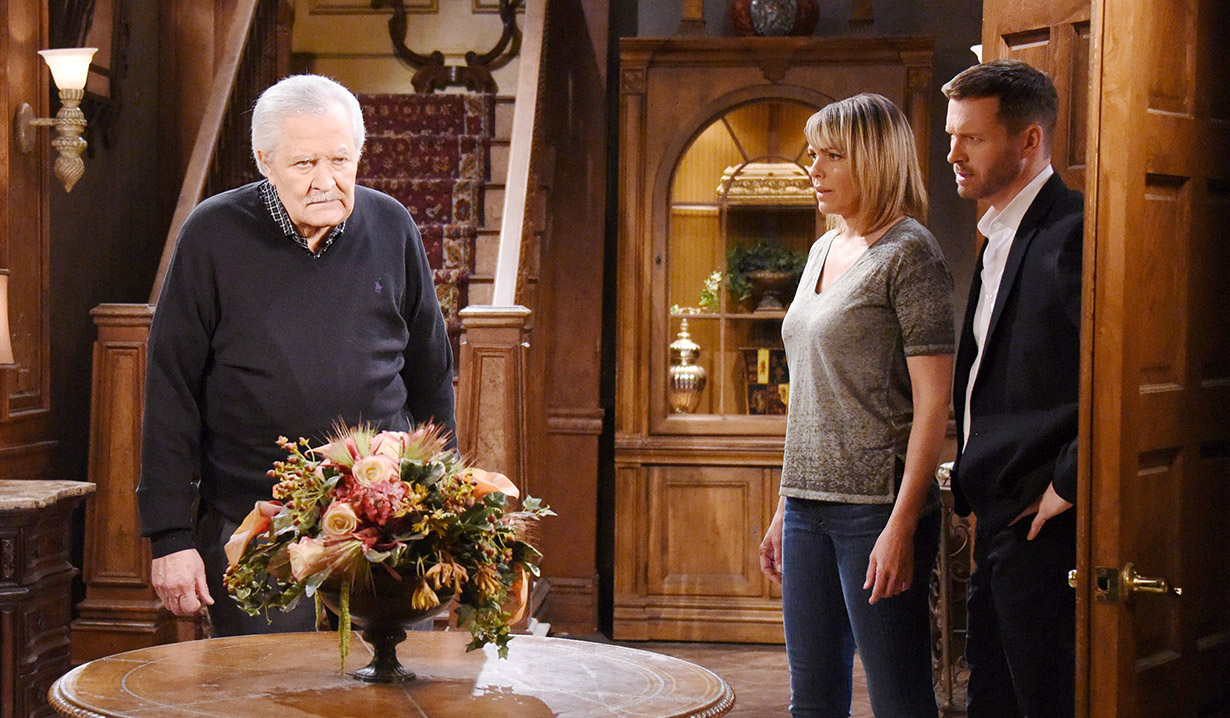 Jennifer is about to leave some of Alice’s donuts at the Martin House that she and Julie made when she runs into Eric who comments that they smell like heaven. Jenn gives him one. He moans in pleasure after eating it. Jenn tells him that’s due to the special ingredient of Alice’s which is love. Jenn mentions that she brought him up to Brady and said they were destined to be friends but Brady urged her to give it another shot. Eric knows why, and tells Jenn about getting close to Nic when they were under the influence of Halo. He asks her to keep that a secret.

Nicole finds Brady in the parlour at the Kiriakis mansion. Brady sighs that Sonny’s arrest is making the Titan shareholders antsy. He wipes off some

smudge on Nic’s face. She laughs. She and Tate were digging up worms. They hear something crash. They rush to the foyer where Victor has deliberately broken a figurine. He says he’s upset Sonny hasn’t been freed yet. He refuses to let him spend his life in prison and plans on confessing. Brady and Nicole know this won’t work. They’ll have to find the real killer. Maggie arrives after seeing Holly. Nicole grills her for information and they look at photos together. Nic notices that Holly cut a tooth and is overcome with emotion. Maggie knows the worst feeling is to have your child taken from you. She says to go on with life and have faith that they’ll get Holly back. Nic’s upset to be missing out on her firsts. Maggie says they’re taking videos. Nic thanks both of them for helping her stay sane. She goes and dresses and returns looking gorgeous. Brady comments on that and asks if Eric is working today. Nicole reminds him that they were out of their mind when they kissed, to relax Brady’s anxiety. Brady can’t help but be bothered by that kiss. Nic loves Brady. They kiss. He plans on canceling his meetings and asks her to text when she’s done.

In Greece, Xander tells John and Paul that it’d have taken someone as powerful as Victor Kiriakis to kill Deimos. Paul argues that Victor would never sacrifice Sonny. He loves him. Xander says he’ll tell them everything they need to know if they help him get out of prison. The only thing he asks for in return is immunity. John scoffs but Paul drags him aside. What if he’s telling the truth? John can’t give him a deal unless he gives a full confession and solid proof.

More: Spoiler Digest for all four soaps this week

Adrienne stops Marlena at the hospital. Adrienne’s there for her check-up. She sees Marlena’s paperwork and comments on it. Marlena laughs. Sometimes she wishes there were two of her. Adrienne knows the feeling. They discuss Sonny being wrongfully imprisoned and worry about Arianna being without her daddy. Adrienne gets her clearance from her doctor and then finds Marlena again. They discuss getting together soon. Adrienne’s glad to count Marlena as one of her friends.

Bonnie Lockhart is let into the visitation room at Statesville to see Hattie. “Well if it isn’t my sister from another mister,” she yelps, happily, while the guard smiles and shakes his head. The women embrace. Bonnie says being in prison is bearable just knowing her Meems (Mimi) is living free in Arizona.

Hattie whispers that she can get her friend out of “this hellhole.” Bonnie starts to freak out, thinking she’ll be on the run, eating grubs and woodland creatures. Hattie asks her to close her eyes and think of frozen cosmos, and warm apple pie. Hattie is talking about a dish best served cold. “Rocky Road?” Bon Bon asks. Hattie says – revenge on Maggie Kiriakis. “Old Red,” Bonnie sneers. She’ll never forget that Maggie stole her soulmate in Mickey, and her livelihood. It makes her want to strangle Red. Hattie tells her to take it easy. They can’t kill her but they can get payback. Hattie tells her that Maggie married Victor Kiriakis. Hattie says, “She’s living large, like one of those TV housewives.” Bonnie loves Lisa from “The Real Housewives.” She always thinks to herself that Lisa’s someone she used to know! Hattie gets back to business and shows Bonnie a photo of Adrienne Kiriakis who she’s the spitting image of. Bonnie’s shocked. Hattie reveals if she takes over Adrienne’s life, Hattie will take over “That snooty Dr. Evans.” They howl with laughter and consider living their dreams. Bonnie recalls dusting Maggie’s ugly figurines and if she broke one, all hell would break loose. She’s in! “It’s time for these leopards to change their stripes,” she says, growling.

Jenn meets Brady at home, telling him she has a problem with him.

At the Horton Center, Nicole cries over photos of Holly. She looks for tissue and instead finds Eric’s love letters to her just as he walks in.

Abby and Theo try to save Chad.

Days Recap: Rafe is distressed when...

Days Recap: Dario sells out his...