Friday July 14, 2017: Kayla works at the pub, Jade almost slips up with Tripp, Nicole makes a decision on whether or not to lie to Brady, and Abigail confronts Dario. 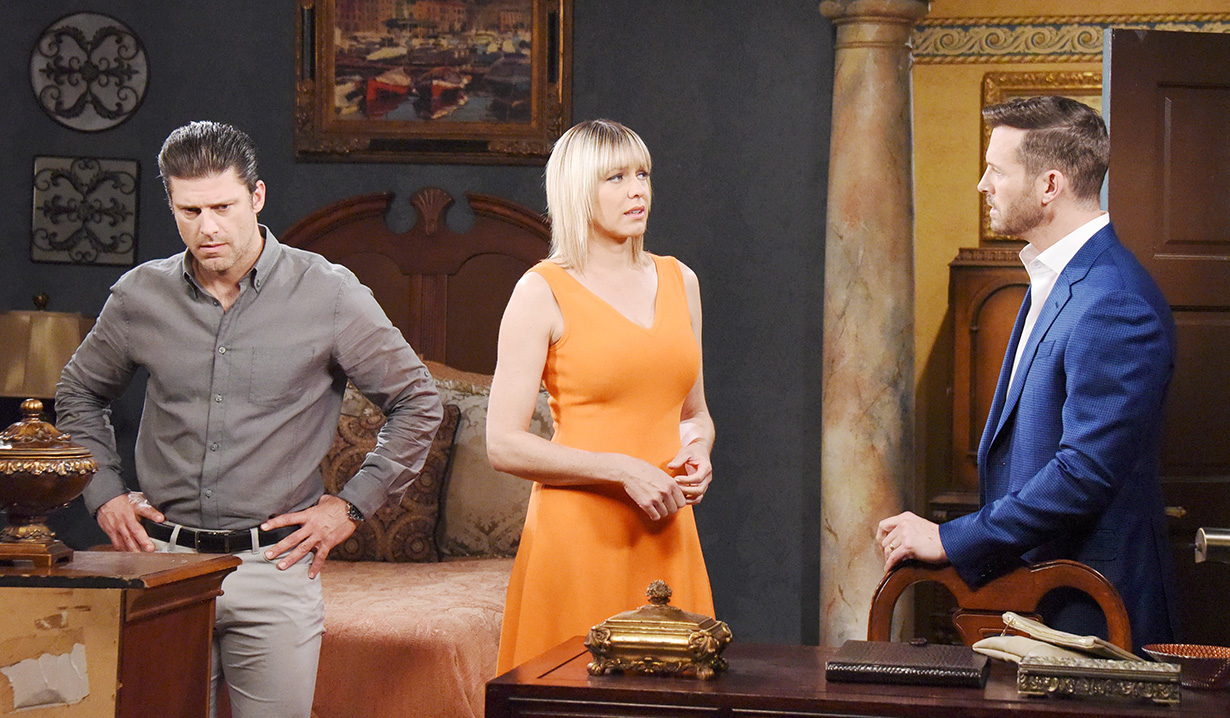 Kayla waits tables at the pub, trying to distract herself from her work suspension. Steve thinks she’s been set up but Kayla doesn’t have any enemies. He offers to investigate. She asks if she gets the family discount. “You get the Sweetness discount,” he tells her.

At the park, when Tripp grabs Jade, thinking she is hiding something about Kayla, Jade backpedals. Tripp tells her their plan worked. Kayla’s on suspension. Jade’s glad and still hates the woman but tells him he should focus on something else now. She claims she cares for him. He’s been a good friend to her. Tripp tells her that there’s one way to get over someone. That’s to go for someone new. They share a passionate kiss before Jade breaks it off, confused. She tells him they need space and she’s going away with her mom this summer. Tripp will miss her but they promise to text.

In Eric’s room at the Martin House, Eric asks if Nicole’s going to tell Brady about their kiss. She’s cryptic, saying, “I know what I have to do.” Meanwhile, in Abigail’s room, she finds Dario’s stash of money under the bed and confronts him

when he comes out of the shower. He tells her it’s earnings from the club for the past few days and that he didn’t have time to deposit it into the bank. She appears placated and takes off. Dario hides the money behind their bedframe. Later, Brady arrives to Eric’s room with an apology for his brother but is jealous that Nicole’s there. She lets him know she had a new memory from the night they were drugged. She blurts that she and Eric kissed. Ticked, Brady walks out.

Abigail arrives at SPD and talks with a co-worker, Mel, (played by Justin Dray), looking for assistance and he owes her.

Abigail lets herself into Dario’s office at TBD with a brown paper bag. She places a bug on the side of his desk. Dario waltzes in, suspicious and Abby says she brought him lunch. He asks her to join him but she has to run.

More: It’s Christmas in July with The Mistletoe Promise

Steve turns up at the hospital and says hello to Nurse Shelly. They discuss Kayla’s case and Shelly radiates a bad attitude. She says a lot of doctors tend to think they’re infallible. Steve says that’s not his wife. He searches for answers and all she can tell him is that the only people who have access to the charts have a password. She snipes that “It’s too bad being a nurse wasn’t enough for Kayla. Maybe then she wouldn’t be in trouble.”

Tripp goes to the pub for a burger and finds Kay. He asks if she’s worried since she seems chipper. She is but she’ll deal with whatever comes. Tripp knows she didn’t mess with the charts. Talk turns to Jade and Kayla’s glad to hear she is out of town because of all the nasty things she did to Joey. Tripp gets on edge hearing Kayla tear down Jade and thinks it’s similar to how everyone felt about his mother. “I guess I’m not as forgiving as you thought,” he says before stomping away. Steve returns and hears how angry Tripp was and that he compared Jade to Ava. They ponder what set him off, then Steve fills her in on his talk with Nurse Shelly, who is now a suspect. Kayla can’t believe that. Shelly’s a good nurse, then recalls having to write her up for putting doubts in her patients minds about the quality of their care.

Nicole follows Brady home to the Kiriakis mansion. He doesn’t want to talk so she asks him to listen and tells him the memories are confusing and that the kiss came after they both thought they saw dead Daniel. She cries as she tells him she could have kept it a secret but she loves him too much to do that. She asks him to forgive her so he does. They run upstairs for a nooner.

More: Paul Telfer to be seen on Days July 17

Back at Martin House, Abigail eavesdrops on Dario. She finds the new hiding spot for the cash and hears

Dario talking to Myron about a new counterfeiting operation he’s got going on. Abby’s head spins as she hears him ask if they have gained access to Titan. Abby goes to the dining room where Eric finds her. She asks for his confidence and tells him all that she heard bugging Dario’s office. She returns to her room and puts the money back. Dario appears with a rose in thanks for bringing him lunch. He asks her to the lake but she has plans with a friend from work. Dario tells her she can quit her job but she likes what she does. She goes and calls someone for help.

In the park, Tripp stares at a photo of his dead mama and vows to take care of Kayla.