Wednesday July 12, 2017: Hope, Rafe and Lani catch a break in their case, Abigail's suspicions of her husband grow, and Claire gets a job. 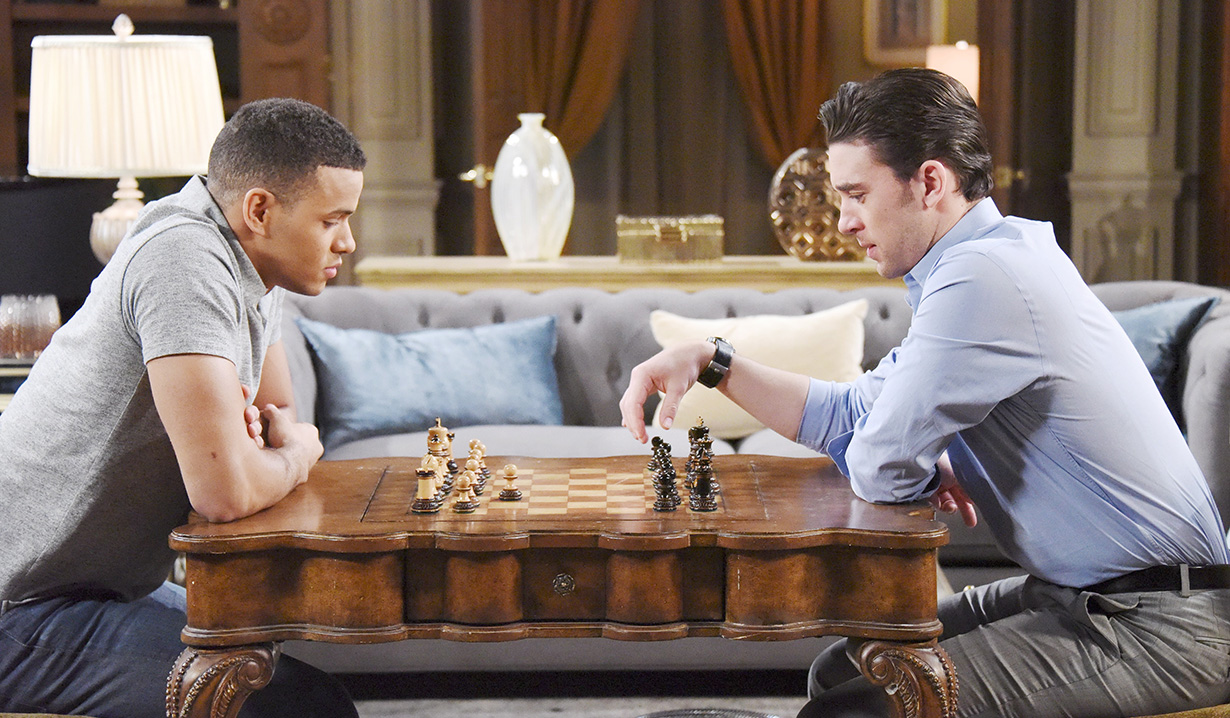 Theo finds Claire working at her new job as a waitress at Mandalay. Claire asks him to order or go, because she’s already in hot water with her boss for taking selfies in the kitchen. Theo takes a seat and asks if they’re still friends. Claire scoffs at that and goes back to work.

Abigail helps Dario fill salt and pepper shakers at TBD. Dario distracts her thoughts which are on JJ with talk of their honeymoon but again, she’s disinterested. She calls SPD and learns JJ was freed. She’s relieved and disconnects. She notes that they closed early due to lack of customers and wonders how Dario has money to go on a holiday. Dario claims to have made good investments and says GDR is doing well. Abs flashes to Hope cautioning her against trusting Dario and once his back is turned she gets on his laptop. He catches her a moment later and has a fit. Abigail covers. Dario calms down and says he forgot to save some files. He takes off with the computer.

Gabi, Chad and Arianna visit with Sonny at SPD. “Give daddy a hug,” Sonny says, hugging his daughter, happily. Gabi says they just returned from Playtime Pete’s, where Ari won a stuffed rabbit named Mugsy. Ari asks her daddy if he is in trouble but he covers and starts talking to her rabbit. When Ari gets sleepy, Chad takes her home and Gabi tries to build Sonny’s confidence, which is wearing thin. Gabi goes and Victor arrives. Vic doesn’t like that Sonny turned himself in. He says the amulet still hasn’t shown up. He grumbles and Sonny says Vic can’t make this go away. “The hell I can’t,” Victor says, determined.

By the dumpster, the divers go over the evidence. Rafe thinks they should talk to housekeeping. He calls to set it up for Lani and JJ.

Lani and JJ arrive at Salem Inn and talk to the custodial manager. He gives them a phone charger that was left behind.

Rafe and Hope arrive at Mandalay to ask questions of a waitress who also moonlights as a maid at Salem Inn. She tells them she found a “dirty magazine” and a phone charger left behind in room 204 and remembers the man as a big tipper. Rafe calls JJ to fill him in and JJ asks the manager to see the second item “Reynolds” left behind. The man hands over the magazine, “Busty Bras Monthly,” which they recall Xander reads. Later, Claire takes Hope and Rafe’s order and they tell her they’re proud that she has a job. Claire’s not sure how long it’ll last before “the Dragon Lady” fires her. Fran, (played by Maria Didomenico), overhears and takes Claire aside and tells her to shape up or ship out. Later, when Claire busts some dishes, Fran makes her hostess instead. JJ and Lani appear and fill the other cops in on the magazine they found which they think belongs to Xander. Hope makes a call and is assured by the cops in Greece that Xander’s still incarcerated.

Theo drops by the manse and starts a game of chess with Chad. Theo reveals he and Claire are broken up. He fills Chad in on the sex tape Jade made and how it screwed everything up. Chad’s serious until he hears that Abe saw it, and then struggles not to laugh. Theo says they argued more when he admitted he trusts Ciara more than Claire. Chad asks if his nephew still has feelings for Ciara. Theo’s not sure. He brings up needing a summer job and Chad hires him to help their tech team, even though Abe will be wary. Gabi interrupts and Theo goes off. Chad and Gabi canoodle and after sex, talk about focusing on each other.

Dario and Abigail arrive at the Martin House and eat strawberries and cake for their wedding night. Later, Abigail awakens with a start and looks to the floor where Dario’s sleeping on a cot.

Claire arrives home and hears Theo on a call talking about his new job. She slams the door and he disconnects. She blathers on about hating her job and her boss and her life, then stomps off to her room, jealous of Theo’s job. Later, she’s asleep on the sofa so he covers her with a throw.

Days Recap: Girls' night out in...