Tuesday July 11, 2017: There's a girls night out at TBD, JJ is released, Lucas walks into SPD and gets an eyeful of his woman with her ex, and Lani finds a clue. 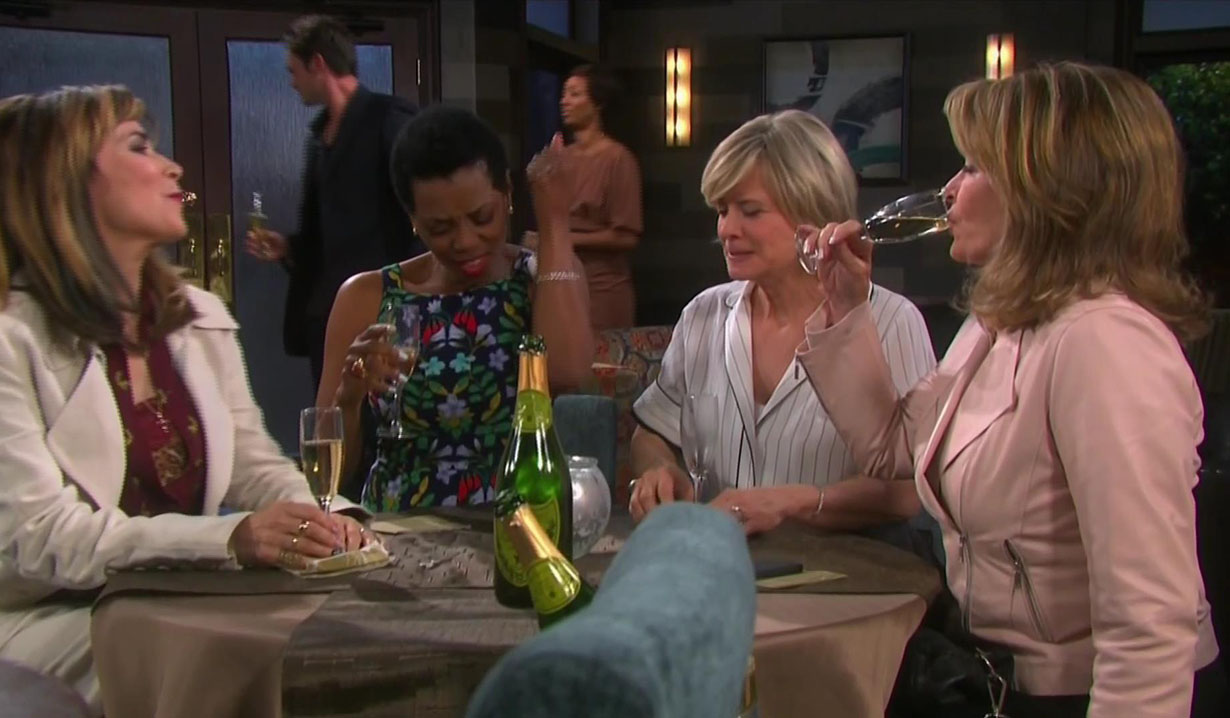 At the hospital, Kayla tells Val that she can’t figure out how she ‘tripped’ up at work and prescribed the wrong dosage on three patient’s medication. She’s losing her confidence. Val feels for her and asks her to come out tonight.

Kate finds Marlena waiting for Val at TBD and keeps her company. Marlena’s glad she’s there. She heard an unsettling rumor that Kate married Andre DiMera. Kate says it’s true. “You’ve lost your marbles,” Doc says. “Is that a clinical diagnosis?” Kate asks, sarcastically. Marlena reminds her friend that Andre is bloody insane. Kate explains the reason behind the marriage.

More: Deidre Hall’s airdate on Battle of the Network Stars

Lani calls Rafe and Hope to the Martin House. She’s found a Salem key card in the bushes registered to Sam Reynolds in room 204. Hope and Rafe go talk to the manager.

At SPD, Raines finishes arresting Sonny as Adrienne cries. Raines allows Paul to accompany Sonny until he’s booked. Sonny bawls in Paul’s arms. JJ interrupts. He doesn’t believe Sonny murdered Deimos and won’t let him go to prison. Raines appears and pulls JJ aside so he can sign his release. JJ’s upset he can’t work the case but Raines says he’s on paid release for now. JJ’s pissed. He calls Lani to let her know he’s free. She asks him to meet her.

Lucas arrives at the pub at Anne’s behest. She tells him she’s been running the Spectator since Adrienne and Jennifer have had issues in their personal life. Lucas is confused. He just got off a plane. Anne reveals Sonny confessed to Deimos’ murder. Lucas runs off to SPD.

Back at SPD, Lucas walks in and sees Justin hugging Adrienne and hears them vowing to be there for one another no matter

what. He interjects. Adrienne’s happy to see him. In the interrogation room, Sonny and Paul profess their love for one another. Paul vows to stand at Sonny’s side. Paul exits as Adrienne pops in with a drink for her son. While Adrienne’s gone, Lucas and Justin agree that Lucas will care for Adrienne while Justin ensures Sonny is taken care of. Lucas and Adrienne leave and Sonny’s booked.

JJ arrives at the Martin House. They hug and she tells him about the Salem Inn key. JJ says he’s off the case but working on the sly. He asks her to keep it a secret. She worries he’ll lose his badge if Raines hears about it. JJ doesn’t care.

A man lets Rafe and Hope into Sam Reynolds’ room. They show the guy a photo of Deimos but the man doesn’t recognize him. The man was in a baseball cap, he says, but checked out yesterday morning. The man leaves and Hope says Deimos wasn’t even alive yesterday morning. They head to the dumpster and try to find clues. Lani and JJ find them. “Woah the dumpster calvary has arrived,” Rafe says. JJ tells them he can’t work the case.

More: How sex has changed in soaps

Kayla and Val arrive at TBD and hear Marlena joking and laughing that at least Kate didn’t marry Stefano again. Val confides that Kayla had a bad day. Kate suggests they go around the table and share. Marlena worries John’s been gone so long that they’ll marry 20 years from now. Kate tells them she married Andre, a man her friends all hate. Kayla shares her work issues and Val admits things are fine with her right now. Kate orders more booze and says she doesn’t want to talk about the men in their lives. They talk about getting parking tickets and which recent movies they’ve seen. Talk turns back to men. Kate wonders if Marlena’s afraid to marry John. Marlena isn’t and Kate mentions that on a scale of who is the happiest, married men are number one and married women are at the bottom of the list. They laugh. Val asks why Kate remarried. Kate jokes that she’s trying to break the town record. Marlena laughs and says Sami’s got her beat. The waiter brings the bill and they all fight over who will pay. Kate thinks the person with the least concerns should pay. There’s laughter until the waiter asks for a doctor to attend to someone in the kitchen. Val and Kay offer to help. They return moments later. The chef cut himself and nicked an artery. The EMT arrived so he’ll be fine. They drink to friendship.

Lucas takes Adrienne to the pub for a milkshake. Lucas wants to take her on a boat later but she can’t. She wants to go home. Anne approaches and says not to worry about the Spectator. She’ll hold down the fort. She asks if she wants her to write the story of Sonny being a suspect. Adrienne blows up and Lucas tells Anne to go.

The investigation produces a new lead.

Chad has an offer for Theo.

Days Recap: After an eyewitness...