Days Recap: After an eyewitness comes forth, there’s an arrest

Monday July 10, 2017: A new lead comes to fruition and there's an arrest made, Hope shows off her engagement ring, and Dario wants to go on a honeymoon. 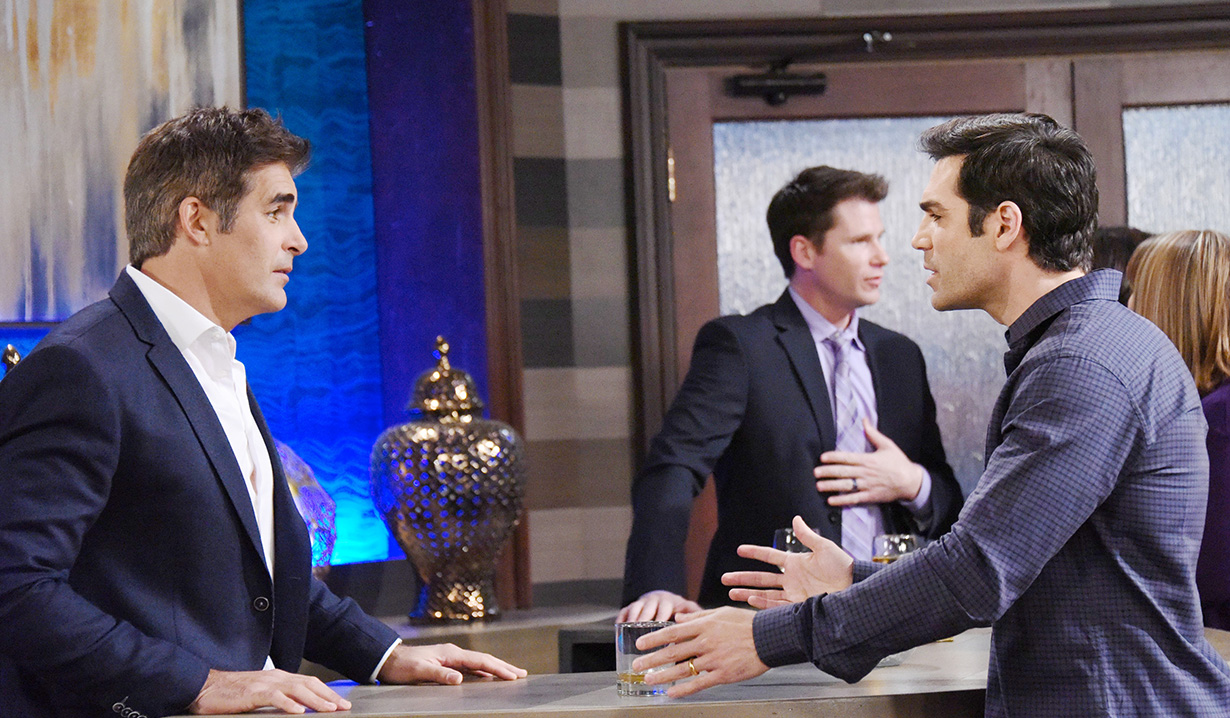 At the Brady’s Pub, Hope feels guilty about taking the night off. Rafe promises they’ll clear JJ’s name tomorrow. Kayla and Steve show up and Hope feigns something in her eye, showing off that humongous engagement rock. There are congratulations all around. Hope wants to wait until Shawn and Ciara return home from Hong Kong to marry. When Anjelica walks in, Steve stops her. She boasts that she can’t wait to stick it to Adrienne. Steve hopes he can stick it to her first. Anjelica goes and Steve returns to his table and drags Kay off to neutralize ‘that woman’.

At the Martin House, Dario flashes to dancing with Abigail and they discuss their meeting with immigration. Agent Gilman shows up. They tell him about their wedding and how Abby’s family friend Abe Carver presided. Gilman says he’s impressed that they’re friendly with the mayor. He notes how well Dario’s doing with Thomas. Gilman doesn’t think they’ll have a problem with the paperwork. He goes and Dario hugs Abby, happy they ‘did it’.

More: Days spoiler video: A twist in the murder case

At SPD, Sonny confesses to murdering Deimos. Adrienne, JJ and Paul try to get him to stay quiet but Raines takes Sonny and Justin into the interrogation room. Raines thinks Sonny wants to get his cousin off the hook or maybe Justin told him the confession was a good way to muddy the waters for the DA. Sonny says that’s not true. He thinks he’s the killer and explains what he recalls. Justin says there were no prints on the knife. There’s no case! Raines goes to call Trask to confirm what none of the other cops seem to get. Outside, some cop talks to the waiter that was at the party. The man stares at Sonny, remembering something. Meanwhile, Raines returns and confirms that since Sonny doesn’t recall murdering Deimos he can go. Back outside, the waiter recognizes Sonny. The cop pulls Raines out of interrogation and the waiter tells the Lieutenant that he saw Sonny leaning over Deimos’ dead body saying, “You got what you deserved, finally.” Raines has to arrest Sonny.

Steve and Kayla stop at the park and Steve explains that he wants to try to get Anjelica on the next flight to New York City.

More: Hallmark’s Christmas in July movies to cool you down

Steve and Kayla don uniforms at Salem Inn and break into Anjelica’s room. Steve says they’ve time since Anjelica is at Chez Rouge. They sift through her belongings, sneezing at the stench of her perfume when they hear her laughing outside the door. They hide under the bed as she gripes about her crappy date to a friend on her cell. She calls Chez Rouge ‘ghastly’ and waves her arm around at the ‘cheap perfume’ she smells, assuming it’s the maid’s. She talks about somebody doing homework and disconnects. She goes to shower while Steve and Kay make their getaway.

More: Deconstructing DOOL: Amid continuity issues Days has improved some

Abigail and Dario arrive at TBD and Hope flashes her rock to them. They congratulate the happy couple and then hear that Dario and Abby got married today. They’re in shock. Hope goes to take a call and Dario says they also played the immigration agent like a fiddle. Dario goes to take a call and Rafe tells Abs that his brother better be thankful to her for all of this. Nearby, Hope disconnects her call and hears Dario tell Myron that “the extra dough” will come in handy. Hope and Rafe get drinks later and Dario shocks Abby with a 2 week honeymoon. Abby’s eyes widen to the size of saucers. How can he afford it? He says he wants to pay her back. He goes and Hope approaches. They discuss the expensive honeymoon and Hope asks her to be careful with trusting Dario’s business aspirations. At the bar, Rafe and Dario do shots. Later, Hope and Rafe have to leave when they learn what’s going on at SPD.

At the square, Steve and Kayla wonder if Anjelica is up to something other than the usual and if she had another kid.

Lucas spots his woman being comforted by her ex.

Days Recap: Girls' night out in...