Friday July 7, 2017: Lucas reacts to Kate's marriage, Victor tries to stop Sonny from confessing, and Gabi wants to be hypnotized in order to help JJ's case. 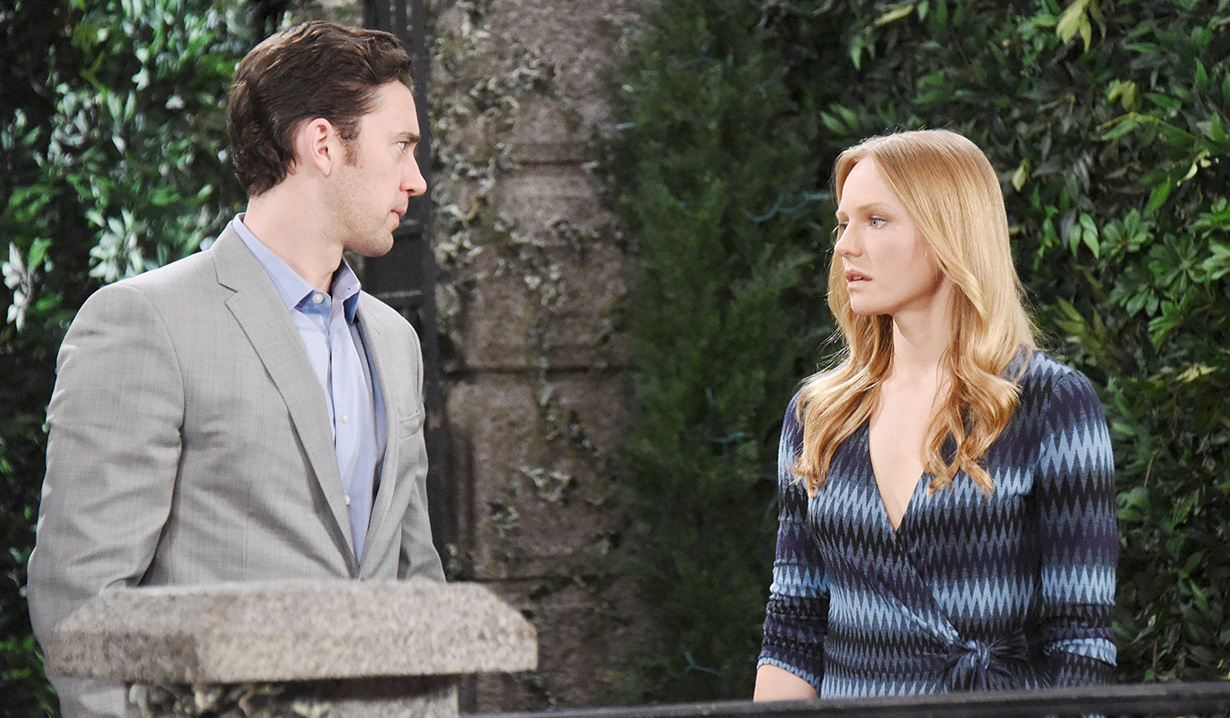 Adrienne and Lucas meet at Mandalay and discuss Deimos’ death. When Austin and Billie call and tell Lucas that Kate married Andre DiMera, Lucas is furious.

More: Days stars show patriotism on the Fourth – in pictures

At the DiMera mansion, Chad flashes to kissing Abigail. Gabi appears. She put the kids to bed. They both want a little romance. When Gabi’s phone buzzes, she thinks it’s JJ and is disappointed when it’s not. Chad notes she still cares for him. Gabs doesn’t think he needs to be jealous. They hear a baby’s cry and Gabi runs upstairs. Chad considers calling Abs.

At SPD, Jennifer tells JJ she knows her son didn’t kill Deimos. Justin’s confident he can clear JJ, though if JJ killed a man, he’s not sure he can live with that. Abigail turns up. JJ notices her wedding ring and she tells him she and Dario married. JJ scowls. “On your lunch break?” Abigail sighs and tries to explain. It does no good. JJ’s pissed. So is Jennifer but she’ll deal with Abigail later. Jenn and Abby head out and Gabi wanders in, wanting to be hypnotized, thinking she can clear JJ’s name.

At the Kiriakis mansion, Sonny tells Paul he thinks he killed Deimos. They debate. Paul says even if it’s true, it was due to the drugs, making Deimos responsible for his own death. Sonny argues that he remembers standing over Deimos’ dead body and is positive he killed the man. He needs to take responsibility. Victor walks in and asks Paul to leave the room. He doesn’t want Sonny to come clean. Adrienne arrives and Paul keeps her in the foyer, telling her that Victor is busy with Sonny inside. Meanwhile, Victor and Sonny argue about Sonny turning himself in.

“I don’t mean to be glib about this but what does it matter who killed him? He drugged an entire house full of people without any regard for any of them.” Sonny goes into the garden and Adrienne and Paul appear. Adrienne goes to make a call and Vic asks Paul to forget about Sonny’s confession. Paul leaves with Adrienne to SPD.

Kate and Andre chuckle as they “toast to Deimos’ grisly death” at TBD. Lucas arrives, hopeful that Austin was hallucinating about her marrying Beelzebub. Kate claims she always tries to be supportive of her children’s choices. Lucas tries not to laugh his pants off. Andre teases that he won’t try to take “Daddy’s place.” Lucas is unimpressed. He tells her Billie thinks it’s a reaction to her getting older. Kate groans. She explains they had to marry or the company would have sold off the assets as there was no DiMera CEO while Chad was away. After six months they can divorce when Chad’s voted back on the board. Kate reminds him he has a few baffling marriages under his hat. Lucas says he wishes he was at the wedding. He could have given her away – permanently.

In the park, Abigail explains to her mom that she and Dario had to marry quickly or he would have been deported. Abigail asks for her support. Jenn shrugs. She has no other choice. They hug. Jenn goes and Chad runs into Abigail. He wants to discuss that kiss. Chad recalls Deimos running down the hall. They ran after him but Chad lost Abigail. Kate and Andre arrive at the DiMera mansion and are interviewed by Country Club Magazine. They get under each other’s skin while trying to one up the other for the reporter. The reporter is confused. Aren’t they newlyweds? Kate calls their marriage contemporary. The reporter wants to take photos of Andre reading a newspaper while Kate pours him tea. Kate would rather be the one reading. The reporter has issues getting them to pose so Andre says, “Think lovely thoughts.” Kate grins. The photo is taken. Andre asks what she was thinking. She glows. “Divorce.” The reporter goes, thinking this will be the most interesting article she has ever done. Andre thinks Kate will grow to love him. She calls that a fantasy. He grabs her and dances with her. “I’m irresistible,” he tells her. She calls him insane and herself the rock in their relationship.

Sonny returns to Martin House to try to jog his memory. He sweats as he hears Victor’s voice begging him not to come clean and Paul’s voice saying he has no choice but to go to the cops.

Back at SPD, Paul and Adrienne arrive. Raines interrogates Paul but gets nowhere. Abs and Jenn return to provide support. Chad shows up to give his statement and asks Gabi to go somewhere to talk after. After they leave, Sonny walks in and confesses to murdering Deimos.

Gabi and Chad wander the square. He comes clean about kissing Abigail and renewing their vows. Gabi says it’s not their fault. It was the drugs. They agree to forget about it.

Hope has a warning for Abby.

Days Recap: Hope has a stunning...

Days Recap: After an eyewitness...