Days Recap: Hope has a stunning response to Rafe’s proposal

Thursday July 6, 2017: Hope ponders what to do about Rafe's proposal, Marlena hypnotizes Lani, Brady's more affected by the Martin House night than thought to be, and Nicole witnesses the extent of Eric's generosity. 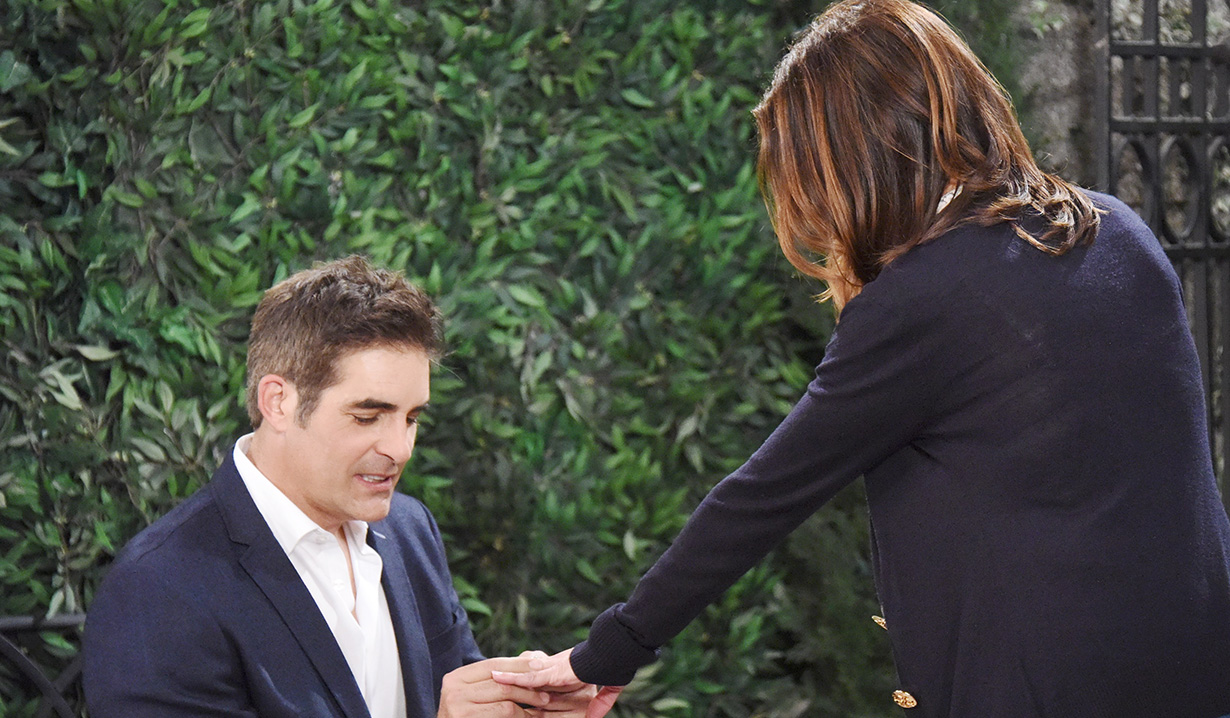 In the park, Hope doesn’t respond ‘yes’ to Rafe’s proposal. Upset, Rafe heads back to work.

More: Galen Gering competes tonight in the Battle of the Network Stars

Nicole arrives at the Horton Center. She and Eric are unhappy that Deimos’ death created more issues for the Horton Center. They discuss seeing Daniel that night and were comforted by it. Nic asks if Eric thinks Dan would want her to forgive him. Eric shrugs. Could she? Nicole’s uncomfortable and leaves as a man, (played by James C Burns) walks in saying he was sent to Eric from the shelter. He has PTSD and says he is looking for work by the water or landscaping. He weeps and Eric offers him work there. The man is thankful and once he’s gone, Nicole returns, having eavesdropped on Eric giving the man money from his pocket as an advance. She questions Eric, knowing they don’t need landscaping. Eric says he has it under control.

At SPD, Lani apologizes to JJ for telling the truth about seeing him attacking Deimos. Eli asks JJ not to believe he killed the man unless he gets the facts. Lani comes up with an idea to find more answers.

More: Ian Buchanan (ex-Ian McAllister) to Bold and the Beautiful

At the Kiriakis mansion, Sonny’s in a panic as he tells Paul that JJ was formally charged with the murder of Deimos. Paul’s upset. Sonny flashes to finding Deimos with the knife in his chest. He gasps that he can’t let this happen to JJ. Brady walks in and rants at Sonny about having to deal with the mess he made of Titan with the massive firings. Sonny refuses to be saddled with Deimos’ people but Brady says most are considering filing a lawsuit for being fired for wrongful cause. “It’s not my job to clean up after your mess,” he grouses. While Brady is happy to have Sonny, whom he sees as an upgrade from Deimos as his boss, he warns that Sonny better step up. Sonny will handle the HR issues and ensure nobody bothers him again. He goes and Paul asks Brady to take it easy because Sonny is going through a lot. Brady knows. He’s on edge about what happened at the Martin House and took it out on Sonny a little. Sonny returns and eavesdrops, touched that Paul’s defending him. Later, once they’re alone, Sonny agrees that Brady had every right to call him out. He’s been distracted.

Marlena finds a contemplative Hope at Mandalay and asks what’s up. Hope reveals Rafe proposed but that she didn’t respond ‘yes’ because she’s afraid. Marlena calls fear normal but says fear shouldn’t stop anyone from doing what they want. Marlena’s paged and has to go. Hope spots Julie and rushes to her with a hug. Julie wonders why there’s no ring on her finger, making Hope realize that she knew Rafe was proposing. Julie tells her all about how they made Rafe run around like a chicken with his head cut off to get the blessings from all the men in the family. Hope laughs, in shock. She isn’t sure if marriage is right for her and doesn’t want to disappoint Rafe. Julie knows Rafe loves her and her kids and also knows Bo would want her to be happy. Hope grins. She knows. Julie wishes she had one more moment with David to tell him how much she loved him. She asks Hope to seize the day.

Rafe arrives at SPD to see JJ. Lani says she wants Marlena to hypnotize her. Rafe nods. Raines wants Doc to hypnotize everyone who was at the party. Marlena shows up and asks everyone to stay as Lani goes under, hoping it’ll trigger memories for them. Once under, Lani recalls being locked up with Eli and a lady with a dog named “Noodle” rescuing them. When Lani becomes agitated, Mar brings her back. They must find that dog owner. Marlena goes and Rafe later learns that Mrs. Garland walks her dog by the Martin house nightly at 8:15 PM. She saw a light on in the garage and thought it was unusual. When she let Noodle out at midnight again, she heard noises in the garage where she found Eli and Lani locked in. She let them out which means they’re in the clear.

Brady arrives at the Horton Center. Nic goes to get something while Brady picks a fight. Eric can tell his brother is upset that he and Nic woke up together at the Martin House. Brady says it’s true.

Rafe meets Hope at the park. She professes her love and explains that her hesitation came from her own fears. She asks him to marry her and he smiles. He gets down on one knee and produces the ring and Hope yells, “Yes! Yes!” Rafe slips the massive ring on her finger and they kiss.

Brady and Nicole return to the mansion and discuss Eric and Nic’s kiss. Brady knows it meant nothing but is still upset at something. In the living room, Sonny confesses to Paul that he thinks he killed Deimos.

Sonny’s faced with a difficult decision.

Gabi and Chad have issues connecting.