Days Recap: Rafe jumps through hoops before asking Hope to marry him

Wednesday July 5, 2017: Rafe's proposal is interrupted, Claire asks Theo to get back together, and Kayla's in trouble with hospital administration. 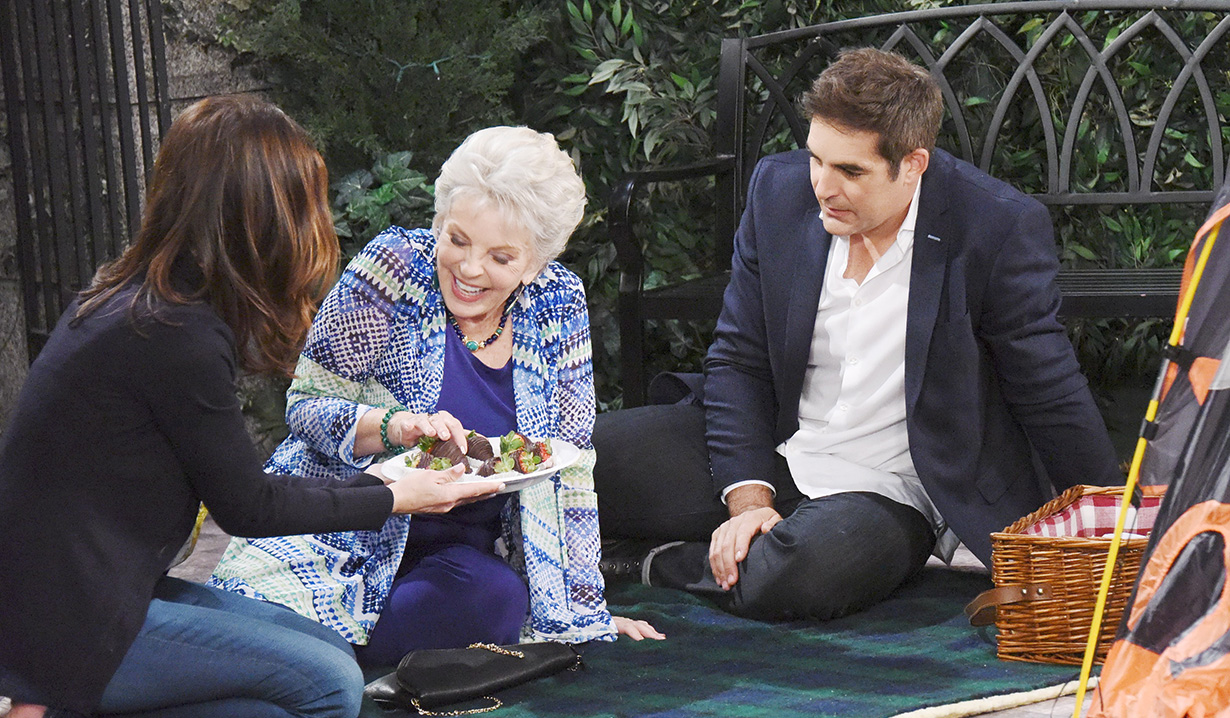 At the loft, Theo and Claire have a blow up. Claire blurts that she wants him back. She admits that though growing up sailing around the world was fun, she needs consistency now. She credits him for making her a better person. Theo smiles. He never thought someone so beautiful would go for him, and likes that she has accepted him like he’s a normal guy – not just autistic. Claire asks to reunite but Theo’s not sure. Upset, Claire runs to her room.

More: Days stars show patriotism on the Fourth – in pictures

At SPD, Hope bemoans having to arrest JJ for murdering Deimos. When she leaves the room, Rafe stares at the humongous rock he bought her. She returns and he hides it. She stresses about JJ again and Rafe asks her to come with him so she can clear her head.

At the hospital, Nurse Shelly brings the hospital administrator Seth Burns with her to see Kayla and Tripp about Mr. Morales being given the wrong medication and the wrong dosage. Kayla’s shocked and denies it. Steve defends Kay but Shelly pipes in, reminding everyone that last week she prescribed Hope the wrong dosage of medicine. Burns thanks Tripp for catching her mistakes. Tripp tries to defend Kayla but Burns says they’re performing an autopsy on Morales which will tell them what they need to know. Everyone goes as Steve hugs Kayla. Later, Tripp returns with Seth. The autopsy results are back. The cause of death was the cancer and there’s nothing to tell them that she gave the wrong medicine or dosage. Steve thinks Kayla deserves an apology but all Burns says is he’ll keep an eye on her.

Rafe takes Hope to the park outside the Horton square. She’s delighted to see a romantic scene with a tent and picnic basket. Rafe pulls out chocolate covered strawberries and Hope notes that his hands are shaking. Rafe starts telling her how he can’t imagine his life without her when Julie pops in. They invite her to sit and she brings up the drugging at the Martin House. While Hope gets Julie something to drink from the tent, Rafe whispers politely to Julie to get lost because he’s about to propose! Julie’s excited but thinks he needs Doug’s blessing, even though she’s a grown-assed woman. Julie says Doug’s at the square so Rafe runs off.

Rafe arrives at Mandalay and sees Doug. Rafe shows Doug the ring box and Doug grins widely. Rafe asks for his permission to marry his daughter. Doug clutches his heart. He’s touched. He gives his permission but thinks Rafe should ask Victor Kiriakis, too. Rafe sighs and grins warily and then rushes off. Back at the park, Hope returns from the tent with a drink and Julie tells her that Rafe went to get something to make the picnic even better. Claire turns up and sadly tells them that she and Theo are broken up. As they talk, Claire realizes she has to show Theo why he fell for her in the first place. She jogs off.

Rafe arrives at Victor’s and shows him the ring. He wants to ask Hope to marry him and states that he’s not looking to replace Bo. Victor grins. He understands. He knew when he married Maggie, he couldn’t compete with the likes of Mickey Horton but he could give her his love and fidelity. Rafe says Bo gave him his blessing to be with her before he died. Victor nods and suggests he go see Roman now. Rafe looks exhausted but agrees.

Theo finds Roman at the pub, and asks for a job. Roman would love to hire him but doesn’t need him. Theo says he has to move out of the loft and worries he’d be in the way of his dad and Val if he moved back home. He goes and Rafe appears. He shows Roman the ring and asks for Roman’s blessing. Roman says he doesn’t need his blessing or anyone else’s. “Just follow your heart,” he says, so Rafe does just that.

Back at the square, Hope’s growing weary, waiting for Rafe. She wonders if there’s a problem. Julie urges her to relax. Hope thinks her step-mom knows something and gives her 60 seconds to spill it. After a few seconds Rafe rushes up, breathless. Julie thanks God and runs off while Rafe gets down on bended knee to ask again, showing her the ring. Hope tears up…

Claire arrives to the loft. Theo is trying to create a resume. Claire helps him write out his past experience, noting he’ll be more than qualified to get any job he wants. Theo gazes at her and then jumps up. He tells her he’s going to move out.

Rafe is thrown by Hope’s response.

Days Recap: Hope has a stunning...