Tuesday July 4, 2017: Abby and Dario are married, Brady learns what happened between Eric and Nicole, and Tripp begins to have second thoughts about his plan. 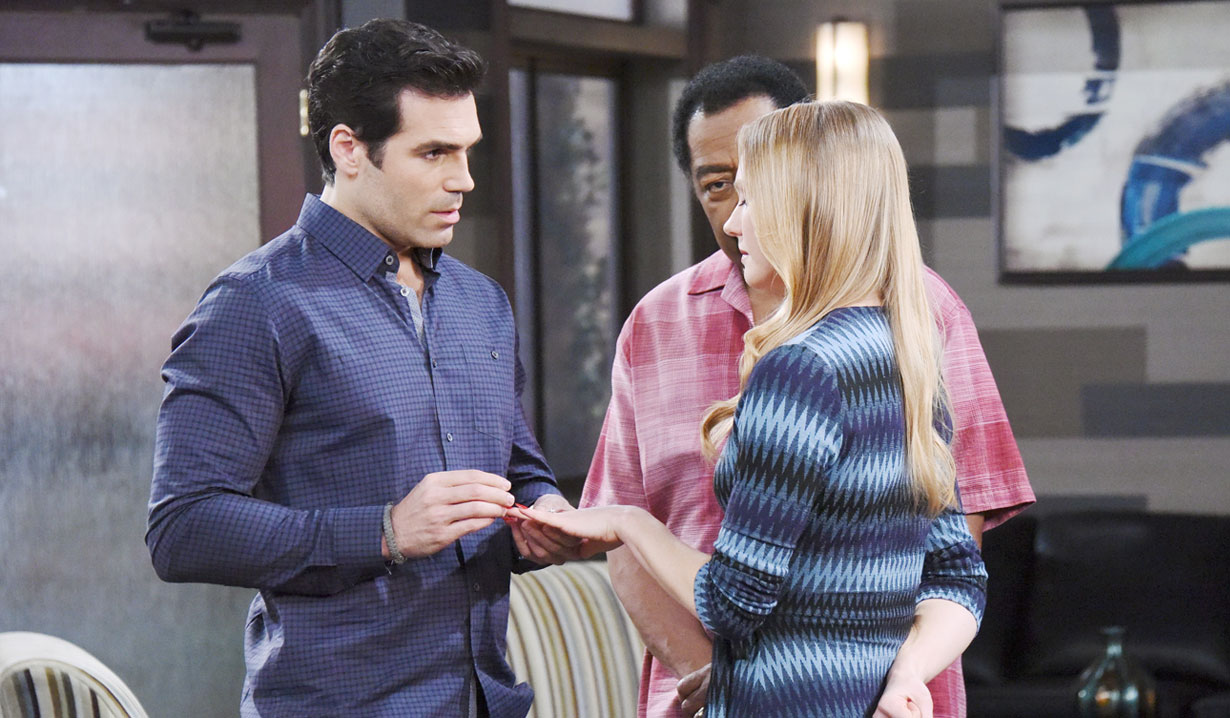 At the hospital, Tripp swears he is only going to change one more of Kayla’s records, and he has to be careful not to let a mistake like with Hope happen again. He looks through the charts, and Kayla catches him and asks if everything is okay. He claims he was just thinking about Mr. Morales. She tells him his empathy will make him an excellent doctor. She invites him to the pub to join the Brady’s annual picnic, so they leave.

More: The top 10 ways soap operas have celebrated the Fourth of July

Eric drops by the Brady Pub, where Roman is planning the family’s celebration for the Fourth of July. He opens up to his dad about his mistake with Nicole at the party, and how she doesn’t want to talk about it and wants to put it behind them. Meanwhile, Kayla and Tripp arrive outside where Steve is grilling in his “kiss the cook” apron. Steve and Kay kiss and flirt. Later, Joey and Tripp chat as they decorate the pub. Tripp brings up Ava, which sends Joey into a rant over bad memories. Tripp asks about his memories of his mother, so Joey explains how Ava used him to get to his parents, and claims they are lucky to be alive. Tripp feels that every time his mom comes up it seems people aren’t telling him the whole story. Joey suggests he let it go and move on. Meanwhile, Steve chats with Roman about running the pub while his mom is in LA, and suggests if it is boring him that he could do some part-time work at Black Patch. Roman says he’ll think it over. The Bradys all gather to eat, and Tripp excuses himself when he gets a call from Jade. He admits he’s having second thoughts about what he’s doing to Kayla because she doesn’t seem like a killer, and he doesn’t want to lose this family he’s found. Later, Kayla gets a call from the hospital that something is wrong and she needs to head back. Brady and Nicole take a walk in Horton Square with Tate, where they run into Eric. Nicole decides to get Tate a snack, and Eric and Brady discuss what happened at the party. Eric assures Brady it wasn’t a big deal. Brady is puzzled and asks what happened and what wasn’t a big deal. Nicole returns and Brady confronts them both in regards to what they remember about the party. Nicole admits to stumbling into Eric’s room while woozy from the Halo, and then waking up with him in bed. They swear they were fully clothed and nothing happened. Brady understands it was the drugs, and he trusts them. Brady and Nicole take off to get Tate home. Chad and Gabi walk into Club TBD as Abe is marrying Abby and Dario. They are both flabbergasted that they weren’t invited, and that nobody from Abby’s family is even present. Dario and Abby claim this was a quick decision. Chad believes Abby is being manipulated by Dario, but Gabi is happy for them if this is what they want. Gabi suggests to Chad that they go, but he refuses. He insists he watch them actually go through with this. Abby invites him to stay if it will prove their marriage is real, and asks Gabi to take some photos of the ceremony so they can remember this day. Abe leads Abby and Dario through the vows and Abby stammers through them uncomfortably before Abe pronounces them husband and wife. After the ceremony, Chad and Dario bicker about Thomas and Dario’s role in his life. Abby asks Chad why he bothered to come here. Chad had something to tell her, but just wishes her luck and walks out. Gabi congratulates her brother and Abby, and they hug. Abby excuses herself to go break the news to her mom, and Gabi confronts Dario about what is really going on. Dario swears he loves Abigail, and hopes soon they can have a real wedding with guests and everything. Gabi tells him to enjoy his wedding day, and she’ll try and calm Chad down. Later, Abby and Dario share a dance, and he makes a toast and thanks her for the sacrifice she’s made for him. He promises to be a good husband and father.

Brady and Nicole return to the mansion, and Nicole tells him how sorry she is about what happened with Eric. He knows she didn’t do anything wrong. She swears she’d never do anything to mess up her life with him and Tate.

Gabi finds Chad at the DiMera mansion and asks if he needs to talk. He doesn’t because Abby is his past now and she’s is his future. He suggests they gather the kids and go celebrate with fireworks. They kiss.

Rafe has a big surprise for Hope.