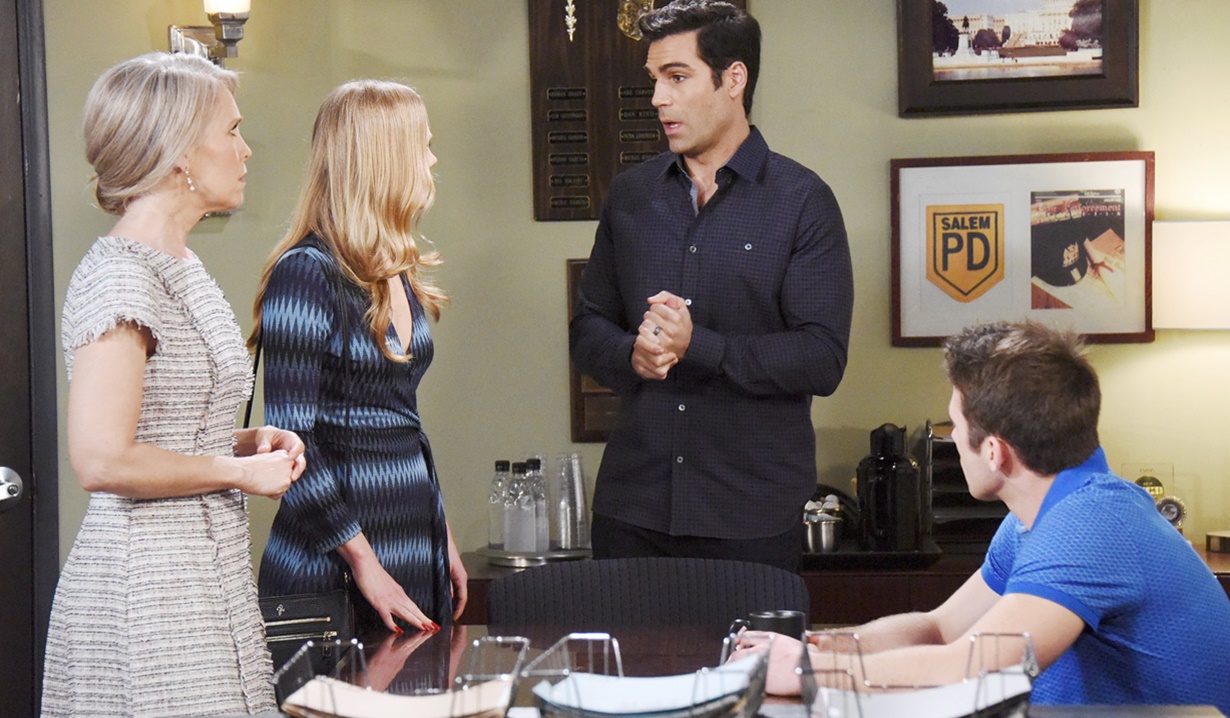 At the Kiriakis mansion, Justin expresses pride as Sonny conducts Titan business by phone. Sonny feels he’ll achieve everything he’s planned now that Deimos is out of the way. Talk turns to JJ’s predicament. Suddenly Sonny flashes to Deimos holding him by the throat. Once alone, Sonny whispers to himself. “Is it possible? No, I’d remember if I had…” Paul appears, and is relieved that Sonny’s back to being reasonable. They embrace. Sonny confides that he remembers arguing with Deimos, who ripped the amulet from his neck. Paul urges Sonny to keep this between them.

At the Brady’s pub, Gabi tells Rafe she’s upset about JJ’s arrest. Rafe tries to reassure her. Gabi agonizes that JJ’s not the type to take a life. Rafe thinks she still has feelings for the guy. She confides they danced at the Martin house and she felt as though she still loved him, but insists she’s building a future with Chad. Rafe reveals that he proposed to Hope, who wanted closure with Deimos. Now that he’s dead, Rafe wants Gabi’s help proposing again. They enthuse about finding the perfect ring.

More: Spoilers for Days and all four soaps

At the station, JJ is puzzled as to why he can’t remember killing Deimos. Jennifer and Abigail believe he’s innocent, but JJ thinks it’s possible he did it. Dario interrupts, and pulls Abby aside to ask her to come with him – it’s a matter of his survival. Meanwhile, Jenn tells JJ she’s like him; he’ll do whatever it takes to keep his loved ones safe. He wonders if she’s talking about him or Abigail. Jenn leaves JJ to make a call and encounters Hope, who snuck out of the hospital. Chad arrives at the station and Jennifer updates him on JJ’s situation. Chad wonders what he can do. Grimacing, Jenn asks him to talk Abigail out of marrying Dario. Chad argues that she’s an adult, but Jenn frets about Abigail leaving with Dario. Chad heads out. After, Justin arrives and he and Hope assure JJ there’s no case against him. JJ worries if he didn’t kill Deimos, someone else did. Later, Hope returns with bad news – there’s new evidence against JJ – his DNA was found under Deimos’ fingernails. She hopes the judge will take into account the extenuating circumstances. Hope doesn’t want to do it, but she has to charge him with murder. She chokes out his MIRANDA rights, and JJ tearfully nods his understanding.

More: Latest news for Days and all four soaps

In the square, Chad and Sonny run into one another and argue about whether the amulet is responsible for what happened at the Martin house. Sonny shrugs that Deimos fell to the curse as he was the last one to touch it. Chad counters that JJ’s life is on the line. As they talk, Chad reveals he’s glad Deimos is gone, along with the amulet. They muse about how much control they actually have over their lives. Rafe and Gabi appear. Sonny reschedules his playdate with Arianna, and then leaves. Chad tells Gabi he’s heading to find Abigail…to discuss Thomas’ schedule. They agree to meet later. After shopping, Rafe opens a ring box and grins at the huge rock.

More: June Comings and Goings for DOOL and all four soaps

At the nightclub, Dario advises Abby that immigration is due to check on him in the next day or two. He confirms he’ll be killed if he’s deported, and wants to get married. Abby can’t get married when her brother’s in trouble. Dario questions her denying herself joy. Startled, she reminds him this isn’t real. Dario presses for her decision, sensing cold feet. Abigail makes excuses. Dario learns the courthouse is booked, but spots Abe, and asks him to pronounce them husband and wife as Abigail gapes. Abe takes Abby aside to look him in the eye and confirm this is really what she wants. Abby does it, but Abe won’t perform the ceremony without calling Jennifer. After, with Jenn’s grudging blessing, Abe agrees to begin. To Abigail’s surprise, Dario launches into personal vows, gushing at length about how beautiful and selfless she is. When it’s Abigail’s turn, she reflects how Dario was there for her when no one else was. She is repeating after Abe, “I Abigail, take you Dario…” when Chad appears in the doorway. Abigail stops talking and Dario looks from her to Chad and back again with concern. Back at the DiMera mansion, Sonny is shocked when he suddenly flashes to seeing himself crouching over Deimos’ dead body, laying on the floor with a knife sticking out of the torso. He reels from the memory and hyperventilates. “Oh my God!”

Nicole is caught in a lie.