Friday June 30, 2017: Chad and Abby discuss what happened at the Martin House, the fallout from Halo 2.0 continues, and Lani feels guilty. 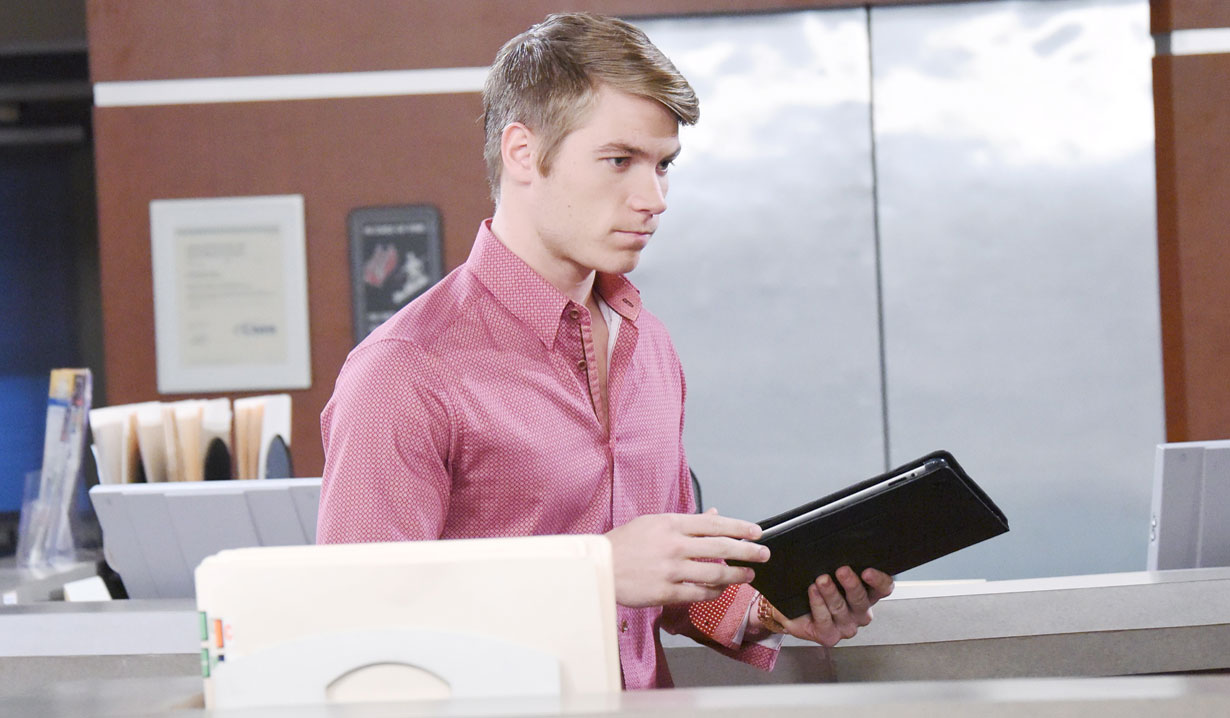 Chad calls Gabi from the square to say goodnight. After briefly talking about Deimos’ murder and JJ being questioned, Chad believes anyone could’ve killed Deimos. He hangs up, recalls kissing Abby at the Martin House and looks at photos of him, Abby and Thomas on his cell.

At the Brady’s pub, Tripp, Steve and Joey talk about video games before Steve gets a call that Hope’s been hospitalized.

Hope convulses in a room at University Hospital, as Rafe relays to Kayla how she ended up ingesting Halo 2.0. Kayla also learns about Deimos’ murder and JJ’s involvement. As Hope’s seizing continues, Kayla asks Rafe to wait outside, where he runs into Steve and Tripp by the hub. Rafe fills Steve in, as Tripp watches Kayla tend to Hope. Kayla makes eye contact with Tripp, who whispers, “This couldn’t be more perfect.” Later, Kayla appears by the hub and tells Steve, Tripp and Rafe that Hope’s stabilized. She has her on a very low dosage of a drug that can help her. Hope’s going to be fine. Kayla takes a break with Steve, while Rafe goes to see Hope. Once alone, Tripp takes Hope’s chart and digitally ups the dosage on the meds to counter the Halo, which can be very dangerous. Tripp looks in on Rafe with Hope, promises to return before the nurse administers the drug, then leaves. Inside Hope’s room, Rafe talks to a sleeping Hope. He remembers asking her to marry him and swears it wasn’t the drugs talking. “Nothing would make me happier than to spend the rest of my life with you.” Rafe kisses Hope’s forehead. In her office, Steve treats Kayla to a massage and is touched to see a photo of Kayla and Tripp. Kayla believes Tripp could really have a career in medicine. Steve knows anything’s possible with a mentor like Kayla.

More: Occurrences that only happen on soaps

Tripp returns to the pub and updates Joey on Hope, who listens as Tripp praises Kayla’s ability as a doctor. Joey agrees with Tripp, Kayla’s a great role model. Joey talks about his childhood and how Kayla was there for everything. “She’s always putting other people first,” Joey says. “She’s an amazing person.” Joey apologizes, due to Tripp not having his real mom around. Tripp brushes it off but comments on never having the chance to see what kind of mom Ava could’ve been. He sees the time and has to rush off.

Back at the hospital, Rafe notices Hope’s distress and asks a nurse about giving her a sedative. The nurse heads to Hope’s room. Shortly after, Tripp appears and sees the nurse about to give Hope the medication. He stops her and says Kayla agreed to show him how to administer the meds. He takes the chart and remarks on the high dosage, just as Kayla and Steve reappear. Kayla’s confused but thanks Tripp for noticing the error. The high dosage could’ve killed Hope. Later, alone with Rafe, Hope comes to and learns Deimos is gone. Rafe calms her and climbs in beside her at Hope’s insistence. Back in Kayla’s office, Tripp and Steve watch as Kayla beats herself up for making such a major mistake with Hope’s meds. She thanks Tripp again, profusely.

Eli reassures Lani at Salem PD, as guilt washes over her for implicating JJ. Abby appears and rants at Lani for pinpointing JJ then quickly apologizes. When Abby gets a call from Chad, she agrees to meet him later to discuss what happened between them. Inside the interrogation room, Raines informs JJ the blood on his sleeve is being tested. If JJ killed Deimos, he won’t try to deny it but adds in frustration, “I don’t remember!” Raines has an idea on how to jog JJ’s memory and goes off. Lani and Abby go in to see JJ, where they’re soon joined by Raines and Marlena. After everyone leaves the room, Marlena hypnotizes JJ and asks him to think back to the last time he remembers being at the Martin House – and seeing Deimos. JJ recalls being upset and later attacking Deimos. Marlena urges JJ to focus but has to bring him out of the trance when he starts to breathe heavily through his nose. Raines reappears and JJ urges Marlena to reveal her findings. Marlena relays that JJ doesn’t remember killing Deimos, only that he attacked him. When Raines walks Marlena out, Lani appears and JJ says, “You’re right. I attacked Deimos.” He believes it’s a safe bet that he killed him too. square, Chad and Abby recall kissing while under the influence of Halo 2.0. They talk around the situation, comment on how they’re both with other people then Abby admits she’ll always care about him.

Abby returns to the station in time to hear Raines advise JJ to get an attorney. The blood on his sleeve matched Deimos’.

Days recap: The Martin House is a...