Days recap: The Martin House is a crime scene with everyone a suspect

Thursday June 29, 2017: Party-goers try to figure out what happened the evening prior, and things get sticky when they find a body and the police arrive... 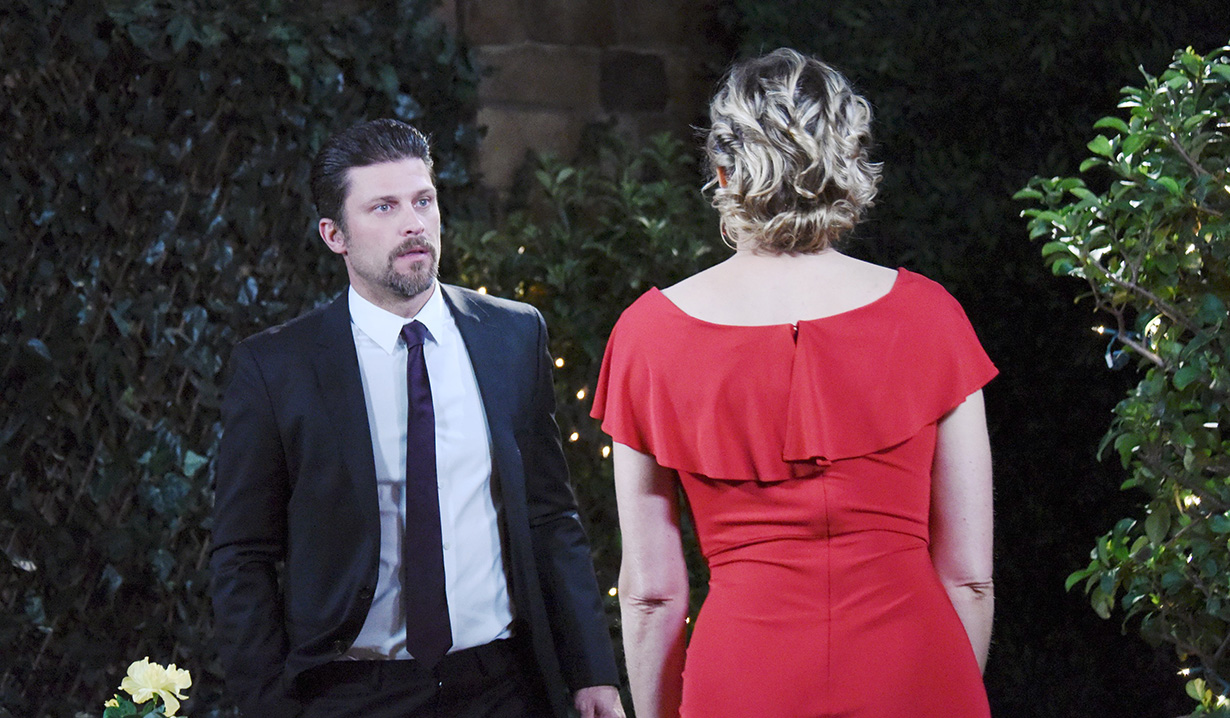 At the Martin House, everyone is asleep. In the living room, Gabi lies on a sofa with JJ, Eli and Lani snuggle on another one. Upstairs, Nicole wakes up aghast that she’s fallen asleep on Eric’s chest. Meanwhile, Chad awakens in Abigail’s room on a chair, confused. He has a smudge of lipstick on his collar. Since he can’t wake Abigail up, he leaves and finds Sonny on the floor outside. He wakes his friend up. Neither remembers anything that happened after they toasted with the champagne. They head downstairs as Abigail wakes up and notes that Dario’s rings are on her finger. Rafe and Hope sleep in the garden outside. They wake up and head in as Chad and Sonny appear in the living room. Rafe wakes Gabi up and she’s startled to be sleeping on JJ. Everyone stands around and gapes at each other, bewildered. Gabi apologizes to Chad but she can’t explain what happened. He tells her he woke up in Abby’s room but nothing happened. Rafe wakes Lani and Eli up and collapses into a chair. Paul stumbles in holding a hand to his head. He  tells them, “Deimos was here and the one behind this.” He explains that the waiter was Deimos in disguise. When he went to investigate, someone knocked him out from behind. Lani is positive Deimos used Halo to drug them. Gabi doesn’t get why but Lani points out if you ingest enough, it could be fatal. Paul blames the amulet but Sonny realizes that though he had it around his neck, it’s gone. He tells a shocked Chad and Gabi he recovered it on the island after they buried it. Abby, Eric and Nicole appear. Everything is explained from the cursed amulet to all of this being Deimos’ fault. Gabi questions why Abby’s lipstick is on Chad’s collar. Chad flashes to kissing Abby but gets flustered. JJ recalls dancing with Gabi. She starts to remember and needs air. She opens curtains and finds Deimos’ dead body propped up on a chair. She screams as he falls on her. The guys grab the body and Hope calls the cops, barely able to talk. Raines arrives with the paramedics and tells everyone they’re suspects. They can’t leave the property. Deimos’ body is wheeled away and everyone glances from one person to the other. Upstairs, Abigail calls Jenn and asks her to take Thomas for a little longer. Chad wanders in and Abigail flashes to last night. Gabi finds them together. She asks what’s going on. They tell her, and she questions what they were doing last night. Abby says whatever it was, it only happened because of the drugs. Nothing has changed. Gabi’s glad Deimos is dead. Though they all agree, Chad thinks they should keep those thoughts away from cop ears. Out in the garden, JJ, Lani and Eli discuss what they recall. Lani admits she kissed Eli. It’s awkward but Eli reminds them that they were drugged – no matter what, they did things they wouldn’t normally do. JJ’s pissed. Lani says the kiss meant nothing, but JJ hates that Eli says it’s also something he’d never forget. Back in Eric’s room, Nicole calls Brady to tell him about the stabbing. Brady asks her to let Eric ‘take care of her’ but she’s a grown-assed woman and claims she can do it herself. They disconnect. Nic asks where Eric went the night before when she came out of the bathroom. He’s not sure and flashes to returning and telling Nicole he thinks he did something ‘bad’. Back downstairs, Raines interrogates Rafe and Hope and knows this isn’t the first time they’ve taken the law into their hands. Hope’s their prime suspect.

More: Which soaps are on the Fourth of July…

Later, in the living room at the Martin House, Hope starts to sweat and looks sickly. She wonders to Rafe if she did stab Deimos. He takes her outside and she gets worse. She starts seizing. Paul and Sonny argue back upstairs in the hall when Sonny says he wants to go home, and wonders if he’s the killer. With Paul prompting him, he recalls Deimos threatening him but lies to Paul. “I don’t remember seeing Deimos at all.” Downstairs, Raines notes JJ has blood on his shirt sleeve. Lani recalls JJ struggling with Deimos and gasps. Raines can tell she remembered something. JJ says it’s fine to tell them. Eric and Nicole appear and Lani says she thinks she saw JJ attack Deimos. JJ can’t recall. Raines takes him down to the station.