Days Recap: Death comes to Salem as folks are drugged on Halo

Wednesday June 28, 2017:  Party-goers are high on Halo 2.0 and have no idea whether up is down or down is up...meanwhile, Deimos watches his handiwork until someone shuts him down, permanently. 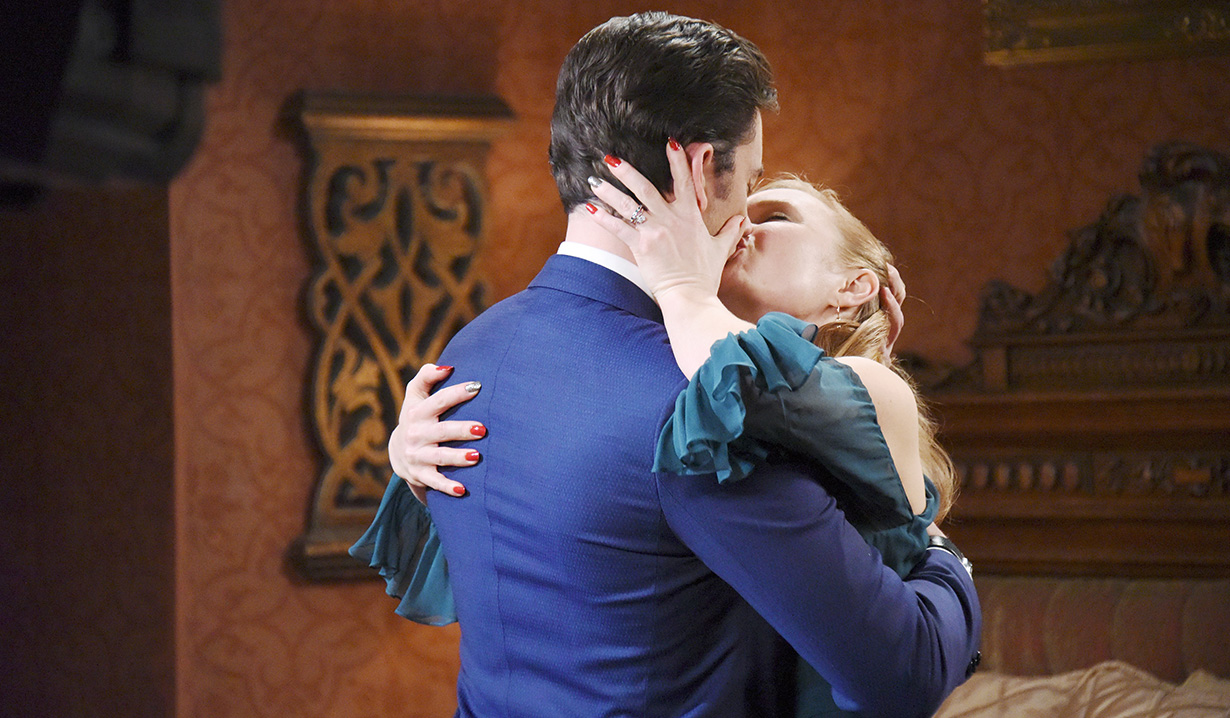 At the Martin House party, a barely disguised Deimos flashes to drugging the champagne with Halo 2.0. Nobody appears to notice him. He grins as JJ worries for Lani, who feels “out of it.” JJ admits he isn’t feeling well either. He stumbles. Lani remembers feeling this way when on Halo. Nearby, Sonny and Gabi can’t find Chad or Paul. Eli overhears Gabi grousing to Sonny about the lack of food at the party and offended, says he’ll see what’s going on. He goes to the waiter – Deimos, and Gabi follows, asking for a drink. Eli thinks she needs air – not a drink. Gabi’s phone rings. Her ringtone is dogs, barking. Nearby, JJ and Lani hear a dog barking. They climb all over each other in fear. Up in Abigail’s room, Abby and Chad are both high as kites and try to discuss how to get along for the sake of their kid. Abigail thinks they’re renewing their vows. Meanwhile, in her room, Nicole and Eric feel the effect of Halo and wonder what’s happening to them.

More: How to know your life is a soap opera Hope and Rafe meander through the square feeling strangely and laughing over Hope’s grammar. Hope sits on the ground and Rafe follows suit Hope holds her shoes up to her face. “Do I look okay?” Rafe laughs. They babble on incoherently and lie on the ground and kiss as people watch. They get up and Rafe declares this the best moment ever. He gets on one knee and proposes. Hope’s perplexed. Rafe doesn’t have a ring so gives her a vase of roses. They profess their love but Hope can’t marry him – yet. Rafe’s sorry he got so carried away. He assumes it’s because of Bo. Part of her will always love Bo but she does love Rafe. They kiss. Hope says she can’t marry Rafe until Deimos pays for what he did to everyone, including Bo.

Back at the party, JJ holds Lani and Gabi suddenly takes notice. She asks why JJ’s all over the woman he cheated on her with. Back upstairs, Chad says they’re not renewing their vows. “You left me,” he says, confounded. Abigail apologizes, knowing she can’t be happy with anyone but Chad. Neither wants to be without the other. They recite loving vows for a new beginning. In Nic’s room, Eric thinks they’re drinking cider. He feels remorse for killing Daniel and then suddenly they see Dr. Dan’s ghost who appears to be stuck in limbo. Eric rehashes the drunk driving accident. Dan asks him to have a productive life and let go of the past. Daniel urges Nicole to forgive him so Eric can go on. But only if he forgives himself. Nic sobs. She wishes he was there to see their kid. Daniel shushes her and tells her it’s time to move the hell on. Nic sobs she’ll try. For him. She kisses the ghost. The ghost kisses her back and when she opens her eyes, she’s kissing Eric. Downstairs, Sonny hears Gabi at JJ’s throat and demands they “kiss up and make it.”

They laugh and Gabi slurs her words. JJ kisses her cheek and their hug turns amorous. Eli and Lani’s eyes widen. Sonny wanders off and Deimos follows as Lani yells at JJ for kissing his ex. Sonny arrives at his room and passes out until Deimos wakes him up. Sonny’s confused and demands to know who he is. He rips off his beard by accident and realizes it’s Deimos. They argue. Deimos steals the amulet and taunts him about being unable to find Paul. Deimos takes off. Back downstairs, JJ and Gabi’s old song plays. They dance, while back upstairs in Abby’s room, she and Chad share a kiss which is interrupted when they hear tapping. Chad rushes outside and sees Deimos running down the hall. He tells Abby and they race after him. Eli follows Lani to the park outside. She tells him she thinks JJ still loves Gabi and she still loves him. Eli defends her, calling her way outside of JJ’s league. She hugs him, smiling and they make out. They hear a scream and run.

Back at the Martin House party, it was Gabi who screamed. She tells JJ and Lani she saw Deimos. JJ vows to kill the guy and they all run off. One hour later, Deimos is found with a steak knife in his chest, dead.

Days recap: The Martin House is a...