Tuesday June 27, 2017: Salem residents gather for a celebration, Chad and Abby receive news regarding their marriage, and Paul uncovers the truth surrounding Sonny and the cursed amulet. 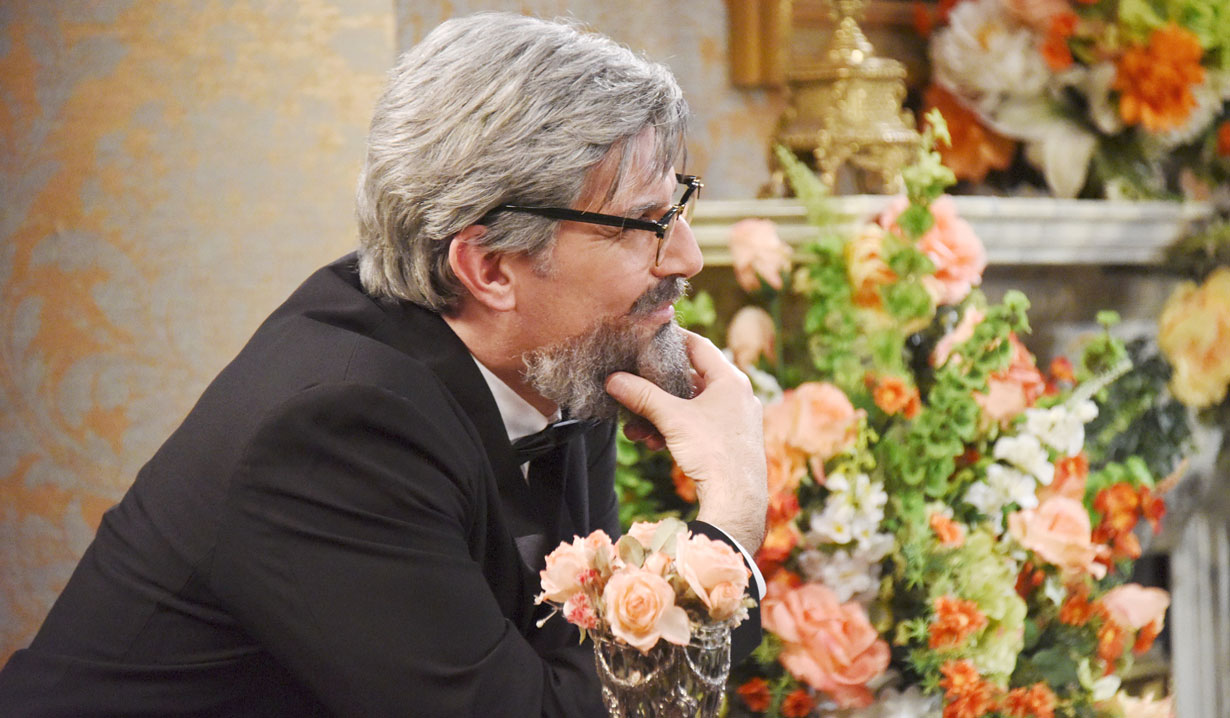 Nicole appears at the Horton Center with gift bags for the Martin House party. Eric admires Nicole’s strength but she only wants to prove to the judge that she’s changed. Over talk of Brady not being able to attend the party, Nicole worries that Deimos is still running around. If Nicole gets her hands on him, she doesn’t know what she’d do. Eric thinks back to warning Deimos away from Nicole then begs Nicole not to drive to the party alone. She refuses to live in fear and leaves.

Hope, Rafe, Lani and JJ discuss Deimos being the Candyman at Salem PD. Rafe and Hope reveal there’s a stronger version of Halo out there. They have enough to put Deimos away for a long time. After Hope and Rafe leave, Lani recalls how coming off of Halo felt. She would do anything to give Deimos a taste of his own medicine. Lani leaves and JJ glares at Deimos on a wanted poster.

Sonny finishes a business call at the Kiriakis mansion. Once he’s done, Paul expresses his love. As Paul fixes Sonny’s tie, he notices the amulet around his neck and snaps, “Tell me this isn’t what it looks like.” Sonny admits Chad buried it on the island but he plans to make a fortune off of it. Sonny insists they go to the party – nothing is going to happen tonight.

Gabi finds Chad distracted at the DiMera mansion. He relays his divorce is official. She sees it as a new beginning and kisses Chad. Gabi wants to skip the party, but Chad reminds her it’s in their honor. She wonders if going is for his own sake or does he have something to prove to Abby? Chad reassures Gabi before they take off.

At the docks, Deimos’ goon hands him a waiter’s uniform and comments on his new look. Disguised with gray hair, matching beard and black glasses, Deimos anticipates getting a hold of the amulet then takes out a vial. Halo 2.0… Salem residents won’t know what hit them. Deimos dresses and leaves for the party.

Abby receives a call in her room at the Martin House. Her divorce is final. She sadly looks at a photo of her, Chad and Thomas then answers the door to Dario. “I got the rings,” he says and learns about Abby’s divorce. Dario knows this is killing Abby and insists their upcoming marriage means more than a green card. He hopes one day to help her forget about Chad and shows Abby their wedding rings. Though Dario suggests they blow off the party, he follows Abby out the door. Downstairs, Eli joins Julie and Doug as guests begin to arrive. Sonny, Paul and Eli learn from Lani and JJ that Deimos is still on the run. Nearby, Hope talks to Eric. Jenn’s home with Thomas, who has a fever. Chad and Gabi arrive and run into Abby and Dario. The divorce is brought up, as tension washes over them. Julie calls everyone’s attention and announces Eli’s plans to turn the place into a residence for young people. “It’s a night to honor the Horton Center,” Julie expresses, as Deimos appears at the bar in disguise and drugs the champagne with Halo 2.0. Doug feels as though he’s coming down with a virus and tells Hope that Julie is taking him home. Elsewhere, Sonny, Paul and Chad agree, none of them can breathe easy as long as Deimos is alive. Sonny warns Hope and Rafe that Kiriakis security is taking over the search for Deimos. He’ll do whatever it takes to keep his family safe. JJ joins Gabi, wanting to make sure she’s happy. Gabi is and still cares about JJ, as well as Abby and thinks the whole situation is sad. Outside, Nicole gives Eric a pep talk before his speech then follows him inside. Dario appears on the phone from the shadows, upset with his caller. When he runs into Hope and Rafe, he claims to have a business emergency and leaves. Inside, Deimos hands a waiter a tray full of beverages, orders him to push the champagne before the cider then watches as the partygoers take their glasses. Eric makes a speech to everyone who made it back from the island and to the Horton Center then lifts his glass. As everyone goes to take a sip, Hope calls out, “Wait!” and reminds Eric he can’t drink that. She has a waiter get Eric cider instead of champagne then everyone cheers – and drinks, even the waiter. Later, outside, Deimos knocks Paul out and drags him away. Back inside, a little tipsy, Abby and Gabi get catty over Chad, who rushes after Abby. In another room, Eric tends to Nicole, who feels strange but not sick. Up in her room, Abby stumbles as everything around her spins. Chad appears and catches Abby before she falls. She doesn’t feel like herself and giggles, as Chad smiles at her. Back downstairs, Hope and Rafe can’t take their hands off each other, grab more champagne and leave. Eli, JJ, Lani, Gabi and Sonny feel wasted. “Has anyone seen Paul?” Sonny asks. Deimos smirks nearby.

The Martin House partygoers are overcome by the effects of Halo 2.0.