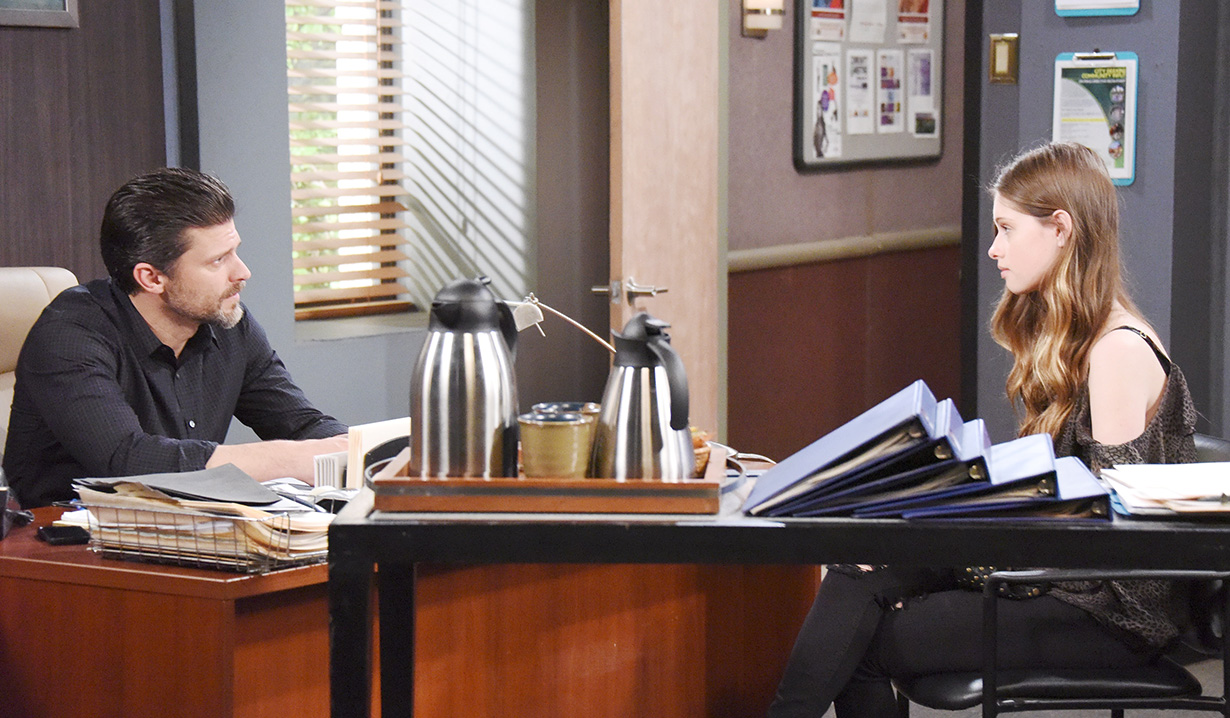 In the square, Theo tells his father Claire kept the love letter Ciara wrote from him and now he’s not sure if he loves her.

Jade appears at the loft, wanting to apologize to Claire but Claire won’t hear of it and gives her a boot to the arse out the door.

Tripp drops by University Hospital to tell Kayla he’s considering doing the MCATS. Kayla’s happy to hear but has to run when a patient’s monitor goes off. She returns a few minutes later and says her patient died. She needs air and asks Tripp to join her but he can’t. When she’s gone, he makes changes on the file so it appears as though Kay made a mistake. Eric finds Nicole upset at the Horton Center, and assumes it’s about him. She exclaims, “It’s not about you, you jerk. I just lost Holly.” Eric’s sorry. She tells him the whole story and he tries to cheer her. It backfires and she rudely snipes that she wants to keep all discussion work-related. Upon noticing how sad he looks, she backtracks and tries to explain. They get to work and Eric taps his pen on his desk. Nicole is annoyed. Eric stops but notes that it never bothered her when they worked together at the rectory. He takes a call and learns that Julie is allowing them to use tonight’s welcome home bash for the castaways to launch a campaign to keep the Horton Center around longer. Nicole likes that idea, and goes to make calls to help.

More: Deconstructing DOOL: Will the Nicole and Brady Show ever end?

At TBD, Adrienne tells Jennifer that Sebastian Howard is really Anjelica Deveraux. Jenn’s shocked. Adrienne says the woman is sick and twisted and determined to steal their dream. Jenn hopes Steve finds some dirt on her so they can find a way to keep The Spectator. Anjelica strolls in and sits with the women. They’re not welcoming and ask her to be civilized and leave the past in the past. Anjelica scoffs at them and says she’s calling in her loan. Immediately. Jenn gasps. Has she thought of what Jack would do if he were here? Anjelica thinks Jack would understand. “This is business, ladies. Not personal.” The others don’t agree on that but they do agree that Anj is going down in flames! Anjelica thinks they’re running the newspaper into the ground. Adrienne defends Jenn and when Anjelica attacks Adrienne, Jenn defends her, commenting that she doesn’t know what happened to Adrienne this year. Anjelica does though, and accuses Adrienne of stringing two good men along for her own pity party when she had breast cancer. Adrienne raises a hand to Anjelica but Anjelica catches it and the two struggle. Jenn comes between them and Anjelica gives them 3 weeks before she takes over.

Jade finds Joey at the pub working. She rants about Claire’s refusal to accept her apology about making the sex tape and in walks Kayla. She overheard everything and is appalled. She yells about the damage that could have been done. Jade reminds Kay that Joey did worse. Joe takes his mom aside and Kay worries that Jade doesn’t know the difference between right or wrong. Joe asks his mom to let him handle this, knowing that Jade never does anything mean intentionally. Kay agrees to it, though she’s not thrilled. She goes. Jade crows that his mom is trying to turn him against her. Joe reminds her what she did was wrong. Jade doesn’t see it, so he asks her to talk to a professional. She agrees – for him, then goes.

Jade appears at the Horton Center, hoping to find a counsellor. Eric greets her and offers to listen. She tells him she’s his cousin Joey’s ex and that she wants help to be a better person. She tells him about making the sex tape and doesn’t understand why everyone reacted so poorly. Eric says she violated their privacy. She didn’t realize since this happens all the time on television. Eric attempts to get her to put herself in their shoes but she still doesn’t understand. Nic returns and eavesdrops as Eric tells Jade to focus on herself instead of making Joey love her. Jade asks how. He tells her to set goals in order to feel better, and stronger about herself. Jade’s thankful. She goes and Nic returns to tell Eric that she’s done everything for the party and is heading out.

Kayla finds Tripp at the hospital. She asks if they can discuss the MCATs later. Nearby, Theo finds Claire on a break from work and breaks up with her. She becomes emotional and walks off. Theo goes and Kayla appears for a chat.

Jade and Tripp meet at the pub. She bellyaches about Joey and he tells her his plan is in motion and soon, Kayla will get what she deserves.

Partygoers are under the effects of Halo 2.0.