Friday June 23, 2017: Nicole feels punched in the guts when she gets big news, Paul is released from the hospital, and John has to go back to work for the ISA. 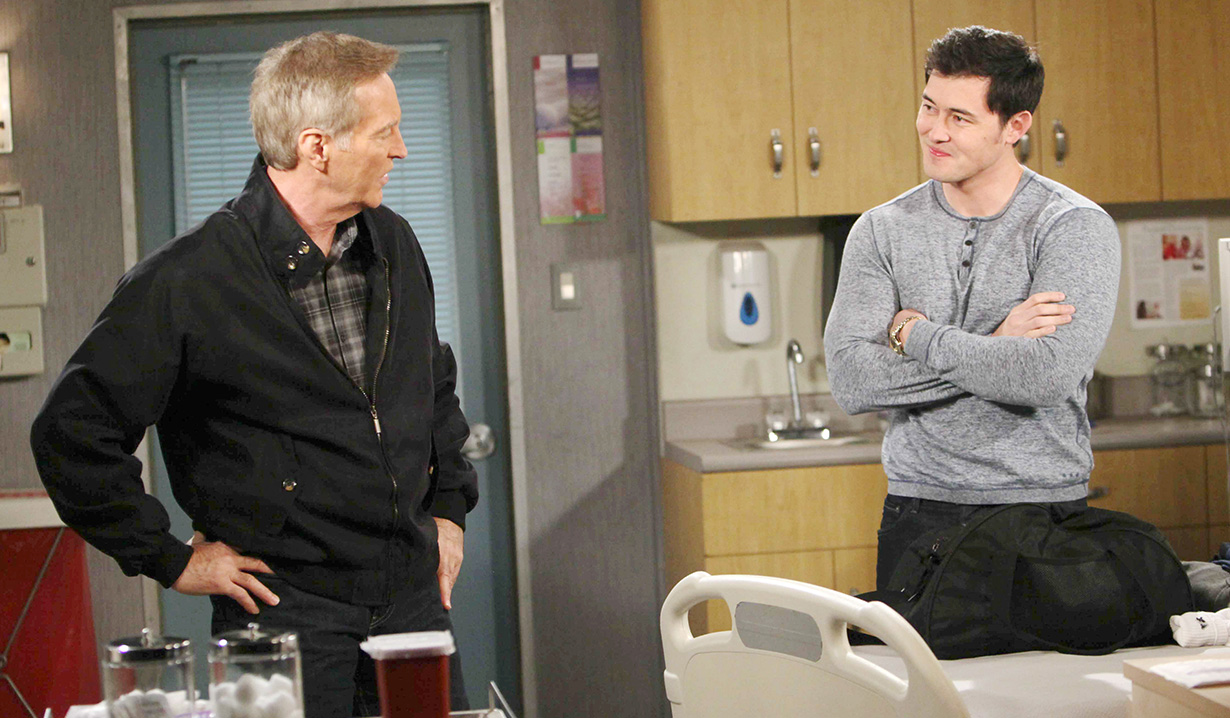 At the pub, Eric tells his mother that things at work have become complicated because Nicole Walker’s starting community service at the Horton Center with him. Doc knows that Eric will get through it. They discuss doing a fundraising event for the Horton Center because it may shut down. They decide to use the party tonight for the castaways for a kick off for the campaign. Julie would be glad to help. She’s on the committee.

At the Kiriakis mansion, Nicole, Brady and Holly snuggle in bed and moon over the kid. Nicole has never been so happy as she is now. Brady kisses her. She’s relieved the nightmare that was her life is over. In the living room, Sonny and Justin argue about Sonny firing everyone Deimos hired. Sonny stands by his decision, wanting to ensure any loyal to his uncle are gone.

In her hotel room, Chloe looks over the custody agreement for Holly and flashes to giving the child to Nic. Nancy calls and asks if she’s going through with making things official with the court. Chloe replies in the positive and then gets another call which surprises her. She calls Nicole and lets her know there’s a complication with the custody agreement and they need to meet with the judge.

John walks into Paul’s hospital room and learns his son is being released. The Silver Fox hugs his son, grateful he’s healthy. Paul still can’t get over what he and Marlena went through to save him. Paul tries to make plans to see the Cubs with his dad but unfortunately, the ISA needs him back on assignment. Paul questions where he’s headed but John laughs and says he can’t reveal that. Paul agrees to check on Doc while he’s away. They discuss Sonny’s new role at Titan and how it’s affecting Paul negatively. John thinks those around Sonny will help pull him through this.

In the alley, Deimos meets his goon who gives Deimos a burner phone so the cops can’t trace his location. Deimos is still after the amulet and claims to know how to get it, even if he has to pry it out of Sonny’s cold, dead hands. He’ll sell the amulet and use the 20 million as seed money to grow his Halo empire. Goon gives Deimos a sample of Halo 2.0. Deimos says the new formula was hidden in the box that the amulet came in.

Justin takes Nicole, Brady, Chloe and Holly to Judge Thorpe’s (played by Ken Lerner) chambers. The judge tells them that as Chloe relinquishes her rights, he has no intentions of giving the kid to Nicole because she’s unfit what with all she has done in her past and the kidnapping. Justin’s pissed. He argues and Brady and Nicole beg. Chloe apologizes. Thorpe says Holly’s going into foster care. He refuses to return her to Chloe because she stole her from Nicole. Nicole babbles about this being her only kid and that her father was the greatest man that there ever was, the greatest man that there ever will be. Thorpe couldn’t care less. It doesn’t distract from the facts. Though he feels Nic’s an unfit mother, he’ll revisit this in 2 months. If she makes any missteps, the situation will become permanent. At Justin’s request, the judge agrees to only let Maggie see the kid. Nic and Brady say goodbye and the social worker, Ms. Rashid, takes the kid away as Nic sobs. Chloe blames herself but Nicole doesn’t blame her.

Paul arrives at the Martin House where Sonny’s glad to see him. He’s had a stressful day, firing loads of people. Paul knows he’ll be facing a lot more tough decisions and thinks he’ll do what feels right for the company. They rehash their stint on “Gilligan’s Island” and profess their love for one another. With a glint in his eye, Sonny suggests they head upstairs…for sex.

John and Marlena dine at the pub. They talk about his return to work. He gives her an airplane charm for her bracelet to symbolize that he’ll always fly back into her arms. She cries a little, making it hard on him. They hug it out. He tears up and asks her to accompany him on one more stop before he goes.

John and Marlena arrive at the Kiriakis mansion. They tell Brady that Paul was released from the hospital. Brady’s glad. He tells them what happened with the judge today, which saddens them. Brady learns his dad’s going undercover. The men hug, sadly.

Things are uncomfortable when Eric finds Nicole in his office at the Horton Center.

Tripp makes a move with his new plan.