Days Recap: Sonny takes over Titan and is undeterred by the amulet

Thursday June 22, 2017: Victor hands over the reins, Andre and Kate welcome Chad home, and Claire does the right thing. 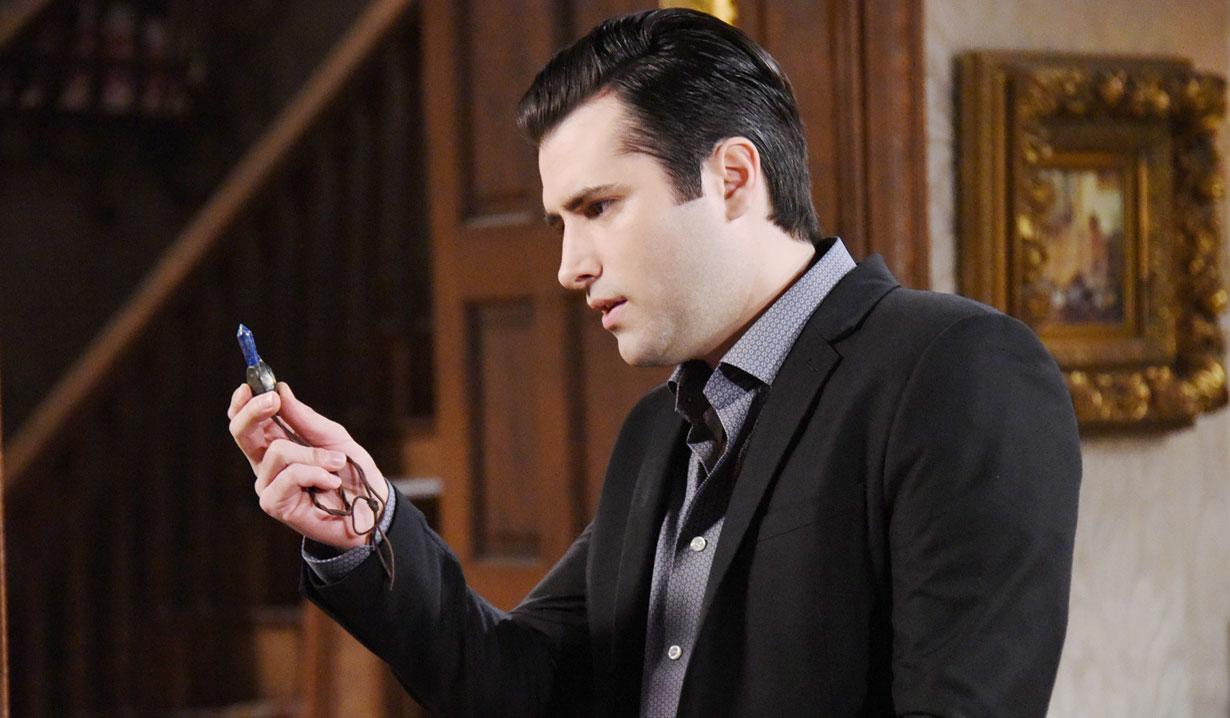 Theo knocks on the bathroom door at the loft, insisting Claire come out. Claire appears but claims there’s nothing to talk about. Marlena arrives, wanting to speak to Claire alone. Once Theo’s gone, Marlena scolds Claire about discussing such personal matters as sex with Jade and hurting Theo. Claire romanticizes sex with Theo, who she claims to love. “Does he love you?” Marlena asks. Claire admits he might be in love with Ciara. Her grandmother thinks she used sex to secure the relationship. Claire denies it.

At Kiriakis mansion, Victor tells Sonny he scared the hell out of him. Sonny makes jokes, leaving Victor to call him a smartass. Talk turns to business. Victor appoints Sonny the new CEO of Titan. “Awesome,” Sonny replies, relieved. “Not so much,” Victor retorts. Sonny’s ready for the challenge but Victor talks about ‘the grey area’ and Sonny’s code of ethics. He admires that in Sonny but warns of the risks, “Once you’re down the rabbit hole, it’s very hard to get out.” Victor’s had to live with the things he’s done. Alone, Sonny stares at the amulet, vowing not to be afraid of it – or anything, for that matter – and to do what’s best for his family.

More: Some of the reasons we love soap operas

Andre and Kate rush into the DiMera mansion, happy to see Chad. After the brothers hug, Kate announces she’s a DiMera again. Stunned, Chad and Gabi listen as they explain needing to marry in order to secure DiMera Enterprises upon Chad’s return. As long as it isn’t a way for Andre to grab power, Chad’s okay with it. Kate promises to return the company to Chad in six months, which stuns Chad right out the door to fix things with the board. Alone, Gabi badgers Kate about being with Andre when she could be with the man she loves. Kate knows she lost that and is prepared to start a new chapter. Later, Chad returns and verifies he has to wait six months to regain control. Though Kate and Andre appear to be on the same page, Chad warns he’ll be keeping his eye out for trouble. Andre and Chad shake hands, vowing to stick together. Kate notices the closeness between Chad and Gabi and is thrilled when Chad confirms they’re together. Andre wishes them well then jokes about his and Kate’s sleeping arrangements. After Andre and Gabi leave the room, Kate hugs Chad and expresses her utter happiness for him. Out in the foyer, Andre puts Gabi on notice and warns, “Watch your step, Senorita.” Gabi loves Chad and challenges Andre to try to intervene before heading off to tend to Arianna. Later, Kate and Gabi catch up in the living room. Though Gabi is taking things slow, Kate would love to have Gabi and Ari there – and if Chad wants that too, that’s all that matters. Elsewhere, Andre’s happy to hear Chad buried the amulet on the island then privately promises Kate that he’ll stay out of Chad and Gabi’s relationship. When Kate walks off, Andre whispers, “This isn’t over yet,” then raises his glass to Stefano’s portrait.

Valerie leaves Eli a message while at the pub, wanting to see that he’s okay with her own eyes. Theo appears and they briefly talk about the sex tape, leading Theo to admit that sex was more complicated than he thought. Over talk of love, Valerie advises if Theo loves Claire, he has to show her.

Over at the Salem PD, Eli gets Valerie’s message. Lani suggests he go see her. Eli recalls the tension with his mother but Lani reminds him of Valerie’s continued love. Eli calls Valerie, who tearfully accepts his invite to get together.

Eli and Lani approach Valerie’s table at the pub, unseen, and listen as she recalls a story to Theo of having to put Eli on the bus alone as a child. When the plane went down, the thought of losing him was more than she could handle. Eli makes his presence known and takes his mother in his arms. Lani and Theo leave Eli and Valerie alone, where Eli apologizes for the way he left things. He knows how hard it must have been for her. They agree to work on their relationship and sob in each other’s arms. Julie appears and hugs her grandson. She and Valerie never gave up. Eli’s taken aback to hear Julie refer to Valerie as part of their family. Julie leads them all away for a surprise. at the loft and apologizes. Claire stops him, he’s not the one who needs forgiveness. Claire hands Theo Ciara’s letter. After he reads it, if Theo doesn’t hate her Claire says, “You know where to find me.” She leaves and Theo opens the letter.

Julie gives Eli a tour of Martin House, where she plans to throw a party for all the survivors. Eli’s stunned to hear Julie bought the property for him. Valerie and Lani listen as Julie claims she wants Eli to have a piece of Salem history. Eli’s touched, hugs his grandma then privately expresses to his mom that it’s the second gift he’s received today.

Sonny’s big move at Titan is not well received.