Wednesday June 21, 2017: Chad and Gabi return home and get to see their kids, Chloe gives Nicole her baby back, and Sonny and Deimos fight. 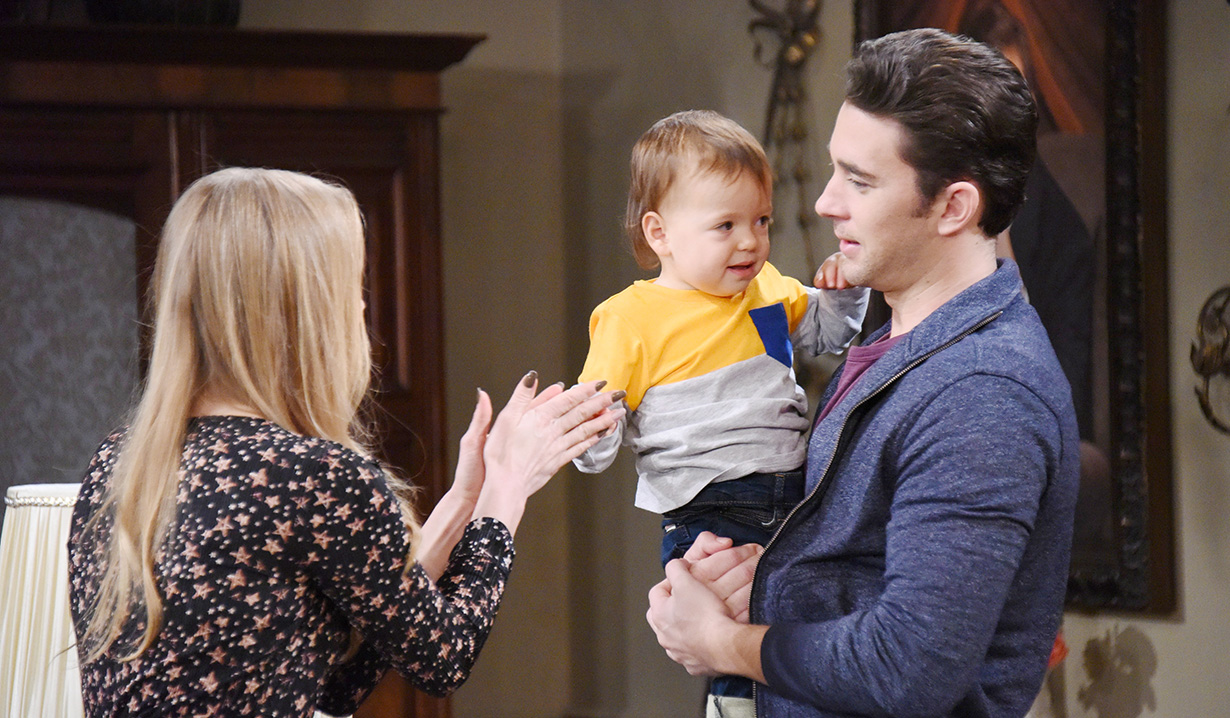 At the hospital, Sonny finishes checking in on Paul and notifies Marlena that he’s almost back to his old self. Marlena leaves the area and Sonny spots Deimos. Sonny orders his uncle to leave, vowing to crush him when he’s in charge at Titan. Deimos laughs. He doesn’t take his threat seriously. Besides, he’s building something bigger and more dangerous. He doles out some veiled threats until Sonny grabs him and yells to shut up. Deimos grabs Sonny’s neck. Sonny snipes that he’s not afraid of him but Deimos thinks he should be. He throws Sonny to the floor, where the cursed amulet drops from his pocket. Sonny hides it and gets up. Deimos is positive Sonny will soon find out he doesn’t have the temperament to run Titan. Deimos strolls off and Marlena returns. Sonny confides that almost losing Paul has made him realize how much he loves him. He didn’t think he could feel that way again after Will. Marlena’s sure that Will would be happy for him.

At SPD, a cop gives Hope Dario Hernandez’s file on the downlow.

Dario arrives at the Martin House. She apologizes for cancelling her trip but he assures her he understands. Abby receives a text from JJ that the castaways were saved. She tells Dario and they hug, thankful. Chad texts and wants to see her. Dario leaves a message for Gabi to call while Abigail heads to Chad’s. Rafe arrives at the DiMera Mansion with Arianna and Gabi rushes to hug her little girl, then Rafe, who thanks Chad for keeping his little sister safe. They explain to the cop that they’re a couple now. Rafe’s surprised and has questions for them. They explain everything. After Rafe leaves, they put the kid down to bed and joke about missing the island. Chad would do it again as long as he ended up with her. They kiss just as Abby walks in with Thomas. It’s awkward. Chad grabs the kid for hugs while Abby and Gabi embrace. Gabi gives them privacy and Abby and Chad get into it about their divorce and how Chad moved on fast. Abby asks him to sign the papers as soon as possible as there’s “a situation with Dario.” Chad asks if they’re dating, then when she’s silent, he accuses her of hooking up with him. She denies it but says they’re engaged. Chad finds it a joke. He calls his lawyer so he can end things as soon as possible, tearing up while on the call. Afterward, he tells Abs that it’ll be taken care of by the end of the day. Abigail’s sad. This isn’t how she wanted it to go. Chad snaps, asking if she ever cared about their marriage since she abandoned him a few times now. Abby’s startled and says of course she did. This isn’t how she saw this going. Chad asks how she expected it to go when he hears she’s been with Dario for a few weeks and is probably already having sex with him? Abby cries and runs out, while Chad downs some booze. Chloe drops by the Kiriakis mansion with Holly. Chloe couldn’t get the voice out of her head telling her to take Holly home. To her mother. Nicole and Brady are speechless. Chloe now knows how much her friend loves Holly. Nic also knows Chloe loves the child. Chloe sobs. She does love Holly but cites that love can make you do crazy things. It can cloud your judgement. She hands the baby over, promising to turn custody over to her. She apologizes to them both, several times, and they accept. Nic wants Chloe a part of Holly’s life. Nic takes the baby away and Brady says they’ll be sure to visit so Parker can bond with his little sister.

More: Nadia Bjorlin off canvas for a time

Rafe appears at SPD and Hope hides Dario’s file. Hope notices he’s down in the mouth. Rafe fills her in on his visit with Chad and Gabi. He’s not happy. Hope calls it “messy.” Both agree that Chad’s not over Abigail. They get a notice that the Candyman’s been spotted.

Gabi greets Dario in the park with a hug. She makes him happy by letting him know she and Chad are a couple. He says the timing couldn’t be better and reveals he and Abby are engaged. Gabi shoves him and says, “Get the hell out.” He thinks everything is going to turn out great for them both.

In the alley, Deimos receives a text with a warning that the police are raiding the lab and know he’s Candyman. He curses and runs to the park where he calls someone, thanking them for their text. He has to get away for a bit. He sure could use that amulet.

Chloe returns to the Inn and cries, while holding Holly’s blankie.

Gabi returns to the mansion where Chad’s snuggling Thomas.

Dario arrives back at Martin House and Abs tells him the divorce will be final soon. She says, “To hell with it. Let’s just get married,” but her smile doesn’t meet her eyes.

Gabi and Andre’s meeting is tense.

Eli gets a gift from his grandma.