Tuesday June 20, 2017: Nicole is floored when Chloe makes her an offer, Steve takes Kayla to a surprise luncheon, and Rafe gets help from Rory on the Halo case. 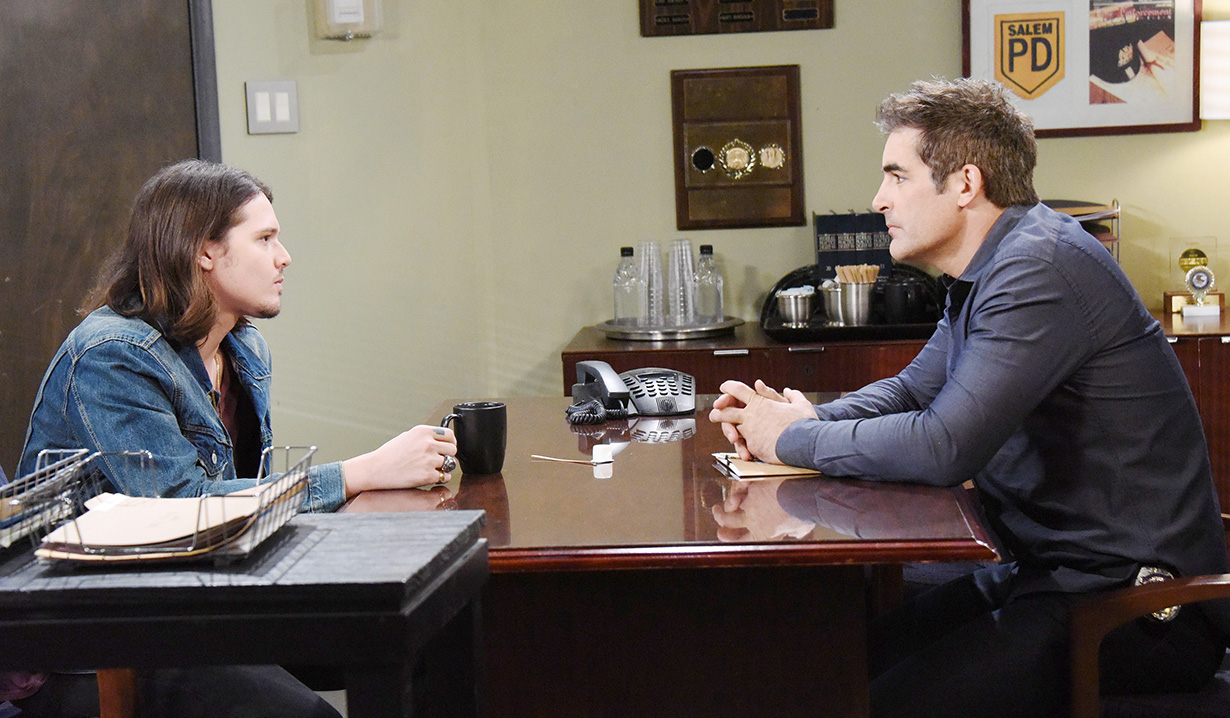 At Mandalay, Steve overhears Tripp and Jade planning a surprise for Kayla and questions them. Tripp glances at Jade and she quickly lies that Tripp wants to take Kayla out for a nice lunch at TBD in thanks for letting him shadow her. Steve is moved and offers to get Kayla there soon. He goes and Jade tells Tripp to get TBD to set things up. She jokes, “Dr. Kayla better eat all she can. I hear the food sucks in prison.”

Jennifer runs into Eric’s office at the Horton Center to update him that the castaways were found. They hug, happily, and then Eric is about to ask her on a date when a call comes in notifying Eric that Nicole’s starting community service – with him. He runs out. At the Kiriakis mansion, Brady reads in bed while Nicole has a dream that she has seen teenaged Holly (Played by Gianna Lepera) at the park, all grown up but Holly doesn’t recognize her and tells her that not only is Chloe Lane her mother but she would never love Nicole. Nic wakes up devastated.

At SPD, Rafe reminds Hope of JJ’s friend Rory who might know something about Halo. Jennifer arrives and there are hugs all around. Rafe goes to call Rory and Jenn and Hope talk about Abigail’s decision not to get a quickie divorce. Hope’s glad to hear. Jenn needs advice about dating Eric. Hope suggests taking it one day at a time. Rory (played by Kevin Riggin) arrives and Rafe questions him in the interrogation room about who is making and distributing Halo. Rory hesitates but then agrees to find out.

Tripp arrives at TBD and pays the waiter to rush the surprise lunch.

Steve goes to the hospital to tell Kayla the castaways were found. She’s thrilled. He drags her off for a surprise…

Eric finds Brady at home and says he just learned that Nicole has to work with him. Eric tried to talk the judge out of having Nic work at the Horton Center but she brushed him off.

Nicole finds Chloe at the park with Holly. Nic compliments Holly’s outfit and hears that Holly was on her hands and knees today. It’s only a matter of time before she’s crawling. Nicole offers to help baby proof the Inn but learns that Chloe’s leaving Salem. Nicole’s upset but thanks Chloe for going to bat for her at her sentencing. Chloe offers to let Nicole hold the baby and say goodbye but Nicole worries she wouldn’t be able to let her go. Chloe starts to weep. She promises Holly will grow up surrounded by love and offers to send her updates. Nic cries her goodbye.

Kayla and Steve arrive at TBD. Kayla’s touched about Tripp thanking her for shadowing her. Jade pops in to say thanks for all she has done. Tripp invites Jade to sit while Tripp talks about how kind Kayla is with her patients – and him. After lunch, Jade thanks Joey for letting her stay, and places a hand on his. Kayla looks unimpressed. Jade asks Joe to accompany her to a job interview but Kayla points out that’s not professional. Jade goes and Kayla begs Joey to cut her out of his life permanently.

In an alley, Deimos rants at someone about ‘the product’ on a call. He bumps into Eric, “Well, well, well. What do we have here. The defrocked priest.” Eric tells him to keep walking but Demios can’t resist making jabs. Eric takes off. Back at the Horton Center, Jennifer takes a call and then accidentally stumbles upon Eric’s stash of unsent letters to Nicole. Jenn lets him know about her findings and worries he’s obsessed. Jenn learns that he didn’t write to anyone else and asks him to be honest with himself about his feelings for Nicole, then dumps him. When she goes, he re-reads Joe finds Jade at the square. He gives her a doggy bag and then reminds her they’re never, ever getting back together. She thinks it’s his mother talking. He shrugs and goes while Tripp returns to blather about making Kayla pay.

Rory returns to SPD and tells Rafe and Hope he saw the Candyman going into the lab where they make Halo. He shows them a photo he took. Hope’s rocked that it’s Deimos.

Nicole arrives home and learns the castaways are saved. She doesn’t jump for joy. She fills Brady in on Chloe leaving town. They rehash losing Holly. Later, Chloe shows up on their doorstep.

In the park, Kayla and Steve are happy Tripp is a part of their family. They kiss.

Rafe and Hope catch a big break in their drug case.

Deimos and Sonny have it out.