Monday June 19, 2017: The people on the island are saved, Tripp makes a plan to screw with Kayla, and Adrienne learns Anjelica is after her. 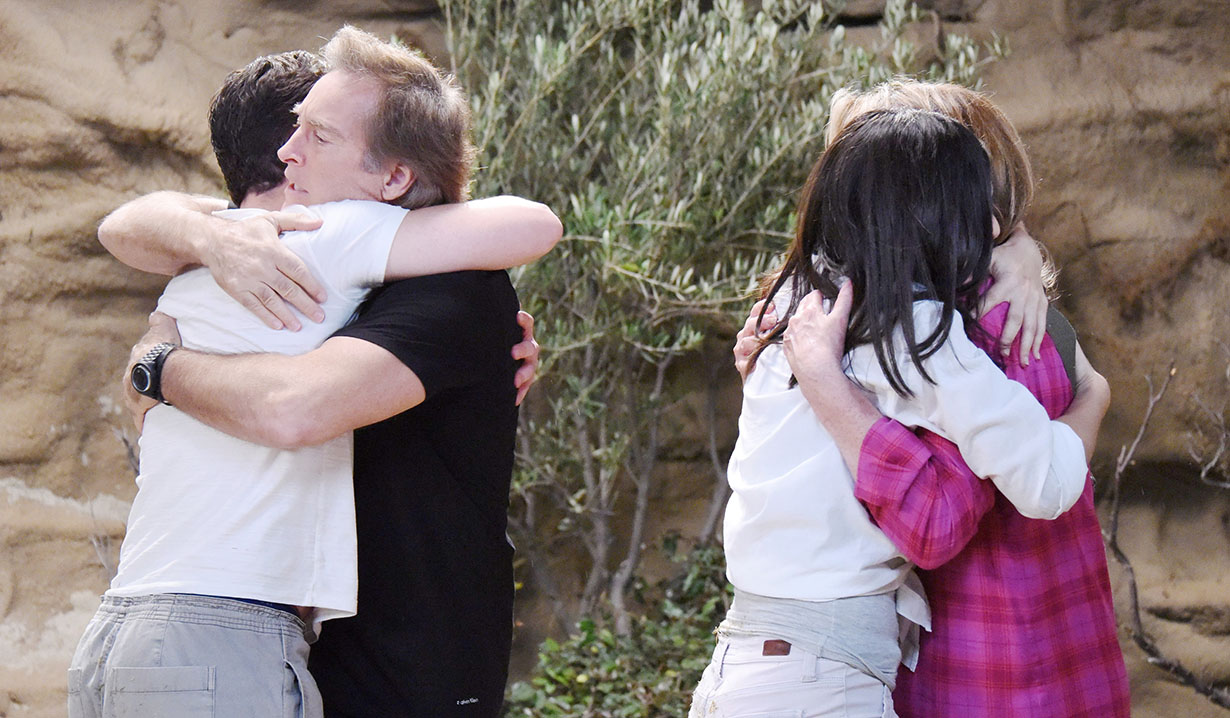 Tripp shadows Kayla on her rounds again at University hospital. She learns one of her diabetic patients has died and becomes emotional. She’ll remember him and his knock knock jokes fondly. Kay tells a nurse to look through the man’s file and ensure they did all they can. She tells Tripp mistakes are costly. When her back is turned, Tripp practically rubs his hands together with glee while he mutters, “Costly. Yeah.” Later they visit Rebecca, another patient who is ill. Tripp watches how loving Kayla is. They leave Rebecca and Kayla says she’s grateful not only for his friendship but to work at his side. He says he feels the same. Kay’s just happy one of their kids took an interest in medicine.

More: Tickets to meet former stars of Passions at Passions-fest Steve finds Justin with Adrienne at the pub. They discuss the missing Salemites and how there’s no news. He tells them the ISA is now searching for them, as well as John and Marlena. Adrienne holds Justin’s hand and tells Steve they’re joining the search, then looks down, momentarily startled that she’s holding Justin’s hand. She goes with it. Justin goes to check with the pilot and Steve wishes he could do more. He fills her in on finding Anjelica in New York and Adrienne is baffled. “It’s personal. Anjelica believes you did her wrong and is out for revenge.” Justin returns and they tell him. He finds it insane, and remembers Anjelica as narcissistic. It makes no sense. He goes to call her. Steve says he is digging into her past and will find something his sister can use as leverage. She can’t think about it. She needs to focus over Sonny and breaks down. She goes and Justin returns. Anjelica won’t take his call. Kayla calls Steve and lets him know how swimmingly everything went with Tripp.

On the Greek island, Sonny worries for Paul’s health and wants to untie him. Paul begs him not to. Elsewhere, as Gabi and Chad bask in the afterglow of sex, JJ and Lani walk up. JJ looks upset. Gabi and Chad dress and then JJ and Lani leave. Chad finds them some fruit and makes it disappear – by eating it. Chad demonstrates his strength by cracking nuts with one hand and Gabi giggles. Later, JJ and Lani find Sonny with Eli and Paul who is feverish. Privately, Paul tells Eli that it’s starting again and if the time comes that he needs to be killed, he asks Eli to do it. Eli promises and calls Paul a good man. Sonny overhears and pulls Eli aside, demanding he not respect Paul’s wishes. They whisper-argue while Paul works free of his binds and looks at them aggressively. Meanwhile, nearby, Gabi and Chad ponder gathering more nuts when they hear voices. Out comes John and Marlena. Gabi and Chad jump up, shocked. Marlena cries, “You’re alive!” There are hugs all around. The four of them rush to the others and stop the argument, but Paul manages to dive at Eli and grab his gun. They struggle over it. Eli’s able to take Paul down because he’s so weak, and Eli holds the gun on Paul while Marlena cares for him. Sonny tells her Paul has Jungle Madness. Marlena remembers it as the same illness Peter Blake contracted. When Paul comes to, Sonny tells him they’ve been rescued. Marlena gives Paul a sedative and assures Sonny there’s an antidote back home. Gabi reveals she’s psyched to get home and see their kids but she’s afraid. Chad agrees they can get through whatever life throws at them. They kiss and bury the amulet. Sonny watches from nearby and once they’re gone, stares down at the sand.

Tripp sits at the square and flashes to Jade spinning some of the facts in Ava’s case to make it look like Kayla killed Ava. Jade arrives and Tripp tells her about his rounds with Kayla who he thinks is “acting her ass off.” Jade feels bad for Tripp. Tripp tells her that his plan is to screw up the patient files which are reviewed by the other doctors and make it look as though Kayla is making mistakes. He’ll change the names of the drugs, then the dosages, and make it look like “Kayla is the doctor of death.” Jade loves it but will anyone actually believe that? Tripp calls it a hurdle he needs to get over. Jade worries. Tripp says he’s not actually going to kill anyone.  He could never do that. He says they’ll bring down Kayla slowly, then looks up. Steve’s watching… Outside the pub, Adrienne takes a call from someone with news that Sonny and everyone else has been found – and saved. She bursts into tears and hugs Justin.