Days Recap: Julie lashes out as news of the missing plane spreads

Wednesday June 7, 2017: Jade worries over a blunder, Abe breaks the news of the missing plane to Theo and Valerie, Justin comforts Adrienne after telling her about the plane, and the islanders worry about Paul. 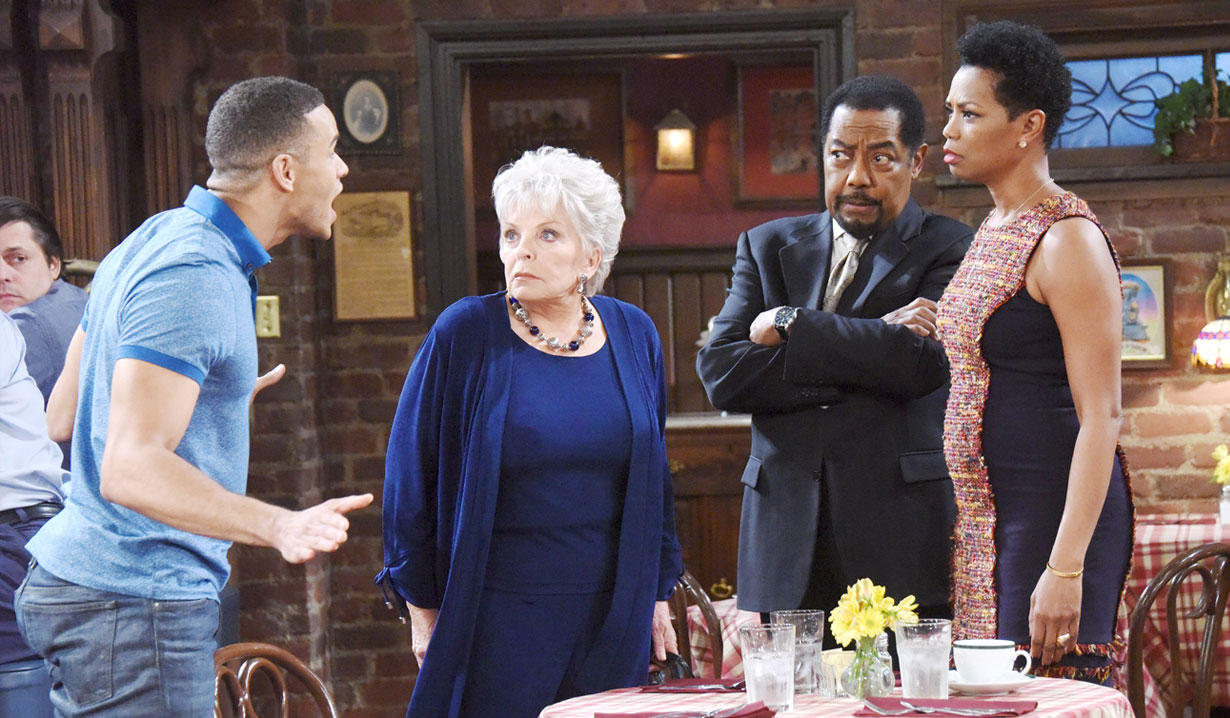 Jade drops by the loft and asks to borrow Claire’s laptop. Claire lets her use it while she gets ready for a movie date with Theo. Jade loads the sex-tape she made onto it and thinks Claire will thank her later. Theo and Claire prepare to go to the movies, and he grabs his laptop. Jade is stunned because she uploaded the video to Theo’s laptop instead of Claire’s. Suddenly, Abe calls and gives Theo the news about Chad and Lani’s plane, and asks his son to meet him at the pub. Claire says she’ll go with him, and they leave. Jade worries if Theo sees the video that he’ll hate her and make Claire hate her too. She realizes she needs to get Theo’s computer before he sees it.

Justin meets with Adrienne at the Kiriakis mansion and gives her the news about the plane. Adrienne calls Lucas to share the news and tells him to stay with Arianna for now. Adrienne can’t fathom the idea of losing Sonny, or Arianna losing her remaining parents. Later, Justin makes calls to the Greek equivalent of the FAA to have some islands near where the plane was last known to be searched. To keep Adrienne’s mind off the situation he suggests they play checkers.

Abe meets Valerie at the hospital to give her the news that the plane carrying Eli has gone missing. He invites her to join him at the pub. On the island, Sonny believes he can get through to Paul, but JJ warns him that he can’t get because Sonny is sick. Chad agrees and says anyone who tries to stop Paul may end up dead. JJ reminds them that the diary they found spoke of a cure, but Chad points out they don’t have it. Eli suggests they all get back to the plane for protection. Gabi is in no condition to make the hike, so Lani offers to stay behind with her. Sonny stays also in case Paul returns. Sonny worries about Paul and decides if he can find him, he can rationalize with him. Sonny heads off in search of Paul, and Gabi and Lani discuss what’s going on between Gabi and Chad. While they talk, Paul spies on them from the bushes. Elsewhere, Chad, JJ and Eli stop and find fresh water. JJ confronts Chad about him and Gabi. Both JJ and Eli only want what is best for Gabi and warn Chad not to hurt her. The men return to the camp with water, and Lani, Eli and JJ go off to look for Sonny and Paul. Chad tends to Gabi and cleans her head wound, which leads to a passionate kiss. Meanwhile, the others find Sonny and beg him to return to camp because he’s putting himself in danger. Eli says they can search for Paul in the morning when there is light. Sonny agrees and they return to camp, where Eli suggests they all take guard duty shifts while the others sleep. At the Brady Pub, Theo and Claire meet with Abe and Valerie. Theo checks his laptop to see if anything has been released on the news about the plane. He notices a new file on it and tries to pull it up. Suddenly the fire alarm goes off and everyone rushes out of the pub. Jade pulled it as a distraction and when nobody is looking switches out Theo’s laptop from his backpack with Claire’s. Abe announces it was a false alarm and they can all return inside. Jade asks Claire if they can go back to the loft because they need to talk. Claire agrees and they leave. Later, Julie arrives in a huff after hearing about the plane. She swears to never forgive Valerie if something happens to Eli because they had so little time together because of her. Valerie and Julie get into a shouting match, which Theo breaks up because Eli wouldn’t approve of them fighting. Julie cools down and apologizes to Valerie. Valerie decides to go to St. Luke’s to light a candle and pray. Julie joins her.

Back at the loft, Jade shows Claire the sex video she made. Claire shouts that she is human garbage and asks how she got the video. Jade explains how she made it in order to help her. Claire orders her to delete it and calls her insane. Jade deletes it, and Claire demands the camera she taped it on too. Jade hands it over, and Claire throws Jade out.

“Days of our Lives” will be pre-empted on Thursday and Friday. A new show will air on Monday June 12.

Days of our Lives is pre-empted...