Days Recap: DNA results are in and Tripp and Steve learn the truth

Monday March 27, 2017: Eddie and Dario worry that if Gabi doesn't wake up soon that she never will, Tripp and Steve get big news, and Brady leaves Salem to be with Nicole. 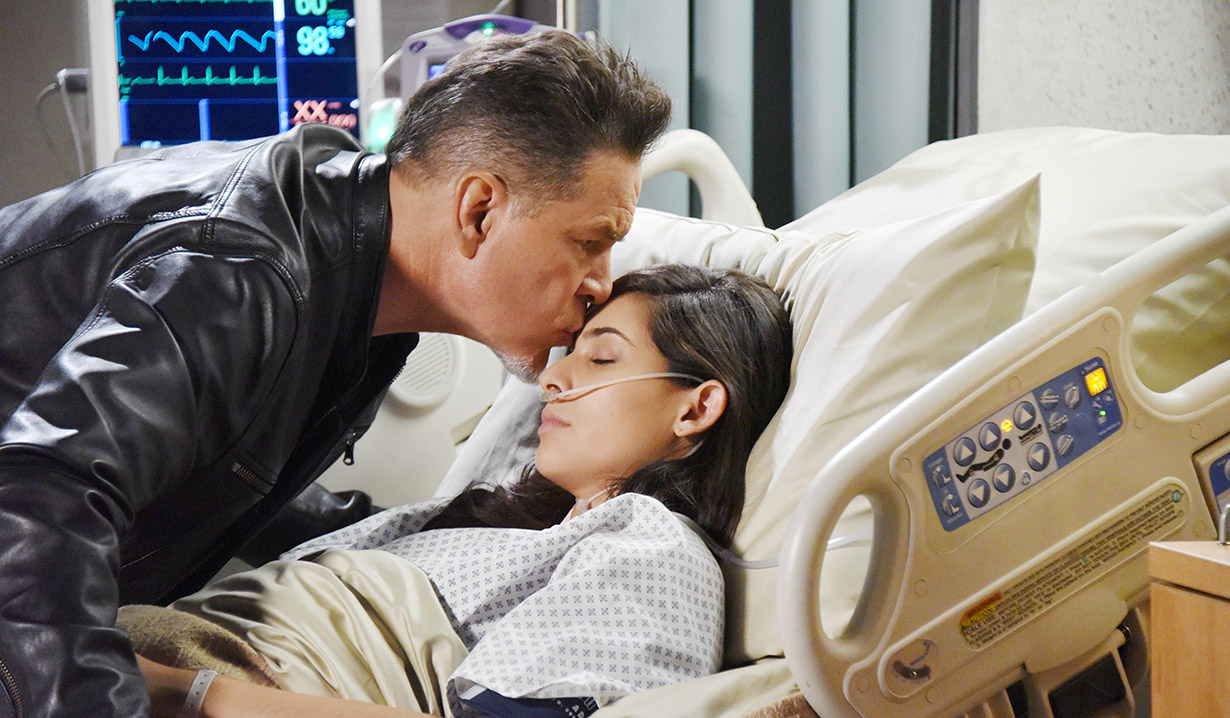 Brady meets Marlena at the Brady’s pub, asking to talk to her in confidentiality – as a patient. “I’ve been aiding and abetting a wanted criminal,” he says. He tells her all about falling in love with Nicole and helping her escape. Marlena tries to reason with him but he believes Nicole’s doing the right thing. Marlena thinks he knows as well as she does that this is a dead end street.

At the loft, Jade takes a few pills and when Joey appears, she clutches at her stomach, telling him she’s getting worse. Kayla arrives. Jade thinks she’s there to check on her but she’s there to see Joey – in private. Jade goes up to her room and Kay tells her son that they may have found his brother. They’ll know for certain soon, and if so, she’s not sure if Tripp should know the details of Ava’s death.

More: Deconstructing DOOL: These are the kidnappings of our lives

Steve and Tripp have their blood drawn at University Hospital. Tripp says, “This is so weird.” He says it’s so out of the blue. Steve agrees. Tripp says he’s been looking for him for years. Steve promises if he knew his son was alive, he’d have found him. In Gabi’s room, the respiratory therapist, (played by Krizia Bajos) tells Dario that Gabs isn’t out of the woods yet. Back by the hub, a nurse tells Steve and Tripp that the test results have been delayed. They leave. Eddie arrives in Gabi’s room. Dario says Rafe just left and tells him Gabi isn’t improving. Eddie kisses her on her forehead and calls out to her. They may have to intubate if she doesn’t start breathing on her own. Dario doesn’t like that and wants to tear Deimos’ head off. Eddie talks him down, knowing Deimos is counting on a retaliation.

Abigail’s woken up on the sofa of the DiMera mansion by Thomas’ crying. Chad asks how she’s doing. She insists she’s fine and hopes Gabi is, too. Abigail wants to see her but Chad’s not sure it’s a good idea, considering those boundaries they set. Abigail insists everything is different now. Those boundaries no longer apply. Chad calls Abby a saint.

News: Ladies of the Lake gets May debut on Amazon

Steve and Tripp arrive at the loft and the younger men introduce themselves. Tripp wants to know about Ava but Steve would like to wait until they hear back from the hospital. Jade comes downstairs and introduces herself and grabs her pills and heads back to her bedroom. Kayla explains that Jade’s recovering from surgery. Tripp winks at Joey, calling Jade “one good-looking roommate.” Tripp tells them that his mom’s dead and his father used him as a punching bag so he split. He admits he’s uncomfortable talking about himself. He likes the loft and asks how much for the loft. Joey doesn’t know. His parents pay for it. Tripp laughs, joking that maybe he can get in on that action. Steve tells Tripp how horrible his father was, too, and says it does get better. Tripp grins. He’ll have to see. The nurse calls and gives Kayla the news. Tripp is Steve’s son. Steve tells his kid he’s really happy about this. They hug and there’s a crash. Jade has fallen down the stairs, clutching her stomach.

Abigail and Chad arrive at the hospital and Dario tells them Gabi’s still unconscious and that he’s pissed. He blames Chad. Chad’s so sorry. Dario says the doctors can’t figure out why she’s not getting better. “It’s like she’s not even trying,” he cries, before stomping off. Abs asks Chad to be with Gabi while she goes to Dario. Eddie finds Chad and thanks him for saving his daughter’s life. Chad blames Deimos. Eddie wants to see the man broken and in pieces but he needs proof first. “I’ll get you the proof,” Chad says. Eddie relays his concerns that if they intubate, Gabi won’t be able to breathe on her own again. Chad’s overcome with emotion and when Eddie leaves, he sits at her side and tells her he needs her to get better, that she has people who love her and can’t lose her, including him. He kisses her. Meanwhile, Abigail finds Dario. He apologizes for going off on Chad. Abby gets it. She wants him to direct the anger toward Deimos. As they talk, Dario confesses he’s in love with Abigail. She’s shocked. He tells her Chad doesn’t deserve her because he loves her with half a heart. Later, Eddie visits Gabi alone, while Abigail finds Chad near the hub. Suddenly, Eddie rushes out of Gabi’s room, asking for the doctor. He tells them that she started fighting! Chad’s relieved and Gabi wakes up with Dario in her room.

News: This week’s spoiler digest for all four soaps

At the Kiriakis mansion, Brady tells Victor he’s going on an extended vacation with Tate and Nicole. Victor says, “God you’re so sweet, and so stupid.” Brady responds, “We can Skype. That way you can belittle me online.” Victor says if he needs anything, to just call. He will. “I do love you, you know that,” Brady says. Vic knows.

Chad has it in for Deimos.