Days Recap: Abby and Gabi wind up in the hospital after being poisoned

Thursday March 23, 2017: Steve meets his son, Sonny rails at Deimos over the kidnappings, and Gabi and Abigail almost die. 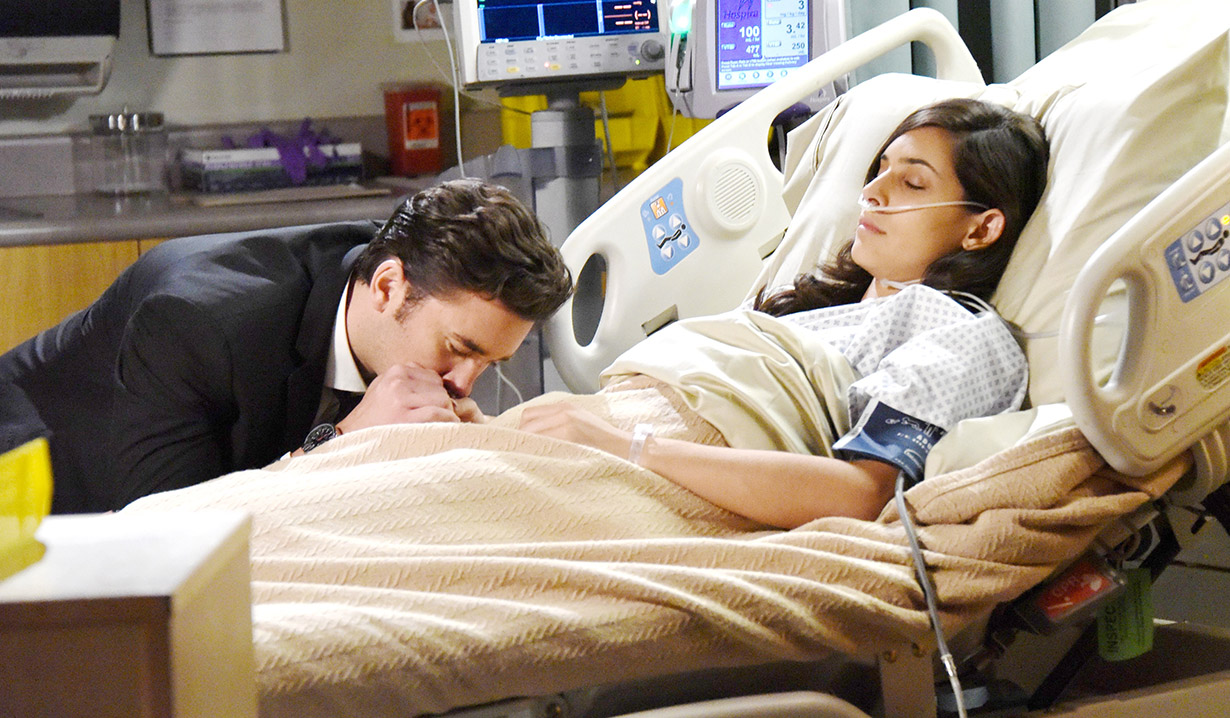 At a diner, outside of Salem, Steve and Kayla discuss Jade sinking her claws deeper into their son. When the owner arrives with their menus, they ask after an employee of his – Tripp Dalton. The owner snaps that he no longer works there. He thinks the kid was passing out free food. They notice the man’s black eye and he admits it has to do with Tripp. He goes and Steve appears crushed. Kayla keeps up his spirits. Suddenly, the owner starts yelling and Tripp appears.

Steve’s eye widens as Tripp yells at the owner for groping Celia, another worker, and demands the money he is owed. Steve steps in and tries to broker peace but winds up hitting the owner. Tripp thanks Steve and asks who he is. “I think I might be your father,” Steve says. They introduce themselves and tell him his mother Ava never told him she was pregnant. Steve says her father forced her to give Tripp up. He’ll tell him the rest after the DNA test proves they’re father and son.

Sonny arrives at the Kiriakis manse and starts yelling at Victor to reign Deimos in. He has no morals, or self-control. Victor tells him to chill. Sonny worries Deimos has kidnapped Chad, Abigail and Gabi but Victor says there’s no proof. He asks him not to do anything rash and tells him he’s the best of their family. One day he will run things. Sonny asks when.

Just in: Susan Lucci to The Today Show

At TBD, Paul, JJ and Dario try to figure out where Chad went. They are able to track him to Warehouse 8 and run off.

At Warehouse 8, Deimos tells Chad to choose between the two women. The countdown begins and Chad pauses, unsure of which woman to give the antidote to. He chooses to give half to Abigail at the 18 second mark while Gabi loosens her binds, coughing from the poison being pumped into her through the IV. As the timer counts to 1, Chad reminisces about playing ball with Gabi in high school and gives her the rest of the antidote. Gabi frees herself and gulps it back. Abigail asks Chad to go to Gabi. He does just as Dario, JJ and Paul burst inside. The men untie the women and get them to the hospital. Gabi starts convulsing and Abigail passes out. Meanwhile, in the alley, Deimos listens and swears in anger that they’ve been rescued.

Deimos arrives home, downs some booze and Victor tells him Sonny just stopped by to rant about Deimos kidnapping people. Deimos says there’s no evidence, but fills him in on what he did and rolls his eyes that Chad tried to save both women. Victor doesn’t like how this is affecting Sonny. Deimos doesn’t care about Sonny. “You will care,” Victor barks, slapping his newspaper on his leg.

At the hospital, Abigail’s unconscious with Chad at her side, asking her to fight. Dario appears and tells Chad Gabi’s the same. Chad blames Deimos and fills him in on what happened before he got to the warehouse. JJ and Paul watch over Gabi and Paul calls Sonny to fill him in on what’s happened and Sonny tells him he’s on his way over. Dario stays with Abby while Chad leaves the room and before she wakes up, Dario tells Abigail he’s in love with her. Once awake, she asks for Chad. Chad returns and kisses his wife. She worries about Gabi and asks him to find out how she is so Chad goes to Gabi’s bedside and begs her to get well.

At the loft, a reporter calls Jade to get a statement about her dad. She disconnects with him and tells Joey about it. She bemoans having nothing and being alone. Joey says she has five people she lives with and he’ll take care of her. She hugs him, then asks if he can remind her when to take her medication. Joey can’t. She needs to stand on her own two feet and says he may not always be around. He hands over the pain meds, telling her only to take them if she truly is in pain. Once his back is turned she downs one, muttering that he only pays attention to her when she needs him.

Related: James Lastovic out as Joey on Days?

Back at the mansion, Sonny stops Deimos on his way out and yells at him about the kidnapping.

Sonny arrives at the hospital and Paul tells him everything that happened. Sonny’s floored that Deimos would do this. It’s worse than they thought and Sonny blames himself. Paul and Sonny visit Abigail and Sonny vows to ensure her safety. Chad can’t get Gabi to wake up so Dario takes over watching her and Chad leaves her room as Deimos arrives.

Nicole starts worrying Hillary will realize she’s on the lam.