Days Recap: Chad is forced to choose between Abigail and Gabi

Wednesday March 22, 2017: When Chad, Abigail and Gabi go missing, everyone bands together to find them, Chad must make a difficult choice, and Lani tries to help Eli with his mother. 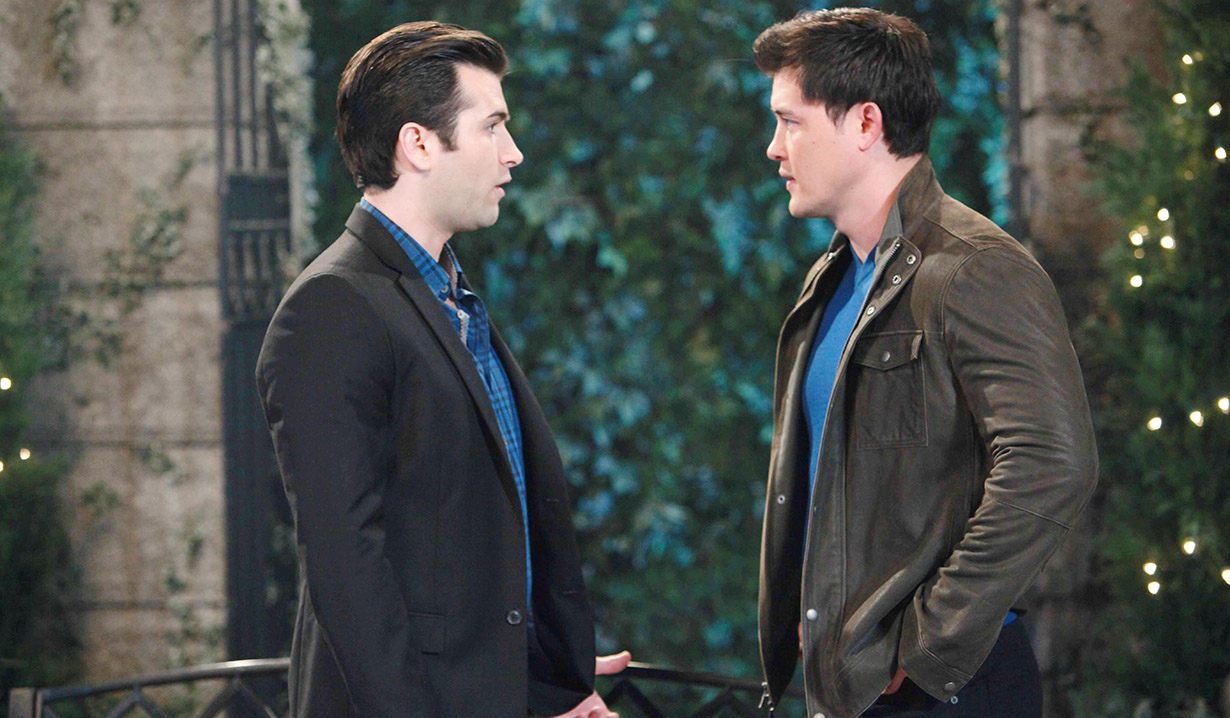 At TBD, Chad introduces Abigail during his speech at the party and when she doesn’t appear, Dario goes outside looking for her. Dario finds Abigail’s purse and rushes back inside to tell Chad. They worry and Chad calls Abby but she doesn’t answer. From across the room, Eli watches. Chad assumes Deimos is involved. Dario calls someone to find Abigail as Chad gets a text from Abigail’s phone telling him “We’ve got your wife. Come to Warehouse 8.” His jaw drops and he runs out. Dario calls Gabi to see if she has seen Abigail, but there’s no answer.

At the Kiriakis mansion, Deimos takes a call from his goon and says, “Chad DiMera won’t be so lucky tonight.”

Sonny meets Paul in the park. Paul tells him Deimos has two guys on special assignment. Sonny assumes this has to do with Chad. Paul doesn’t like this and hopes they can stop him before he hurts Chad. Sonny thinks the only way to stop his uncle is by catching him in the act and sending him to jail.

Deimos’ goon shoves Gabi into a warehouse where Abigail’s been tied up. The goon ties Gabi up and they ask what this is about, assuming it’s Chad. Abigail tells the man to let Gabi go since she has nothing to do with this. Goon says, “That’s not what I hear.”

Sonny arrives at the mansion and overhears Deimos making plans for Chad. Sonny orders his uncle to tell him what’s going on. Deimos sneers and tells him Chad stole from them, and is their enemy. Sonny calls Chad his best friend. Deimos bellows, “You are a Kiriakis!” Sonny leaves the room to call Paul, telling him to get to TBD and protect Chad, and while he’s gone, Deimos takes off.

At the square, JJ and Lani discuss their latest stakeout which was a bust. Abe interrupts and asks for space with his daughter. JJ goes to get coffee while Lani asks him to learn to deal with JJ. Abe just wants to keep her from making a mistake. Lani talks him down. They discuss how Valerie and Eli’s situation is affecting them and how angry and hurt he is. Abe was hoping she could talk with Eli to make him see his mother’s side the way she did with her own mother. They share a moment, happy to have found each other and forged a relationship but Lani’s not sure she can be of much help. She’ll try. JJ returns and sees Abe still there. “I thought you’d be gone by now,” he says. Abe leaves and Lani hits him on his arm for being rude. She fills him in on what he wanted. JJ says Eli’s at the fundraiser so they head over.

Just in: Jude Law appears on Live with Kelly, Carl Reiner and Rob Reiner to The Talk

Chad searches the alley outside the warehouse for Abigail and Deimos’ second goon smashes him in the head with the butt of a gun. Chad goes down and is dragged inside and tied up. Abigail calls his name and he awakens. He starts yelling, asking what’s going on and notices Gabi and Abigail have had IVs inserted into their arms. Chad demands to know what’s in them and has a meltdown. He loses his voice as he screams at the goon, “I’ll kill you.” Goon places a speaker on a table and someone starts laughing through it, their voice scrambled. Deimos taunts Chad about being helpless. He explains that there’s a fast-acting poison in the IV bag and the goon will give Chad enough antidote for one woman. He has thirty seconds to choose who will live or die. Outside, Deimos talks into the voice scrambler as the IVs begin dripping, saying, “Drip…drip…drip…” Abigail starts coughing and Deimos starts counting down. Chad’s let loose but doesn’t know which girl to give the antidote to. Gabi coughs and tries to free herself. Chad gives Abby the antidote.

Back at TBD, Dario makes a few more calls looking for Gabi. Lani and JJ arrive and greet Eli outside. JJ goes in and Lani reminds Eli they’ve met at the funeral. She says her dad asked her to talk to him about his issues with his mother. She tells him about her situation with her parents and mid-way through, Eli tells her to stop meddling. Pissed, she tells him off. Paul arrives and goes inside, telling JJ that he’s looking for Chad. He fills him in on everything he knows. Dario approaches and lets them know he can’t find Chad, Gabi or Abigail. JJ thinks Deimos must be after them. They look at the club security footage while Paul takes a call from Sonny, saying Deimos is gone. Sonny’s shocked to learn that Chad, Abigail and Gabi are all missing. They see Deimos’ goon on the video. JJ knows him to be hired muscle. They watch Chad read a text and then run out and figure if they knew what the text said, they could find him.

The search for Chad, Abigail and Gabi continues.

Days Recap: Abby and Gabi wind up in...