Days Recap: Eli meets the Hortons, and Valerie decides to stay in Salem

Wednesday March 15, 2017: Chad can't shake his feelings for Gabi, Eli meets his family, Abe has a talk with JJ about his daughter, and Ciara confesses the truth to Claire. 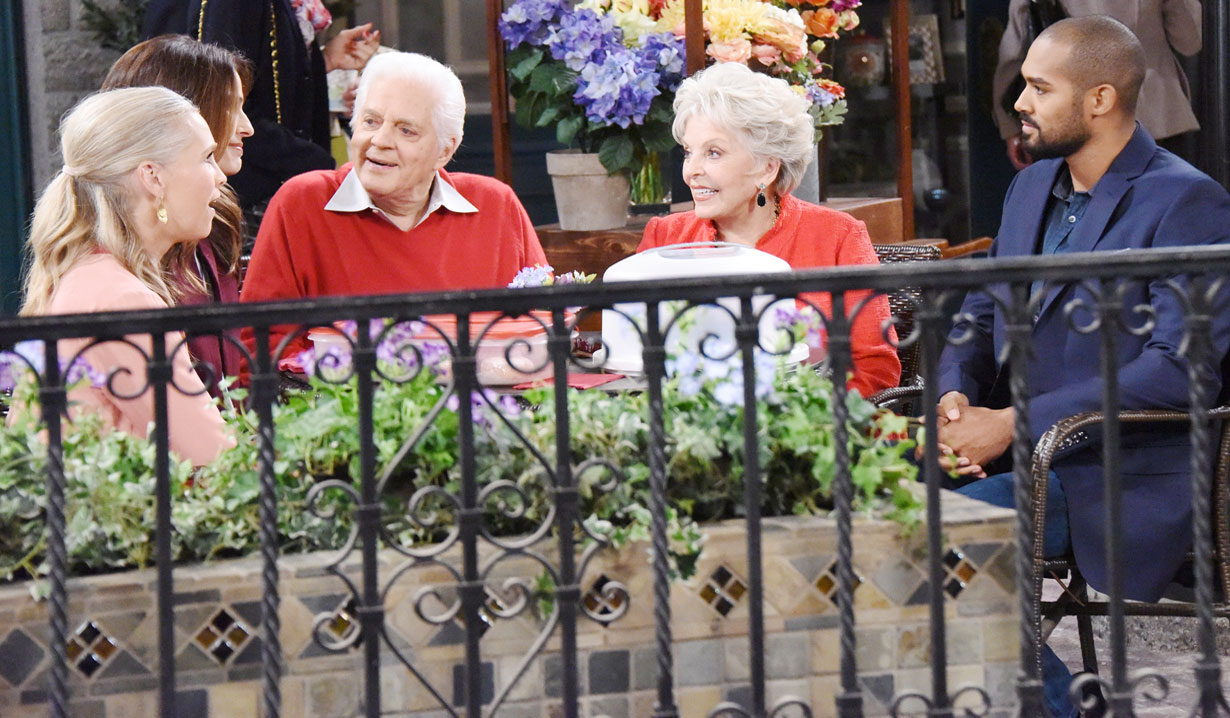 Jenn, Hope, Doug and Julie gather in Horton Square for lunch and to officially meet Eli. Eli thanks Mrs. Williams for putting this together. Julie tells him to call her Grandma. Jenn suggests he could call her Julie like she and Hope do. He thinks Julie works, and jokes she’s too young to be called Grandma. Eli asks how everyone is related, so they run down the complicated Horton family tree, and Eli is shown Tom and Alice’s plaque in the square.

At the Brady Pub, Valerie tells Marlena that she thought she was doing the right thing for Eli at the time. Marlena believes Eli will come around, but Valerie worries her son will never forgive her for denying him the chance to know his father.

Lucas drops Ari off at the Hernandez house after having some play time with her. Ari blurts out, “Play with Chad!” Lucas jokes that Ari seems to have a crush on Chad, and he likes him because Chad was always good to Will. Gabi realizes Ari will be late for school, so Lucas gets her ready.

At TBD Chad gives a speech about the DiMera Foundation donating money to local team sports and athletics. He fumbles a bit when he flashes back to playing baseball with Gabi. After the speech, Chad thanks Abby for the killer speech she wrote. However, he can’t stop thinking about Gabi, and accidentally dumps his beer all over himself. He thinks now he’ll have to go all the way home to change, but Abby has a backup suit for him in Dario’s office. He runs to change, only to have Gabi walk in on him in his underwear. Chad becomes so flustered in trying to get his pants on that he trips and falls over. Gabi tries to help Chad pull his pants up, and they end up giggling. Abby walks in on them and is stunned to see how happy they appear.

Ciara, Theo and Claire hang out at their place. Ciara pulls Claire aside to have a frank discussion with her. She tells Claire the reason things haven’t been good between them is because she still has feelings for Theo. Claire is angry, but Ciara promises not to do anything about it. Ciara asks her to just be more sensitive when she’s around. Claire agrees to tone it down a notch. Claire offers to help her update her online dating profile so she can find someone perfect for her. Ciara thanks her and they hug.

More: Dancing With the Stars’ Maksim Chmerkovskiy on The View

At the PCPD, Abe tells JJ that he doesn’t approve of his dating Lani, because Lani needs someone more mature. JJ respects Abe, but he won’t back off from Lani because he believes he is great for her. He promises to prove that to Abe.

Back in Horton Square, Valerie walks in on Eli hugging Julie. Eli tells his mom that Julie, Grandma, threw a party for him to meet the family. He suggests they get back to it. Valerie tells her son she wants to work things out, and she is staying in Salem. Valerie leaves, and Lucas and Ciara join the gathering to meet Eli. Lucas opens up about his own mother lying to him about him being a Horton. Julie points out that Lucas got a chance to know his father and Eli won’t. Hope suggests they share stories about David. They take turns telling him about his father and other members of their family. They run down Tom pretending to be Norm DePlume, Alice breaking Roman out of jail, Marie accidentally dating her long-lost brother Tommy and more Horton stories. JJ arrives later to meet Eli. Eli makes an announcement and thanks them all for being here and making him feel like part of the family.

Claire meets with Marlena at the pub and vents about what Ciara told her. Claire feels it is hard to compete with Ciara because she and Theo have been friends for so long. Marlena advises her that she doesn’t need to compete, she just needs to think about Theo and his needs. Claire thanks her for the advice.

Claire returns to the apartment. Theo asks what Ciara wanted to talk to her about. Claire says it was stupid boring girl stuff. Claire tells him that she had a good talk with her grandma about them, and she realizes she’s ignoring his needs. Claire suggests it’s time they take their relationship to the next level and have sex.

Abe finds Valerie crying in the park. Valerie admits she is feeling jealous because now she has to share Eli, and feeling jealous isn’t who she is. Abe tells her she did what she thought was best for Eli. He promises to stand by her, and they hug.

Days Recap: Adrienne gets word that...