Days Recap: Adrienne gets word that her tumor has shrunk

Tuesday March 14, 2017: Adrienne's pampered, Brady has a run-in with Victor, and Sonny thinks Deimos could be after Chad. 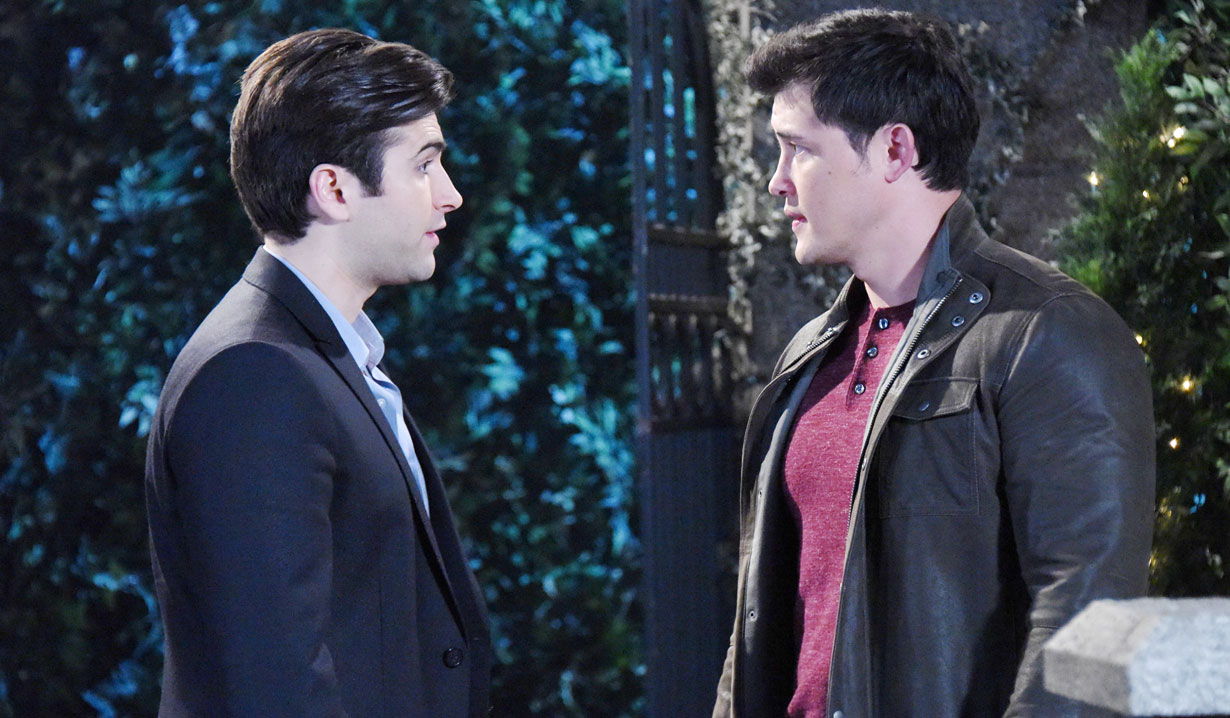 Kate, Lucas, Justin and an esthetician, Clarice, arrive at Adrienne’s Salem Inn suite, telling Adrienne to prepared to get pampered. They were tired of feeling helpless and are treating her to a spa day and new clothes. Adrienne starts to cry, thankful. Justin reminds her of the last time they got a masseuse in their hotel in Dubai. Kate looks at Lucas uncomfortably and she drags Justin out. They’ll be back later to see the final result. Lucas tells her he’ll have a candlelit dinner. After the massage, Justin returns to get his phone. His deposition was cancelled so he has nothing to do. She invites him to stay.

Brady and Nicole sit in some park. He needs to go home to get some cash but asks her to wait. Nic thinks it’s a mistake for him to go on the run with her. Brady reminds her they’ve been friends way too long for him to back out. She hugs him, grateful to have the one person she trusts completely, in her life. He goes and she tells her kid she thought she and Brady would be endgame at one time but she screwed up over and over. Daniel changed that. But now she’s back to counting on Brady as she always has.

Deimos arrives at the Kiriakis mansion where he tells Victor that he tracked Nicole down and she was with Brady. Victor shrugs and asks what’s going on with his antiquities business. Deimos hasn’t any idea why Grigor backed out. Victor does. He’s working with Chad DiMera. Deimos snaps that DiMera is “a kid, a novice next to me,” he says. He goes and Brady arrives, grabs some cash and Victor worries that he got suckered into Nicole’s shenanigans again. He can tell Brady has fallen for Nicole again and is concerned she’ll hurt him the way she always does. Brady thinks his grandfather is wrong and tells him to get Deimos back in his cage. Brady goes to say goodbye to Tate and returns with a bag. He tells Maggie he’s going on a business trip and asks her to play with Tate some. Maggie thinks he’ll help her from missing Holly so much. She looks ready to cry and hopes Nicole comes to her senses. Brady grins and goes. Maggie knows that he’s going to meet Nicole somewhere. She’s hopeful that he’ll convince Nicole to come home. Victor consoles her while she sobs.

News: Ray Liotta on Harry this week, Ice Cube on Live with Kelly

At the DiMera compound, Abigail worries about losing Chad when Deimos figures out Grigor’s working for him now. Sonny arrives. He heard Chad stole valuable revenue from Titan. Chad claims he hasn’t a clue what Sonny means. Sonny grins. “Don’t worry. I’m here to thank you.” It could be the beginning of Deimos’ downfall. Abigail asks them to give peace a chance, then takes off. Sonny’s sorry that Deimos kidnapped him and Gabi. He hopes Chad’s still his best friend. Chad says if he knew what Andre was thinking, he never would have allowed him to be kidnapped. They hug. Chad insists they’ll always be best friends.

Related: Newest soap news for Bold and Beautiful, Days of our Lives, General Hospital and Young and the Restless

Paul meets Sonny at the park. Sonny wants help in getting rid of Deimos from Titan. They consider that Deimos will go after Chad. “When that happens, I’ve got the son-of-a-bitch.” Paul doesn’t like using Chad as bait. Sonny promises he won’t let anything happen to Chad but Paul doesn’t think he can guarantee that. “I’ve never seen you like this,” Paul says.

Kate arrives at the DiMera manse and learns Grigor is now working with them. Kate’s proud. Chad goes to take a call and tells Kate that sometimes in business you have to bend the rules. Abigail calls it breaking, not bending. DiMera can’t ignore such a lucrative side business. Things can get messy. Everyone, including Gabi gets that. “Perhaps you can get her to explain that to you sometime.” Chad returns and talks about stepping up security. It won’t be for long. By the time he’s done, there’ll be nothing left of the Kiriakis fortune, or Deimos. Later, once they’re alone, Abigail gets into a slinky number and makes out with her man.

Deimos meets his goon in the alley to discuss everything that Chad and Gabi discussed while locked up. The goon says he did and heard Chad’s in love with both women. This pleases Deimos.

At the park, Nicole continues to flash back to Brady vowing that she’ll never be alone, parenting. Brady returns and they share a tender moment.

Lucas finds Justin at the square. Lucas has dinner for Adrienne and learns that Justin returned to Adrienne’s suite to get his phone and brought her to Janet’s Boutique to get smaller dresses since she’s lost weight. Lucas accuses him of jockeying for a position. Adrienne appears looking glamorous and feeling wonderful. Her doctor calls. The tumor has shrunk, but not enough to avoid the mastectomy. She looks shaken.

Ciara finally opens up about her feelings…