Days Recap: Deimos goes crazy after Nicole tells him to get lost

Monday March 13, 2017: Jennifer notices Chad and Gabi together, Abigail teaches Dario to dance, and Nicole yells at Deimos to leave her alone. 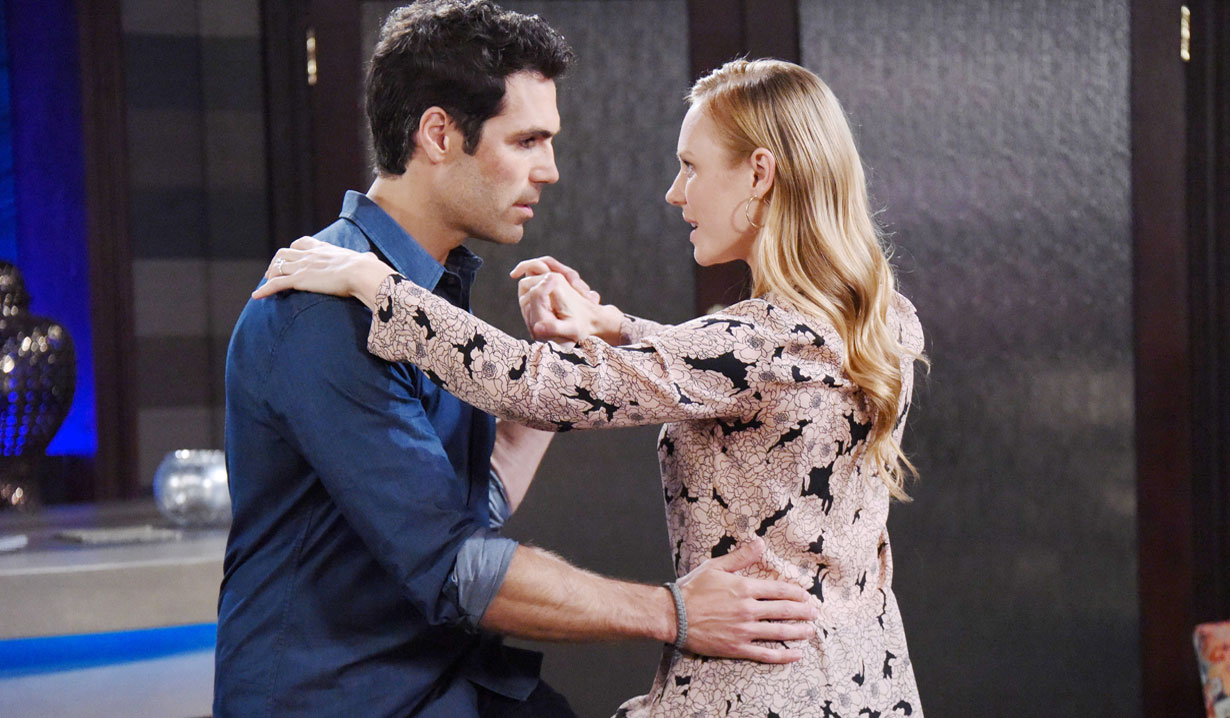 Chad and Abigail canoodle and kiss goodbye at home before she goes to finish working on the benefit.

At the farm, Eric writes another apology letter to Nicole and rips it up.

Deimos finds Brady and Nicole about to go on the run again at the hotel. He thinks she needs his help but she claims she doesn’t. He demands to know what’s going on between her and Brady. Nicole is annoyed with his question. Deimos offers to get her on a private plane and out of the country within the hour but she will never go anywhere with him. She trusts Brady. Deimos asks him to give them space so he goes outside and Deimos says he never meant to hurt her. He tells her he’s not a threat to her and loves her unconditionally but Nicole still can’t allow him near her daughter. She doesn’t love him anymore. Brady returns and Deimos says if that’s true, he has no reason to protect her. They leave and he smashes up the place in anger.

Related: Deconstructing DOOL: A slow week in Salem with characters many dislike

News: Keep on top of the newest scoops from B&B, Days, GH, and Y&R

Marlena calls Eric from the hospital and asks him to go to Salem tonight, saying there’s somebody there who could use his help. Eric arrives later and Marlena points out a kid, Jason Courtman, who was involved in a DUI car accident. Eric’s pissed but Marlena knows that man is experiencing something Eric knows about. He feels manipulated and pulls a face, making Marlena giggle. She remembers that face from when he was a boy and she asked him to do the right thing. He sighs and goes to Jason and tells his story. The man swears he’ll never drink again. He asks if Eric always comes to the hospital with his story, hoping for some good to come out of it. Marlena interrupts after learning the other person involved is going to be fine. Jason cries in relief and Eric comforts him.

Chad meets Gabi at the square. He has a gift for Thomas – a baseball glove. He thanks her for the belly dancing performance, saying it helped clear the deal. They reminisce about high school and “flash back” to when she gave him baseball lessons the first time he arrived at Salem high. They laugh and flash back some more to him learning she could pitch better than him. Jennifer watches as Gabi offers to teach Thomas when the time is right. Gabi goes and Jennifer stops Chad and notices how comfortable he is with Gabi. She says it looks like there are feelings there. Chad admits it’s true. Jenn demands he talk to Abby about that and stay away from Gabi.

Abby arrives at TBD to discuss details for tomorrow’s benefit with Dario. He’s mesmerized by her beauty. They discuss supporting Salem high’s athletic program and she gives him tango lessons. In the middle, Abigail sees Chad as she dances, instead of Dario. They stop and share a moment. Later, Abigail goes and Gabi arrives. She notes her brother is quiet. He admits he shouldn’t have offered to help Abigail with the benefit. He can’t get her out of his mind. She gets it. “When someone is emotionally unavailable you’re out of luck.”

Marlena takes Eric to the pub and tells him that sharing his struggle is a gift. He can help people put their lives back together.

Eric meets Jennifer in the square. She was glad to hear from him. He shares that he’s taking the job at the Horton Center. Jennifer’s so happy she jumps into his arms, promising he won’t regret it. He almost smiles and goes. Marlena turns up later and they are overwhelmed by Eric’s return home.

Back at the farm, Eric writes one more letter to Nicole, telling her he’s returning home. He places it in the wooden box.

Back at home, Abigail thinks it’s a little early to be thinking about Thomas playing baseball, when she opens his gift. She and Chad discuss Deimos kidnapping him and Gabi and Abby asks if he wants to continue provoking Deimos.

Days Recap: Adrienne gets word that...