Friday March 10, 2017: Kate and Eddie argue over him sending her gifts, Joey learns he has a half-brother, and Chloe demands Deimos get Holly back for her. 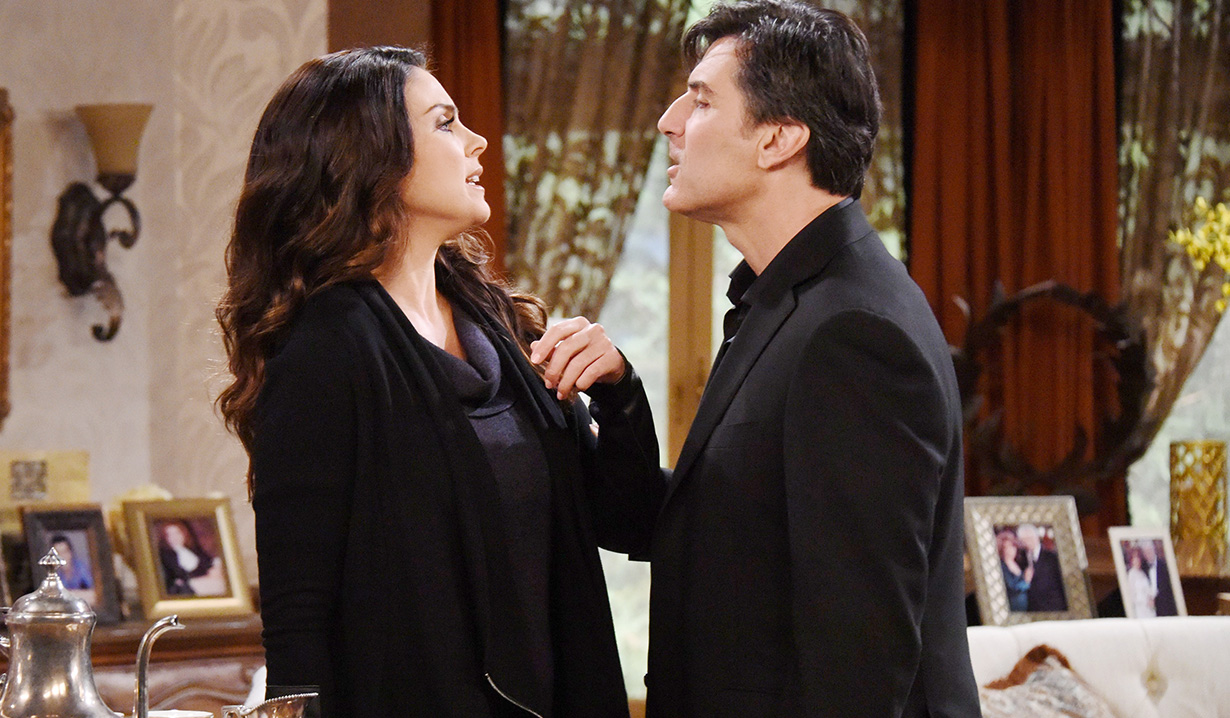 Steve fusses over Kayla at the pub, worried she’s not okay after the attempted murder. Kayla reminds him that Hal didn’t hurt her, thanks to him. They discuss Raymond having proof that Steve and Ava’s son is alive. He’s close to Joey’s age. They decide to tell Joey together but aren’t sure how to broach the subject. Steve tries out an example, pretending to tell Joey, just as Joey walks up and hears. He questions them and Steve admits yes, he has a half-brother named Tripp Dalton. They share details and Joey worries that Tripp will find out he killed Ava. Steve looks around, hoping nobody has heard. Joe goes and Steve worries what this new drama will do to them. Kayla admits he’s made her life complicated but she vowed she’d love him unconditionally. “Come rain or come shine,” Steve says, making them both crack up.

Kate arrives at Rafe’s to return a gift to Eddie that he sent her. He asks if she’s a little curious about what’s inside. She’s not. He opens it, showing her that it’s a charm bracelet with small charms representing her kids and grandkids. She smiles, despite herself. He places it on her wrist, telling her she can keep them close.

He can tell her pulse is beating faster and she says there must be something wrong with her. Feeling vulnerable, Kate tells him this isn’t going to happen. She doesn’t trust him. Eddie’s a patient man. Kate promises to have him arrested for stalking if he keeps sending her gifts. Ed says fine. He will keep buying her gifts but he’ll hold on to them until she sees the light.

At the Kiriakis mansion, Deimos yells at someone over the phone about finding Nicole and Holly. Chloe arrives and wants her kid. Deimos snipes at her, asking how she can live with herself after what she did to Nicole. Chloe rants about Nicole falling for a monster. Deimos laughs, “You stole your best friend’s baby so let’s be honest here. Who is the monster?” This goes on for a while, ending with the two screeching at one another. Deimos grabs her and tells her Holly’s not her baby and there’s nothing he won’t do to ensure she stays with her mother. Maggie enters and yells at Deimos to take his hands off of Chloe. Deimos goes and Chloe cries that she’s trying to find Nicole and Holly. Maggie says Deimos has no idea where Nicole is. Maggie sides with Nicole, thinking Chloe pushed Nicole to desperate measures by getting that restraining order against her. They may never see Nicole or her grandchild again! Chloe goes and Deimos returns. He and Maggie have it out briefly about Chloe and then Deimos talks about his love for Nicole and laments what he could have had. Once Maggie’s gone, Deimos gets a call and runs out.

News: Kate Hudson to Ellen, and John Goodman on The Talk

Exclusive: As The World Turns vet to Days of our Lives

Brady arrives to Nicole’s safe house with groceries. He tells her the couple who stole from her have left the hotel. Nicole feels stupid. Brady calls her desperate and alone and asks what comes next. She can’t run forever. Nicole disagrees. She sobs that Daniel is gone and Holly’s all she has. Brady reminds her she has him. He’ll go wherever she goes. She holds his hand, thankful but worried Chloe and Deimos will know he’s with her. She talks about wanting to be with someone who will put her and her baby first. While she’s taking care of the kid, Brady looks at her longingly. They pack and open the door to leave when they find Deimos standing there.

Chloe goes for a drink at TBD and talks to Eddie all about the situation with Nicole kidnapping Holly and Deimos’ connection. She can’t wait for the day Deimos gets what’s coming to him. “I’ll drink to that,” Eddie says. They bond over hating Deimos. Ed offers to help get her baby home, saying he’d love to stick it to Kiriakis.