Days Recap: Nicole goes on the run with Holly

Thursday March 2, 2017: Paul tries to reason with Sonny, Nicole finds a place to stay with Holly, and Brady and Deimos realize Nicole has kidnapped her kid. 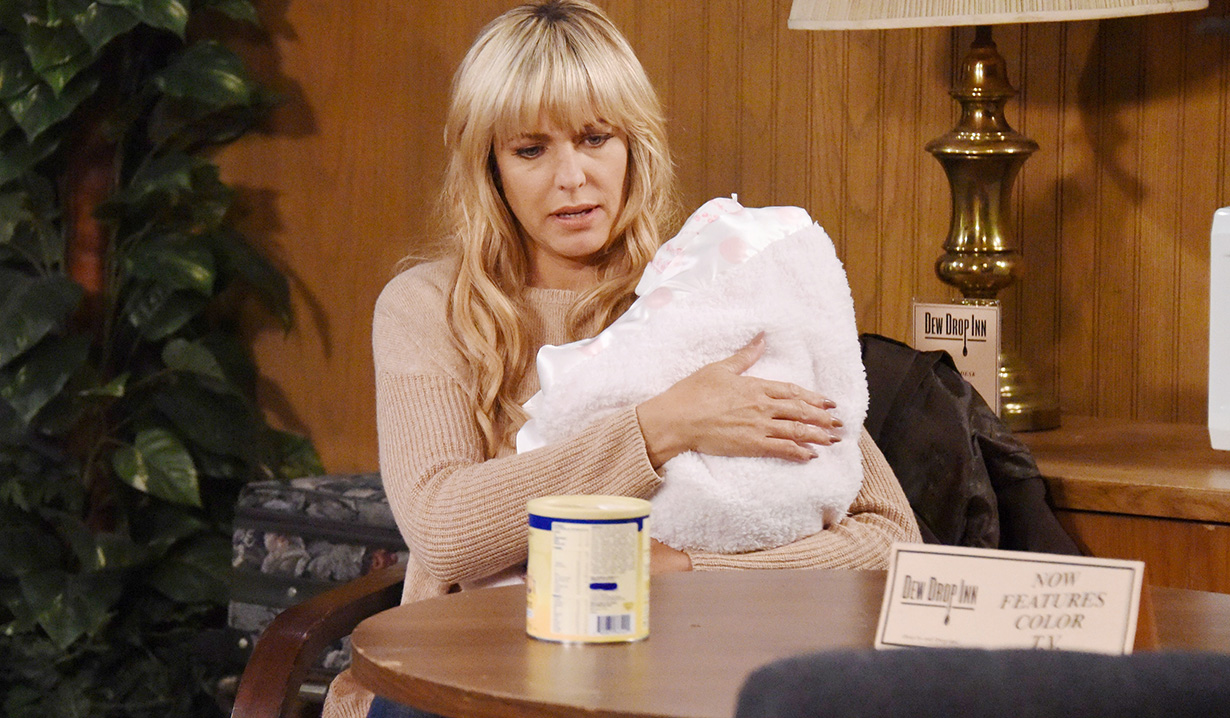 At the DiMera mansion, Chad flashes to kissing Gabi. Abigail appears and Chad talks to her about doing what’s best for their family by disarming Deimos, not retaliating. He knows his Achilles heel. Chad saw photos in Deimos’ safe of artifacts, or antiquities. He saw an inventory of these antiquities he’s planning on stealing or ones he has stolen. Chad needs to talk to Gabi about this since she was there when he found them. Abigail doesn’t look happy. The meat locker is brought up and Chad apologizes for kissing Gabi again. Abigail’s uncomfortable and asks if they can stop talking about it. Chad beams. He really likes her. They share a tender moment and kiss. Later, Chad eats popcorn on the sofa as Abigail passionately talks about some program called Reading to Babies, and again brings up Gabi and how much Abigail trusts Chad’s devotion to her. They make out.

Brady’s glad to see Sonny at the pub for the first time after his kidnapping. Sonny wants to take control of Titan away from Deimos and asks for Brady’s help. Brady wants him to take time to consider this. He agrees Deimos is out of control, but he’s suggesting mutiny. Brady’s distracted with thoughts of Nicole and heads out to find her. Paul arrives and Sonny’s annoyed that Brady needs time to consider having Sonny take over. Paul tries to reason with him and asks him to remain calm, the way he did when faced with an adversary in baseball in the past. Sonny won’t do anything stupid. Paul doesn’t trust that. Sonny barks out, “Why is this any of your business?” Paul cares for him.

Deimos returns to Chloe’s room at the Inn and finds her unconscious, pissed, he calls Nicole and leaves a message, telling her she messed up big time.

Nicole gets a room at some rooming house and pays with cash. She won’t remove her sunglasses and when the owner becomes curious, she tells him that she’s on the run from her abusive husband. Once he’s gone, the baby bawls and Nicole attempts to give her a bottle.

At the square, Gabi watches JJ with Lani until Lani goes to take a call. JJ approaches and she admits it’s hard to see him dating the woman he cheated on her with. JJ becomes defensive and Gabi’s snarky. She’s still angry but admits she does want him to be happy. When he asks if she’s seeing someone, she doesn’t want to discuss it. Things get heated and she walks away.

Brady arrives at Chloe’s room. The door is wide open and Deimos is standing over Chloe’s unconscious body. He immediately accuses Deimos of wrongdoing. Instead of admitting he didn’t take the kid, Deimos lies and says she’s somewhere safe. Deimos’ goon appears and says the car is ready for whenever the baby is. Brady’s shocked and realizes Nicole kidnapped Holly. He tells Deimos to go, as Chloe comes to. Chloe demands to know where Holly is and Brady says Nicole took her. He will get her back. He asks Chloe to let him do his thing and delay calling the cops. Chloe agrees to it but as soon as Brady goes, Chloe calls the cops.

Paul finds Lani and JJ eating at the square. He approaches, looking glum. He tells JJ that Sonny’s worked out about Deimos and he can’t get him to back off. He asks if they’re closer to arresting Deimos but they’re not so JJ agrees to try to get Sonny to let them take care of Deimos. Paul thanks them and goes and Lani admits she’s reconsidering moving back to Florida. A kiss is interrupted by an Amber Alert.

Nicole watches TV in her room when an Amber Alert comes on searching for Holly. She gasps. They’re already after her! She starts to panic.

News: Lucas Adams to Days in a surprising role

Gabi arrives at the pub to see Sonny. They discuss how much it sucks being kidnapped and he tells her he plans to end the war permanently.

JJ and Lani arrive at Salem Inn, where they take Chloe’s statement. JJ gets a call from someone and learns Nicole was seen on the security camera. They head out.

At the Kiriakis mansion, Brady and Deimos discuss the kidnapping. Deimos worries Nic will never see her kid again once she’s caught.