Days Recap: Nicole takes desperate measures to get her daughter Holly back

Wednesday March 1, 2017: Abigail gets a job, Anne makes a move on Lucas, and Chloe's in trouble. 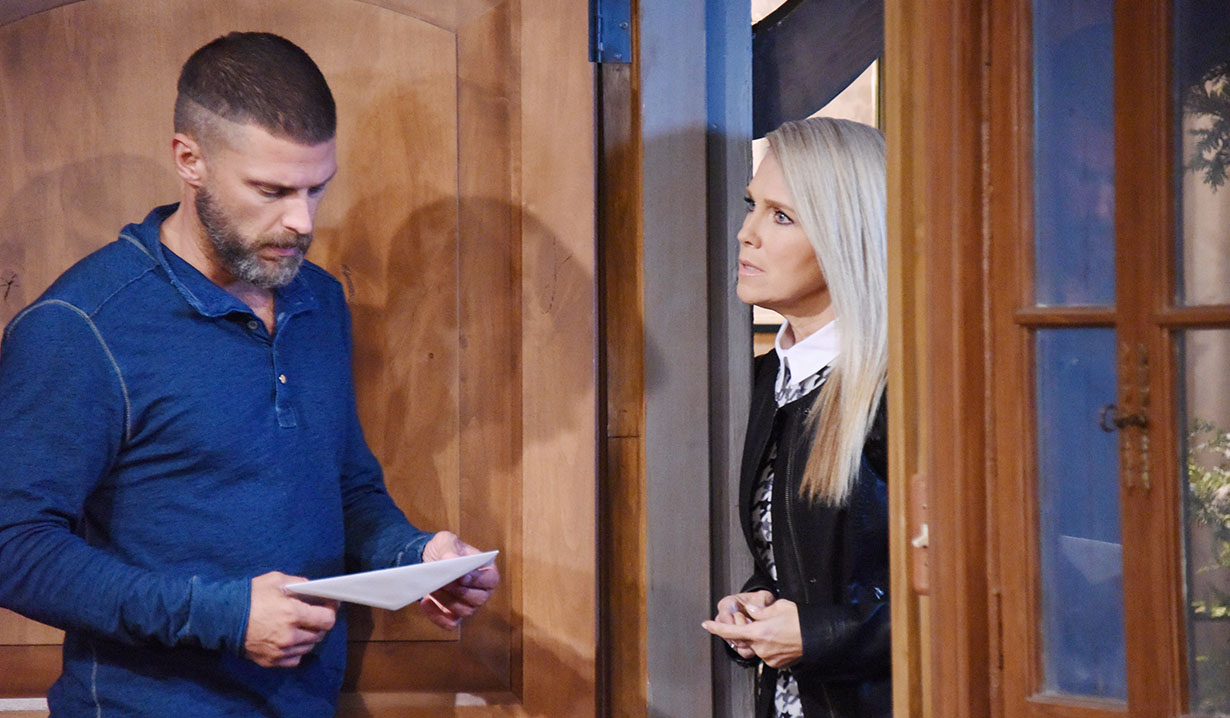 Gabi meets Abigail at TBD. Abby says she knows what happened in the meat locker. Gabi scrambles and insists it was the hypothermia. Abigail says she doesn’t need to apologize. She’s glad Chad wasn’t alone. They hold hands as Gabi promises she’d never stand in the way of her friend’s happiness.

At the square, Chad thanks Dario for saving his life. Unsmiling, Dario shakes Chad’s hand and says not to mention it. Chad asks to settle their differences but Dario doesn’t think that’s in the cards. Deimos approaches and Dario goes at him. Chad stops him from laying the smack down. They exchange words and Deimos goes. Dario wants to kill him.

Anne arrives to say goodbye to Chloe in her suite at Salem Inn. Anne says she’s surprised the judge gave her custody of the kid, not Nicole. Chloe gets annoyed so Anne changes gears and sniffs around for information about Lucas. Chloe grins. She can see her friend is hot for her ex-husband. Anne’s flustered but admits it’s true. Chloe coaches her pal that he likes oatmeal raisin cookies. She asks, “Boxers or briefs?” Chloe laughs but won’t answer that one. She wishes Anne luck and they hug goodbye.

In the park, Brady tries to get Nicole to do something in order to take her mind off of Holy. All that does is make Nicole whine and cry about being denied her kid. Brady hugs her and reiterates he’ll be there for her. Nicole starts talking about what ifs concerning Daniel’s death so Brady realizes it’s time she knew Eric’s been released from prison. Nic has a meltdown. She goes over the events leading up to Eric drinking and killing Daniel. She snipes that she’s grateful she never has to see his face again. Once she’s calm, Nic decides to soothe herself with some clam chowdah at the pub.

Jennifer arrives at the farm to give Eric a letter she hopes will convince him to go home. He reads it. It’s about a job at the Horton Center. He growls that he’s not going back to Salem. Jenn won’t give up. Daniel wouldn’t want him to act cowardly and hide out for the rest of his life. Eric can’t help but think about Nicole. He cries that he can’t face her but Jennifer says he can with dignity and courage. He needs to forgive himself. She goes and he writes a letter to Nicole, vowing to hang on to his shame and regret, forever. He puts it in the wooden box, along with several others.

News: Eileen Davidson’s new movie based on her books which tell a story about a soap star turned amateur sleuth

At Rafe’s, Gabi and Dario share a tub of ice cream, drowning in their sorrows over unrequited love. Gabi asks who he’s into and Dario reluctantly admits it’s Abigail.

At the DiMera mansion, Abigail hears Chad on a call with his publicist Kevin, who quits, saying he can’t fix the DiMera name. Abigail reminds him she’s done PR and can help him by promoting the positive. She makes a quick call to an old friend and starts things in motion. Chad’s impressed. He offers her a job.

Anne spritzes herself with some perfume before her meeting with Lucas at TBD. Anne gushes about how much it’s meant to her that he got her this job. She gives him some cookies to show her gratitude and he’s shocked. “These are my favorite!” he tells her, delighted. How did she know? Anne shrugs and grins. They discuss a romance-adventure book Anne’s reading where a couple does skydiving together. Lucas says he’s had a hundred jobs and he can take her up. Anne looks exhilarated. She gets into his lap and explains that they’d be free-falling into a sea of ecstasy and kisses him. Lucas shoves her and yells, “Anne, please, what do you think you’re doing?” Anne apologizes, mortified. Lucas brushes it off, hoping he didn’t send mixed messages. He reminds her he’s in love with Adrienne. He goes to get a drink and Anne curses herself for the ‘smooth move’ and muses that he’s just not ready for her yet.

Just in: Soaps.com’s February comings and goings with a look into March

At the mansion, Deimos meets Brady and says he’s going out of town on business for a while. He’ll be in touch. Brady doesn’t seem to care and takes off, leaving Deimos to call someone and tell them it’s ‘go time’.

Chloe opens the door and calls the concierge from her hotel. As she does, Nicole enters her room, knocks Chloe out with chloroform and takes Holly.

Brady waits for Nicole at the pub and when she doesn’t show, he worries.

Sonny lets Brady know what his next move will be.