Days Recap: Jade gets shocking news about her father

Tueday February 28, 2017:  Jade receives news about her father, Sonny wants to take over Titan, and Chloe serves Nicole with papers. 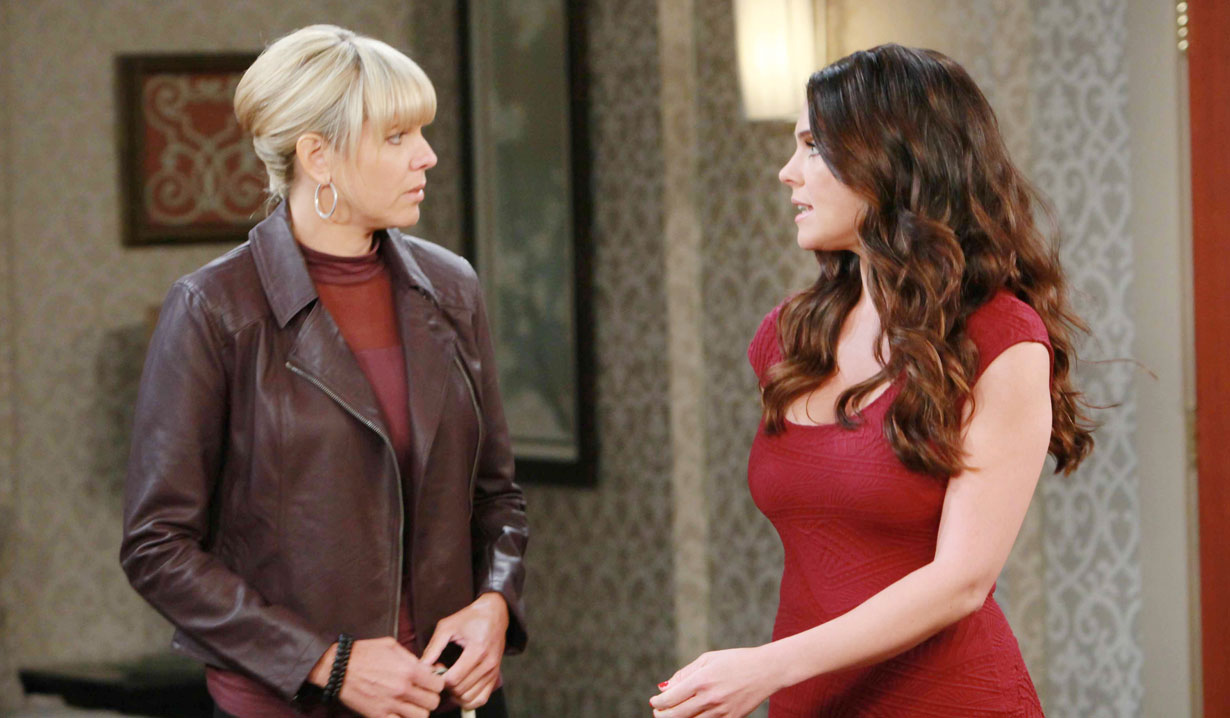 Steve visits Kayla at the hospital and gives her a yellow rose. He suggests they find an empty bed, but Kayla has to return to work when a patient’s monitors go off. She finds out the patient is Jade’s father, who is trying to disconnect himself from the machines to check out. Kayla looks at his chart and tells him that he’s not going anywhere.

Hope arrives at Rafe’s house for their date. Rafe surprises her with plans to make her dinner at home. They move into the kitchen and make fresh pasta. Things turn playful and they throw flour at one another and then share a kiss. Later, Rafe draws Hope a bubble bath so she can clean up. She points out there is room for two. Before Rafe can undress, Hope grabs him and pulls him in, soaking his clothes. After they dry off the two head to the bedroom and have sex.

Victor meets Sonny at TBD. Sonny wants to take over the family business, but Victor decides to stick with Deimos for now. However, Victor agrees to draw up papers to make it official that Sonny will take over should Deimos become incapacitated.

At the Kiriakis mansion, Deimos asks Brady if he’s in love with Nicole. Brady tells him only as a friend, but Deimos doesn’t believe him. Later, Sonny returns home and confronts Deimos about Titan. Sonny says Deimos is not fit to run things. Deimos doesn’t care what Sonny thinks and tells him to pack up and leave if he doesn’t like how he’s running things. Sonny refuses and tells Deimos he will resign from Titan. After Sonny leaves, Victor returns home and warns Deimos that Sonny is not happy with him. Deimos is more concerned about getting Nicole back. He knows the only way to get Nicole back is to help her get custody of Holly.

At the Salem Inn, Nicole is served a restraining order by Chloe to stay away from her and Holly. Nicole breaks down and swears she and Deimos are through, so Chloe doesn’t have to keep Holly. Chloe doesn’t trust Nicole because her history indicates she’ll probably be back with Deimos by next week. Chloe tells her to leave, but she refuses. Nicole knows Chloe still loves her, and she recounts their history together, including Chloe agreeing to be her surrogate. Nicole sobs that she gave her everything she dreamed of and then took it away, which is cruel. Nicole begs her to give her back her baby, but Chloe refuses and tells her again to leave or she’ll call the police. Nicole leaves in tears.

Joey and Jade are studying at their apartment when Jade gets a call from Kayla who informs her that her father is in the hospital and it is serious.

Jade and Joey arrive at the hospital. Kayla tells Jade that her father’s liver is barely functioning due to cirrhosis and that he needs a transplant. Kayla explains that her mom left him two weeks ago, and her brother has left the country, so she’s the only family they could find. Jade and Joey go in to see Hal. He assumes she has heard the news, and explains that his best shot is a transplant from a relative. He asks if she’d take the test to see if she’s a match. Jade responds, “After what you did to me? Hell no!” She storms out of the room and Joey follows her. In the hall, Jade asks Kayla about the test and how the donation works. Kayla explains the procedure.

Brady runs into Nicole in Horton Square and asks her what has happened. Nicole tells him about the restraining order. Brady holds her and tells her that he’ll always be here for her. He also believes in time Chloe will come to her senses and return Holly.

Sonny meets Steve and Paul in the park and asks them to keep a close eye on Deimos for him and report to him if he so much as spits in public. Steve agrees, and then leaves to return to the hospital. Paul and Sonny share a quick kiss, and Paul warns Sonny that going head to head with Deimos could be a mistake. Sonny refuses to let Deimos ruin Titan.

Steve returns to the hospital where he and Kayla tell Joey he needs to support Jade no matter what she decides to do. Joey sees Jade go into her father Hal’s room. Hal assumes Jade isn’t going to help him. She says she will take the test and if she’s a match then she will donate part of her liver to him. He thanks her and calls her the best daughter he could ever have.