Days Recap: Brady vows to support Nicole, and Deimos gets an eyeful

Monday January 30, 2017: Chad and Gabi discuss his marriage, JJ gets a new partner on the case, and Deimos makes a move to help Nicole. 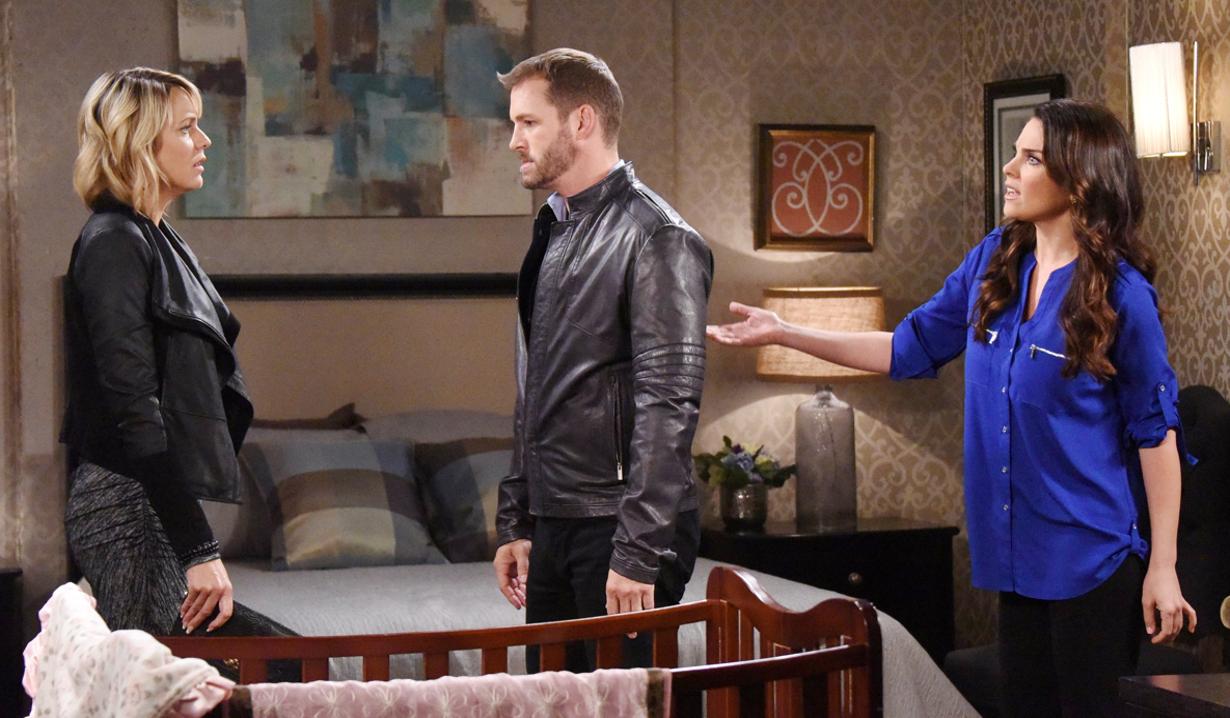 Chad calls Abby from the square to check in, and Gabi arrives in time to hear him offer to pick up champagne for later. Chad explains to Gabi that he had to make a decision, and told Abigail they’d be a married couple again. Gabi thinks he looks happy. Chad takes Gabi inside Club TBD to ensure she’s okay. Gabi insists that she is glad his marriage is working out. Outside, Abe and Valerie run into Theo and chat until Theo admits he has a problem with a class in school. Val invites him over for dinner, and after she’ll help him. She goes, and Abe questions Theo about getting along with Val. In a hospital room, Deimos advises Dario’s hitman to do exactly what he’s told. He is to call Roman and say he doesn’t want to press charges against Nicole Walker and make sure they know he won’t testify if they go ahead. He threatens the man’s family if he fails to cooperate.

At the station, Jennifer asks JJ about Nicole. JJ says she had a bail hearing, and Lt. Raines calls him away. Brady appears. He tells Jenn he has to get to Nicole and Chloe before they kill each other. In Raines’ office, he and JJ debate how to proceed on an important case. Lani appears – she’s joining JJ on the assignment. Raines orders JJ to get her up to speed. Lani offers to turn down the assignment, but JJ is fine with it. JJ updates her on Eduardo and Dario being under suspicion. They worry about whether Gabi knows anything. Lani warns she could be charged as an accessory. Meanwhile, Jenn queries Raines about whether Dario put out the hit on Deimos. Raines has no comment.

Nicole is at Chloe’s door and advises she is there to take Holly home with her. They bicker. Nicole informs her friend she will win the custody case. Chloe disagrees, and restates her issue with Nicole taking the baby to live with Deimos, whom she calls a monster. Nic vows to camp out there until she lets her in. Chloe relents. Nicole looks at Holly. They agree they want what’s best for her. Nicole talks about their friendship, and empathizes with Chloe having to let go of the girl. She will let Chloe be in Holly’s life unless she forces her to go to court. Chloe reminds Nicole she stabbed someone and adds that she knows Daniel wouldn’t want his daughter raised by a man like Deimos. Brady arrives as they argue. Holly cries and Chloe rushes over. Nicole wants to hold the baby. Brady feels it’s not unreasonable, but forces Nicole to leave before she does something to hurt her case. Once alone, Chloe flashes to hearing Deimos make a death threat. She phones Belle to tell her about Nicole’s visit. “We have to be ready.”

Val meets with Jennifer in the square and Valerie admits she’s still undecided about staying in Salem. Jenn feels Abe would like it if she did. They talk about Theo needing a mother figure and recall what a great mother Lexi was. Jenn wonders if Val ever found out who planted the bug in her purse. Val says it was someone who thought she was hiding something. What she is withholding is private and no one’s business. Jenn recalls when she kept a secret for her daughter; it’s okay to protect their loved ones. Jenn asks about Abe. Val cares a great deal for him and admits it’s getting serious. Nearby, Theo admits to Abe that he thought Val had another man, but he realized he was wrong. He heard her calling someone ‘sweetie’ on the phone, so what was he supposed to think? Theo thought it was weird. Later, Jennifer is approached by a waitress, (played by WWE’s Barbie Blanks (Kelly Kelly), who says her boyfriend works at the docks and has seen some strange things going on. Jenn pulls out her notepad.

In Club TBD, JJ and Lani are discussing his failed relationship with Gabi, when he spots her with Chad. He wonders if his sister knows they’re still hanging out. They defend themselves. Chad leaves for home. JJ apologizes to Gabi. When he gets coffee, Lani tells Gabi she feels for her. After, JJ tells Lani he thinks someone got to the hitman.

At the Kiriakis mansion, Brady assures Nicole that Holly will be with her, but she has to do this legally. Nic knows he’s right but cries about being separated from her little girl. She can’t understand what’s wrong with Chloe, and worries that she’ll run. Brady urges Nic to have faith. Nicole says Chloe is bonding with Holly; the longer they wait the harder it will be for everyone. Brady assures her they’ll win the fight. Nic is grateful she’s not alone in this. They embrace as Deimos enters.

While secretly running an errand in Salem, Eric runs into a familiar face.