Tuesday January 10, 2017: Anna shares her plans to kill Stefano with Marlena, Hattie does something desperate in order to keep Hope safe, and Chad and Abigail share a romantic dinner. 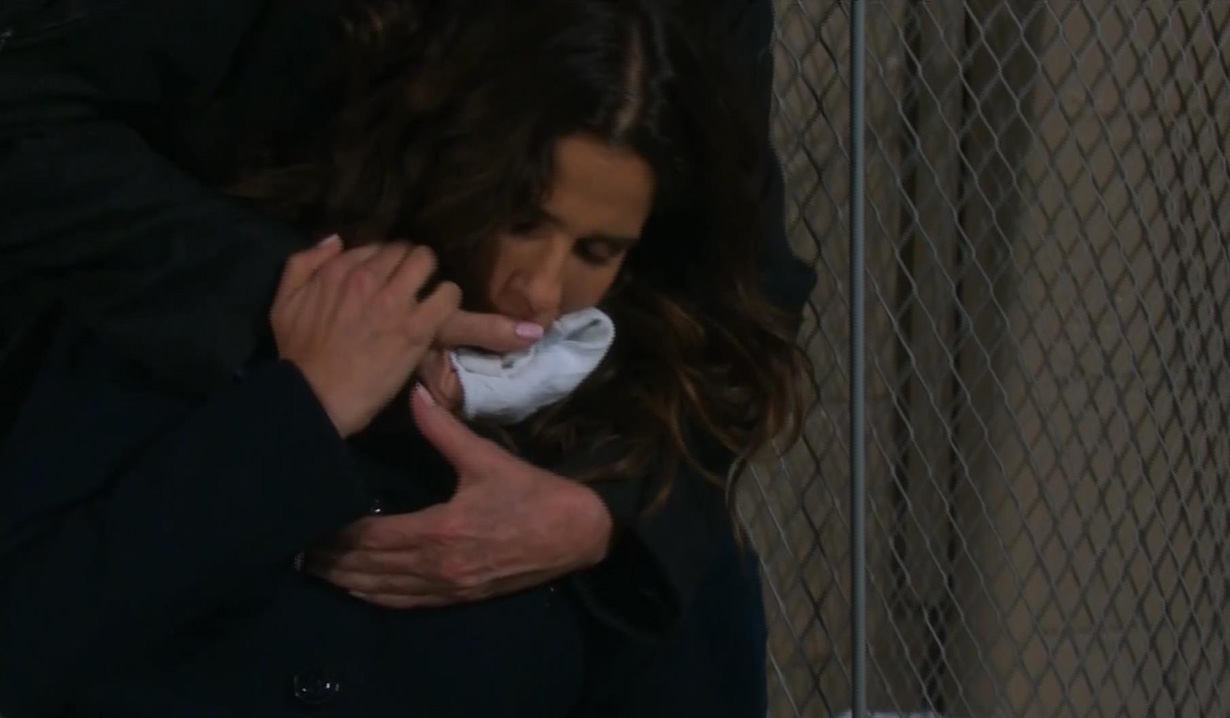 Abigail interrupts Chad working at the mansion to tell him she’d like to take Thomas to her mother’s. Chad grins at her. They can spend some time together. Abby goes and Andre appears to discuss the possibility that Stefano is alive. Chad hasn’t heard from him. He’d have told Andre…the same way Andre told him that his wife was alive. Andre chuckles, knowing Chad’s still angry. Andre admits he has come to care for Abby. She’s brave and loyal. Chad doesn’t want to talk to Andre about his wife, stating he’s the last person he’d go to for relationship advice. He goes and Andre mutters, “You think you know everything, don’t you. Just you wait little brother.”

Outside at the prison, Hattie reminds Hope that Coco and Sheila killed Chili and they want Hope dead, too. Hattie starts doing stretches. “I’m getting ready for the rumble,” she says. Hope talks about Alfie. She is going to get a list of all those who own that limited edition pocket watch. It’ll narrow down the list. Hattie cries, thinking of what Alfie did to her. She’d like to wring his neck. Hope learns that Alfie had an accent. Ortiz, the guard, approaches. It’s time for Hattie to start dinner. Hattie jokes that she’ll make something fancy but Ortiz says it’ll be swiss steak and instant mashed potatoes. Once she’s gone, Hope requests Ortiz’s phone. Ortiz hopes she’s calling to make a prison transfer. She goes and Hope makes a call overseas to find out who purchased the Chanteuse pocket watch. The man checks his logs and Hope makes a list, learning Andre DiMera is one of the buyers. She rips up the list and tosses it and someone comes up behind her and chloroforms her. Hope passes out. Hattie reveals herself. She sticks Hope into the dumpster and tells Chet, it’s ready to go. Hattie seduces him into looking the other way. “The things we do for love,” he says, and takes the dumpster, along with Hope, away. Later, the alarms sound. Coco and Sheila find Hattie. They heard a prisoner escaped. Alone, Hattie grins. “Bon Voyage, Hopie.”

In Prague, Steve and Rafe talk about time ticking. Hope’s in danger. They need to find Stefano. Meanwhile, Marlena runs into Anna DiMera in some dark alley. Anna tells her she’s still heartbroken over Tony’s death and since it’s Stefano’s fault Tony’s dead she’s there to find Stefano. She waves a gun around. “I want him dead!” Marlena says what Anna did was put Stefano on guard with her stunt at the cafe. Marlena questions why Anna’s talking as if Tony’s alive.  Anna clarifies, “Unfortunately all the wrong people have come back. And Tony’s not one of them.” She pulls out an urn with Tony’s ashes, then turns the gun to Marlena, vowing not to let the psychiatrist stop her. Marlena can see she hasn’t thought this out. Anna lowers her gun, shakily. Marlena blames her for losing Stefano today. a police officer, (Ivan Djurovik) appears and thinks they must have something to do with the shooting at the cafe. Paul intervenes. Everyone heads to the police station where Paul calls for Rafe and Steve to meet them. At the police station, Anna asks Officer Hasek, (Martin Harris) to give her Tony back. He’s confused. She points to the urn but the officer refuses. Steve and Rafe arrive and after hearing what happened, snipe at Anna for ruining their only lead. Marlena and Anna are arrested. Steve tells Paul there’s a reason Stefano came from underground. They just have to figure out why. Steve takes a call. The arms dealer they think is Stefano is making an arms deal.

Abigail drops off the baby at Jenn’s. Abby’s nervous, feeling like she’s always auditioning to Chad to show him she’s the same woman he married. Jennifer calls her even stronger. Abigail goes and Jennifer shows the kid around, telling him all about those family members in the photos he sees. Abby and Chad dine at TBD. The awkwardness turns to romance. Chad wants to get wine. They eat burgers and oysters. Abby talks about her new resolution to do things that make her uncomfortable. She knows he loved her once. He tells her he needs her to be herself, the woman he’d like to fall in love with again. She nods. They dance.

Hope fights for her life.

Those in Prague prepare for the big meeting.

Days Recap: Marlena runs into a...