Friday October 21, 2016: Nicole confesses to Deimos that Chloe's kid is his, and Paul's date upsets Sonny. 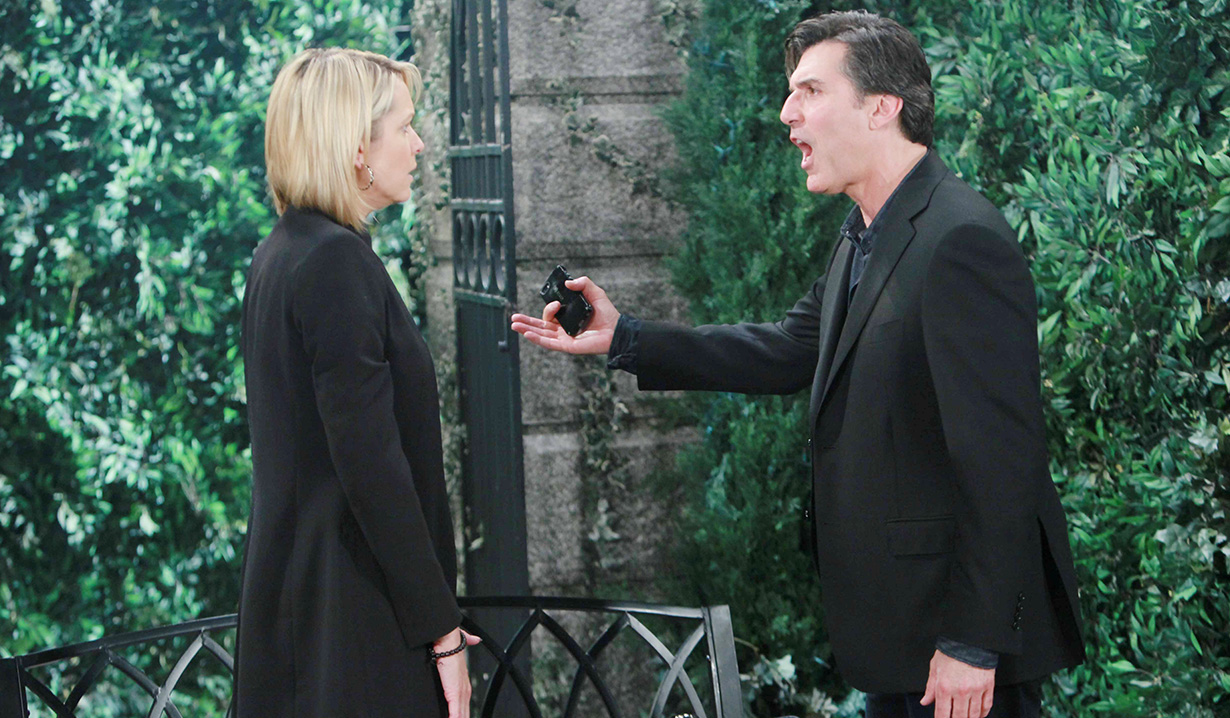 At the DiMera mansion, Chad and Lucas discuss Anne Milbauer staying over last night. Chad tells Lucas that he’s in a good place now and is ready to take care of Thomas on his own. Lucas agrees and suggests they delay discussing it with Jenn for now because of JJ’s coma.

Paul thinks of Sonny while he gets released from the hospital. Sonny arrives and offers to take him home but Paul’s meeting a friend at the pub. He lets Sonny tag along.

At the pier, Nicole confesses to Deimos that Chloe’s baby is his. Deimos calls it impossible but Nicole admits Chloe convinced the doctor that Deimos was a danger to her so he falsified the test. Deimos hugs Nicole, happily. He assumes she just found out and becomes angry when she reveals that she has known since August. “How can I ever trust you now?” He yells, disgusted. He wonders if she covered it all up with the sex. Nicole snaps, reminding him he’s not the poster child for doing the right thing. She throws poisoning Maggie in his face. Deimos starts throwing wooden crates around and screams that what she did was unforgivable. Nic didn’t set out to hurt him but this behavior is why Chloe was afraid of him. Nicole didn’t know him as well two months ago and hopes she hasn’t made a mistake telling him the truth. Deimos throws her kidnapping Syd in her face and says no kid would want her for a mother. Nicole hauls off and gives him a slap, yelling, “How dare you?” Deimos thought they were soulmates. How could he be so wrong? He leaves her sobbing. She calls Chloe, leaving a message about her betrayal, asking her to do what it takes to stay safe.

Spotlight on: Soap stars getting into the Halloween spirit

Julie arrives at the hospital. Jenn tells her that there’s no change with JJ. In JJ’s room, a nightmare wakes Gabi up and she begs JJ to come back to her. She made him a playlist as a present and puts it on, telling him it’s filled with Hendrix, Clapton, and BB King. She cries, begging him to wake up. Chad arrives with Arianna and finds Jenn and Julie. He hears JJ’s doing the same. Gabi comes out of JJ’s room and Jenn urges her to spend time with Ari. Chad and Gabi leave and Jenn and Julie visit JJ. Julie tries to keep Jenn’s spirits up but it’s no easy task.

Sonny and Paul have coffee at the pub and Paul talks about Sonny saving his life. Sonny’s humble. Paul asks why he found him. Sonny says it was a gut feeling. He asks to talk about the moment that they shared. Paul brushes it off, knowing Sonny doesn’t want anything to happen between them. Paul has accepted it and says it won’t happen again. Sonny wants Ari to be a nun for Halloween, making Paul puzzled. Paul makes jokes about Sonny wearing The Viper costume at the comic book convention. Sonny’s still humiliated about that. Sonny is about to tell Paul something when Derrick walks in. Sonny’s surprised to see him. Derrick says he and Paul ran into each other at the hospital. Sonny didn’t know they had bellhops at the hospital. Derrick laughs. He’s an administrative assistant. The guys take off, leaving Sonny upset.

Chad and Gabi dine at Mandalay, happy that the stores are all opened. Chad says even Ari noticed on the way over that there were people outside. When Gabi starts to get upset about JJ, Chad intervenes and tells Ari a story about a giraffe accountant. Things become light-hearted again. Lucas and Adrienne stroll up with Thomas and Adrienne takes both kids home.

In the park, Derrick notes that Sonny seemed upset that they had plans together. Paul says Sonny’s still grieving Will. It wouldn’t work out anyway. Derrick begs to disagree. Sonny deserves to be with somebody who doesn’t remind him of Will. Nearby, Demos gives his goon an envelope and tells him to find Chloe Lane. “Go easy on her. She’s pregnant with my baby.” He orders him to bring her back to Salem.

Adrienne heads into the pub alone, and finds Sonny. She says she and Lucas are moving into Salem Inn for now. He’s distant. She asks what’s up and he admits he thought there was something between him and Paul but he misread the situation.

Lucas arrives at the hospital and hugs Jennifer, offering support and to take her to an AA meeting. He convinces her that she needs to stay strong and she agrees. They return later and Jenn hears JJ telling Gabi he’s sorry.

Days Recap: Blanca's past returns as...

Days Recap: Aiden forces himself on...