Days Recap: Sonny reels when a bombshell is dropped on him

Tuesday September 20, 2016: The Kiriakis men argue about who should and shouldn't move into the mansion, Sonny has a bombshell dropped on him, and Chloe makes an important decision. 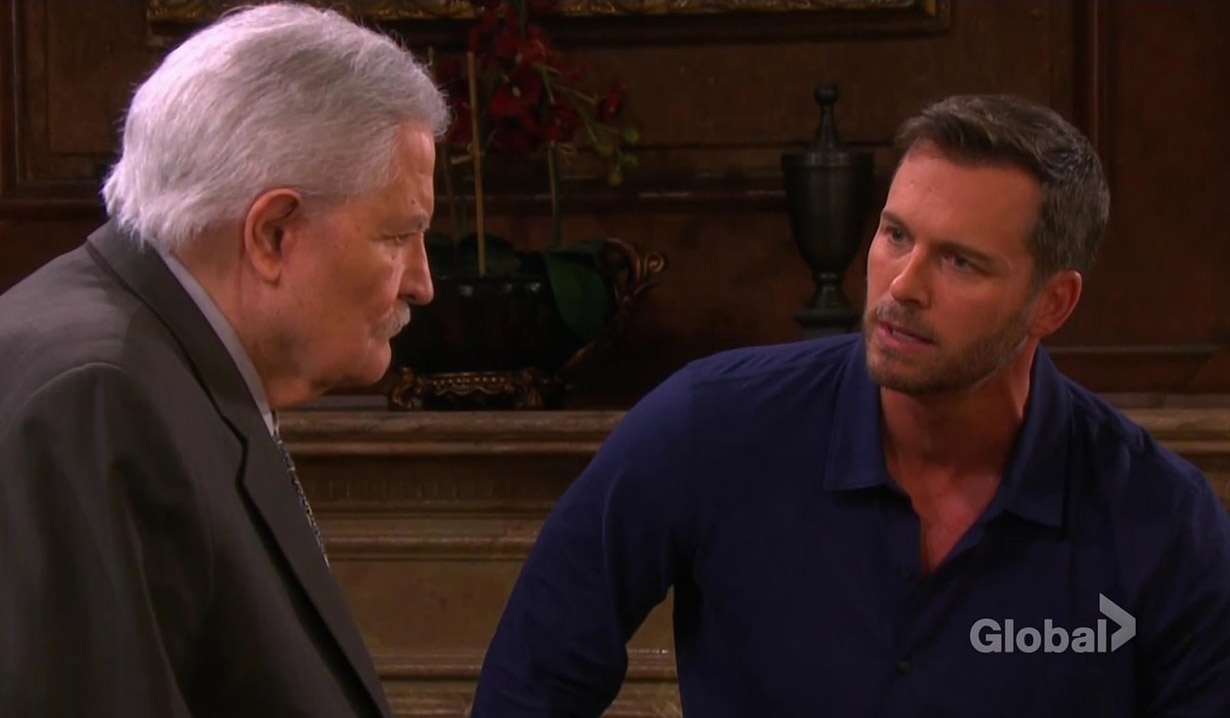 Eduardo eavesdrops on Dario at the square, who fills Deimos in on a call about Chloe’s OBGYN appointment. When they disconnect, Eduardo says he doesn’t think Dario should be working with Deimos. Dario scoffs that the reason is because Deimos stole the beautiful Ms. Roberts from him. Eduardo says that has nothing to do with this. He’d rather his son come work for him. Dario reminds him he does. Eddie can’t get into this now but he’ll be in touch.

At the Salem Inn, Chloe flashes to Deimos learning about her pregnancy. Nicole drops by and learns her friend is moving into the Kiriakis mansion. Shocked, she calls it a bad idea. How will she keep the paternity from Deimos? Nicole thinks she’s safer if she leaves Salem, calling this a trap. Chloe says it won’t look as though she and Philip are really together if she doesn’t. She asks Nic to move in too but Nicole again refuses. She says she’s afraid of making another mistake, she’s daunted by his intensity and she’s frightened of her track record. She still can’t trust Deimos. Chloe feels the baby kick and they bond over the moment.

A look back: Grey’s Anatomy season 12 recap and season 13 preview

At the Kiriakis mansion, Victor rants to Brady, Sonny and Deimos that if the deranged escapees checked into the same hotel, SPD still couldn’t find them. They need to band together to protect their family. Deimos wants Sonny and Justin to move back in but Sonny doesn’t want them in his business. Victor confesses that Clyde Weston tried to kill Sonny once. He won’t hesitate to do it again. Sonny’s mouth drops in shock and Justin’s pissed that he kept this from them. Victor tries to justify it. Philip arrives. Victor’s incensed to learn Deimos invited him and Chloe to live there. Philip points out that Maggie thinks it’s a swell idea. Victor snipes, “Does she know his concubine is part of the package?” Arguing ensues. Brady yells at everyone to shut up. He thinks a small piece of duct tape over Vic’s mouth would solve all their problems. They need to project a united front. Brady hates Deimos but he’s staying there for the sake of his son. If he can deal with Deimos, Vic can deal with Chloe. “We need to be men.” Later, Sonny and Justin leave the room. Sonny agrees to move in though Uncle Vic drives him mad. Sonny now refuses to hide from the man whose son murdered his husband. Back inside, Victor complains about Chloe. “She has the personality of a head of cabbage. But not as smart.” Deimos says she might be pregnant with his kid. Victor can’t believe it. “You, Brady, Philip, Daniel. Thank God Sonny’s gay.”

At the Martin House, Kate loads a gun and upon hearing a noise, turns and aims. Andre has silently appeared. Kate apologizes and puts the gun down. “Hell hath no fury like a redneck scorned,” he says, referring to Clyde.

Andre and Kate have dinner at the Brady’s pub. She receives a text from Chad, updating that he’s fine. Andre notes that she has taken Chad under her wing. He’s happy about that. He too wants to be there for Chad. Kate says if Tony had asked her, she would have had no issues saying yes. Andre grins. They chat about this at length until Eduardo arrives and introduces himself. He was sorry to hear about Kate’s run-in with Clyde. Andre goes to the bar while Kate and Eduardo catch up.

At the square, Nicole takes a call from Roman who couldn’t trace Xander’s call. Chloe’s sorry. Nic wishes her luck as she goes off to the Kiriakis mansion. Dario watches nearby and approaches Nicole, concerned for her safety. She says she has a bodyguard. He hopes she’ll call if she needs him. He goes.

Chloe arrives at the mansion and Deimos watches Philip quietly tell Chloe he’ll sleep on the pull-out sofa. Chloe grabs him in a kiss. Everyone piles into the living room again and Brady welcomes Chloe. Victor surprises the gang when he says he hopes Chloe’s very comfortable. Chloe goes up to her room and the menfolk drink to ‘La Famiglia’.

Orpheus, Clyde, and Xander make a move against Salemites.