Days of our Lives recap for Thursday September 8, 2016: Deimos and Victor have proof Kate's the Tatenapper, Theresa has a bachelorette party, Nicole and Brady get letters from Eric, and Kayla has surgery. 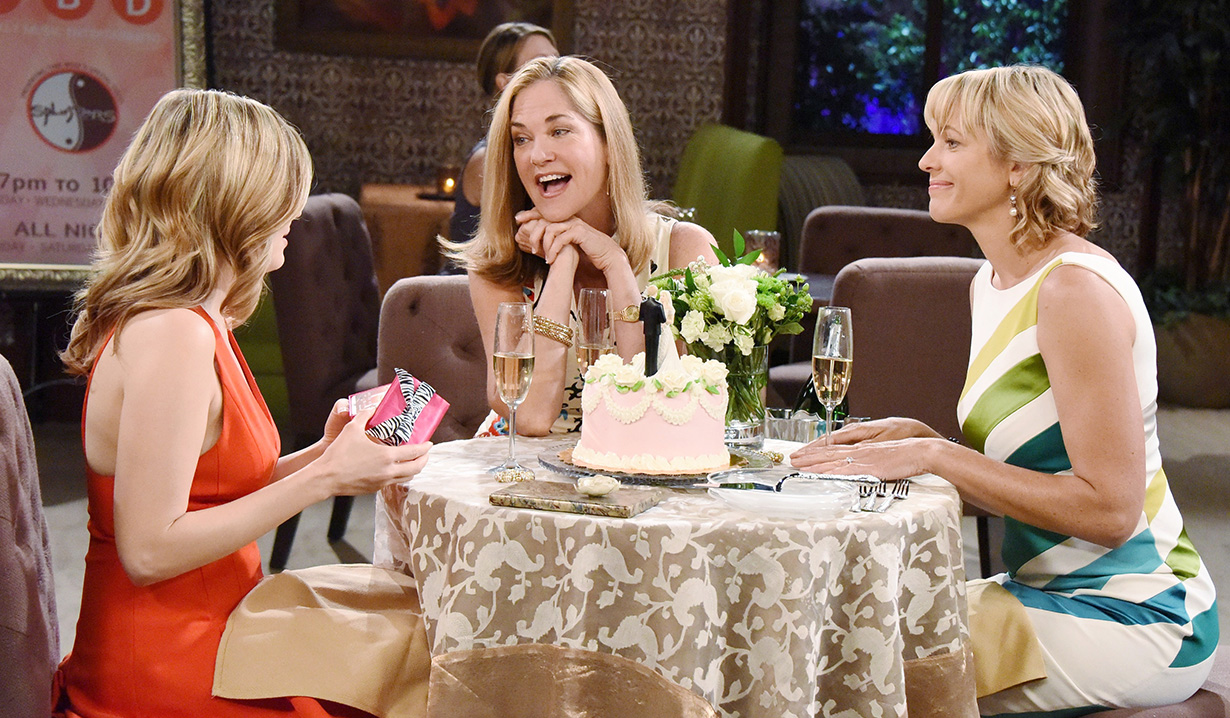 Steve and Kay meet Joey at the Brady’s pub. The kid wants to discuss his parents’ relationship. It’s uncomfortable. Kayla hates being the nag in the situation but does so because she feels helpless and constantly blindsided. Joey knows but quotes Dr. Evans who says the most important thing is that they love each other. Kay goes to get coffee and staggers upon her return. The men realize she has another headache. She collapses and Steve yells for Joe to call the hospital.

At the townhouse, Brady scoffs when Theresa shows him a little tuxedo for Tate to wear to their wedding. Does she really want a civil ceremony? She insists she wants privacy. They make-out and discuss the Tatenapping.

Eve finds Nicole at TBD, where she’s setting the scene for a bachelorette party. Nic’s glad she’s back and knows it’ll mean a lot to Theresa. Shame that Anne can’t make it. She helped out and had to get to Brooklyn to be with her sick mother. Eve goes to lure Theresa from her townhouse. In Dixon Correctional Facility, Clyde wonders how Milo ends up being a nickname for Orpheus. Orpheus doesn’t like his “homespun humor” though they agree destiny is on their side to take revenge against those who wronged them. He rants about Chad DiMera driving his son literally crazy and damns them all. “Look up smug in the dictionary and you’ll find a picture of Marlena Evans. Even when she’s smiling she looks like she smelled something bad.” Orpheus wants to wipe that smile off her face with ‘Agent Black’ watching. Clyde eggs him on and asks who else. He flashes to trying to murder Steve and Kayla and says there are many more. Later, Clyde brings Xander in to see Orpheus. He hates Salem as much as they do. His uncle is Victor Kiriakis, in fact. Xander snipes that he’s in there because of “the little bitch who says I attacked her, Theresa Donovan.”

In the park, Deimos and Victor accuse Kate of kidnapping Tate. “It’s time to pay the piper,” Victor quips. Kate denies it. They toy with her, knowing she was upset that the Kiriakis gravy train was coming to an end and she wanted them to neutralize each other. “Instead, you made us a united front. Against you,” Deimos says. Victor asks if she’s scared, because she should be! They let her know that they had help from Nicole and know she got the drugs used to knock Theresa out from Titus Drew. They know she has had it in for Theresa. Kate laughs at that, calling Theresa a mere annoyance. Victor reminds Kate she has had people put on death row and almost murdered others. When she turns to leave, they let her know they’ve proof. There’s a video of the transaction and Titus has agreed to testify in court. Kate narrows her eyes. She tells them she lived in the mansion for a while and it gave her time to find proof they’ve links to antiquities stolen from the old country and sold on the black market. She threatens to call Interpol. They threaten to tell Brady. Who knows what he’ll do to her? Kate proposes they find a fall guy.

Related: Martha Madison will be returning to Days

Eve arrives at the townhouse. Theresa and Brady are excited to see her. Eve tells her sister they’re painting the town red tonight. Theresa tries to beg off until Brady says he and Tate have a night planned of their own. After they leave, Brady calls the hotel to request champagne, then finds a letter from Eric from prison.

Breaking: Day of Days event returns to CityWalk in November 2016

Eve and Theresa arrive at TBD where Nicole’s waiting with champagne. Eve remembers when they hated each other. “Is this an act or something?” They laugh and insists they get along great now. Nicole says nobody has been good enough for Brady, not even her, but Theresa is. Theresa’s grateful. Talk turns to kids and Theresa thinks Parker’s lucky to have her. Nicole becomes upset and goes to get air. Theresa feels bad and wants to go after her but Eve stops her. Sometimes people just need to grieve. Outside, Brady finds Nicole crying, and hugs her. He knows how hard a wedding must be for her and tells her she doesn’t have to attend. She wants to but can’t stop thinking of Daniel. They laugh when the realize Daniel would be shocked at the upcoming wedding. They talk about their letters from Eric. Brady knows he’s trying to make amends. Nic got one, too. Brady asks if she can forgive him. She can’t, even if she wanted to. They head inside and there are hugs all around. Kayla’s admitted to the hospital with Steve and Joey at her side. The nurse whispers about getting the surgery on her hematoma by Dr. Powell and leaves them to worry. Joe blames himself. Later, Kay awakens to her family at her side.

Brady drops Theresa off at home and leaves.

Chad asks Belle to relocate to another country for her job.

Deimos and Victor team up and...