Deimos and Victor team up and identify the real Tatenapper

Days of our Lives recap for Wednesday September 7, 2016: Laura gets in Kate's face, Gabi and JJ are having relationship troubles, and Deimos and Victor find the real Tatenapper. 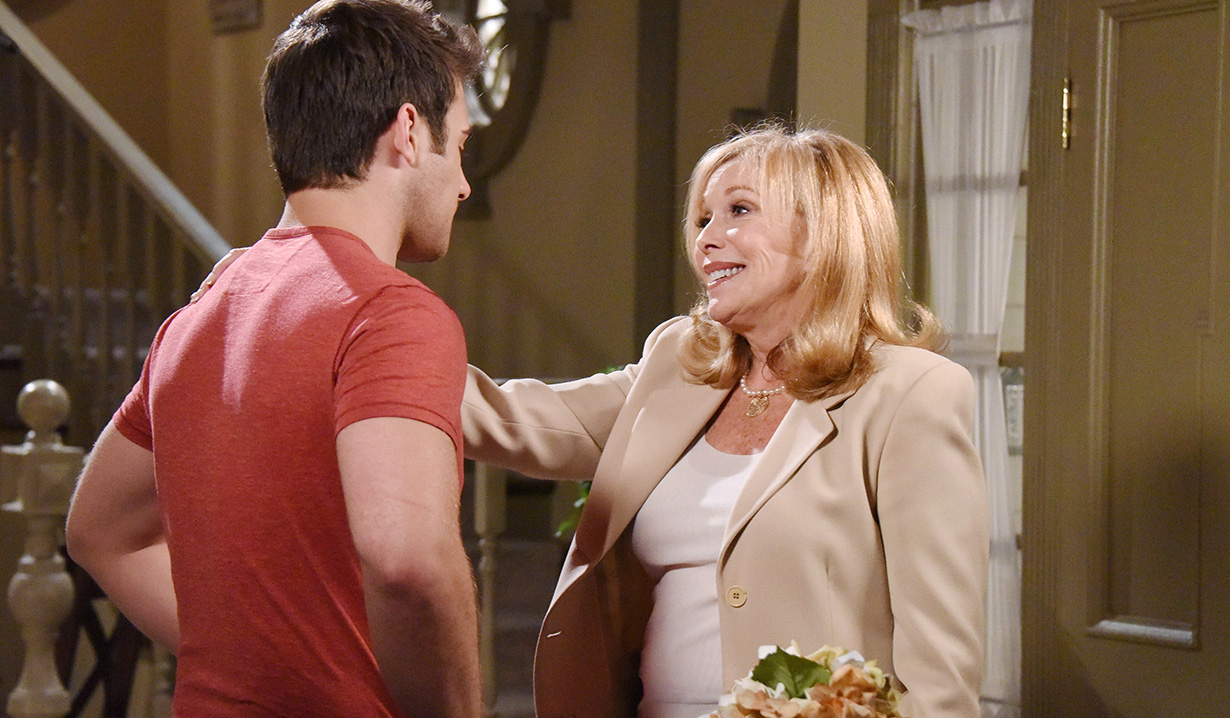 At the cemetery, Sonny tells Ari he’s home for good. He wants to be at the top of Gabi’s babysitting list. Gabi starts bitching about JJ not calling her while he has been looking into the plane crash in Miami.

JJ arrives home and hugs Julie. He mopes because Gabi’s angry that he only called once since he disappeared. Julie snaps that he should dump her but he feels Gabi’s right to be angry.

At the townhouse, Victor tells Maggie about Deimos’ suggestion they move into the east wing of the mansion. They agree this gesture is over the top. Deimos calls. He needs to see his brother – immediately. He appears minutes later. The men go off to talk, leaving the little woman home alone. Julie arrives and they discuss Deimos’ offer. Julie likes the idea of living with family, citing her own move into Jennifer’s. Maggie argues that it’s just Deimos. No Philip, Justin or Adrienne. Julie’s trying to give her some perspective. She hopes Deimos and Victor learn to love one another.

Kate arrives at the DiMera mansion. Chad lets her know Lucas and Adrienne have moved in to help out with Thomas. She’s glad to hear. Chad says DiMera Enterprises is in a shambles. He wants them all above-board and streamlined. He asks for her help. Laura interrupts. “Big mistake asking Kate Roberts for anything,” she sneers. Kate clarifies they’ve been close for years. “Ever since you married the old spider [Stefano], yourself?” Laura goes on and on and both Chad and Kate shut her down. Laura brings up Kate’s past as a prostitute and isn’t sure Chad wants her around his kid. She then bashes Chad, saying he was mislead about where Abby would get the best care, citing that Shady Pines is a dreadful place. She bursts out into tears and Kate scoffs at her for her insensitivity when she says if Abby wasn’t sent there, she’d still be with them. Laura thinks he’s on his way to becoming Stefano or Peter. Kate denies that’s even possible and Chad tears up and quietly says, “That’s not true.” He tells Kate he’ll be in touch and goes out for air. Once he’s gone, Kate flies off the handle. “You’re crazy as a loon. The apple doesn’t fall far from the tree.”

At the square, Gabi apologizes to Sonny for sniping at him about JJ. She isn’t sure JJ feels the same way about her as she does. Nearby, Deimos and Victor discuss the real Tatenapper and what to do about it. They go off to meet the person responsible.

Chad arrives at TBD and flashes back to Laura’s encounter. He finds JJ inside and hears that JJ found no trace of Abigail. It’s difficult to believe. They agree to start fresh with one another and JJ goes. Sonny appears. Chad invites him to come work for DiMera Enterprises. Sonny can’t. His uncle would go nuts. Chad says he’s going straight. “Not that you would know anything about going straight.” He grins and holds his hand up for a high five. Sonny grins and ignores Chad’s hand so Chad fills him in about his mom moving in with him. At Dixon Correctional Facility, Clyde heads into Orpheus’ cell. They’re roommates now. Clyde explains he has a little pull there and wants to gripe more about Salem together. Clyde admits he is consumed with hate. “Sounds familiar,” Orpheus agrees. They talk about settling old scores back in Salem.

JJ meets Gabi in the park. She’s on edge, shocked he’s back. JJ explains his head was in a terrible place, looking for his sister, which is why he didn’t call much. “Don’t I count for anything?” Gabi whines. She feels left out. JJ wants to fix this. He explains how he’s been feeling and insists he missed her. He’s not off the hook but she holds his hand as they go pick up Ari.

Chad returns home and calls Kate, apologetic about Laura’s visit. He wants to confirm she can help him turn the company around.

Back at the Horton home, Laura says goodbye to JJ. She’s leaving. She calls her assistant Diane to remind her to check in with Dr. Robinson since Abby’s body wasn’t recovered at the crash site. They can’t take her death at face value. She dashes off to the awaiting taxi.

Deimos finds Kate at the park. She tells him to keep on moving. She’s meeting someone. Victor appears. She asks what’s going on and Vic tells her they’ve unfinished business. They ask if she thought she could get away with it.

Eve gets Theresa for her bachelorette party.

Clyde strikes up a friendship with...

Kayla fights for her life and Eve...