Days of our Lives recap for Tuesday September 6, 2016:  Laura has big news about Abigail, Steve shares that he plans on getting therapy elsewhere, Theresa and Brady prepare to marry, and Marlena visits the prison. 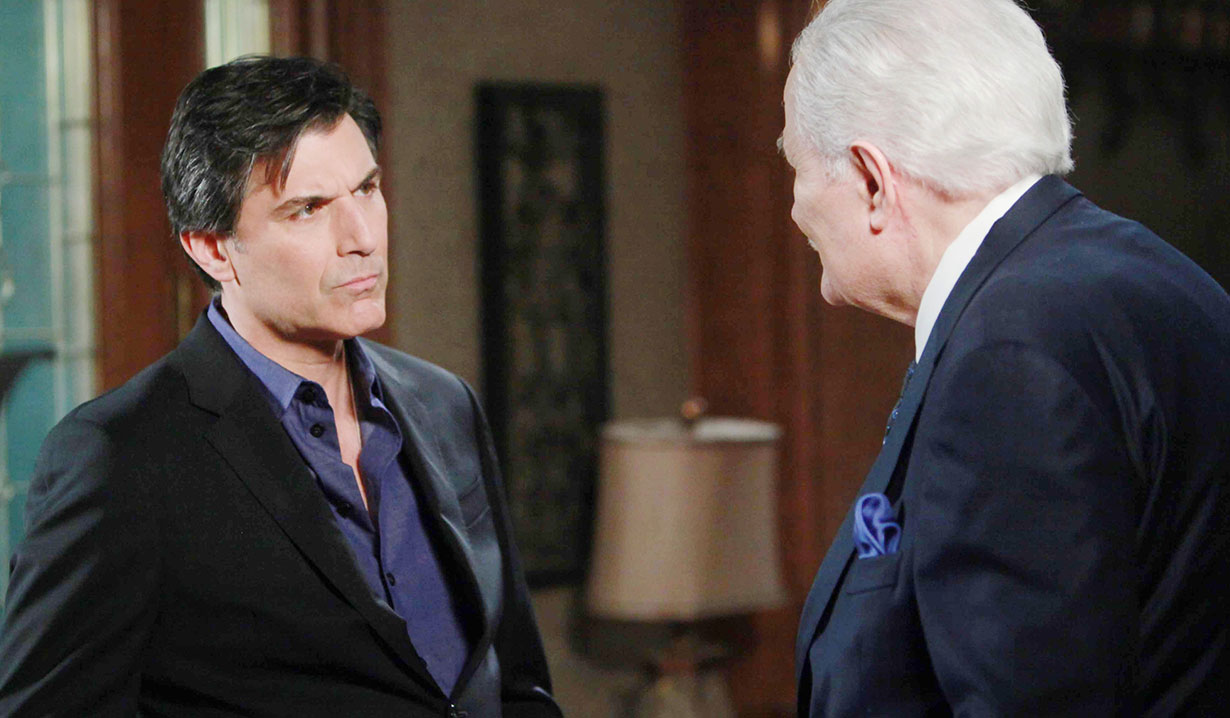 At the Kiriakis mansion, John hopes Victor will fix things with Brady before the wedding tomorrow. John goes and Deimos asks Victor and Maggie to move back into the mansion so she can recuperate in familiar surroundings. Victor looks stunned.

At the townhouse, Brady gets off a call, confirming he and Theresa can marry in a civil ceremony at City Hall today. Nicole arrives and Brady takes off. Theresa’s glad Nic’s there. She thinks of her as family.

Adrienne finds Steve at the hospital. She glares. He’s stood her up three times in a row! Steve apologizes and since she can’t stay mad, she hugs him. He admits he’s been having a ‘freakfest’ lately. He blew off therapy with Kayla. Adrienne conks him on the head, calling him ‘a big dummy’. It’s no fun living with a failed marriage. She urges him to face his fears and get Kayla back. “She’s your soul mate.”

At the DiMera mansion, Chad tells his son he won’t be living with Adrienne and Lucas long. He promises to visit. Andre appears, offering help. Chad asks what his angle is. Andre claims to have none.

News: Days is casting for the role of Hilary

Laura arrives at the Horton house and Jennifer opens up to her mother about her pain pill addiction. Laura’s so sorry. Laura doesn’t want her to torture herself. She has news. She checked into Abigail’s treatment at Shady Hills and learned that they under-diagnosed Abby’s PTSD and were giving her anxiety medications that actually made it worse. Jenn cries. They hug.

Kayla walks with Marlena in the square, griping about Steve ditching therapy. Marlena thinks Kayla’s going to make it. She’ll find the answer and when she does, it’ll be the right one.

Kayla finds Steve at the park. He’s never giving up on them but doesn’t want to send mixed signals. His goal is to work on things. Kayla wants to see him stop running from himself. She’s done complaining and nagging. Steve vows to go into therapy with someone who isn’t a close friend. Kay will believe it when she sees it.

Jennifer brings Laura to Chad’s. Laura’s cold to Chad and outright nasty to Andre. She only wants to see her grandson so Chad tells her where he is. Once Laura’s gone, Jennifer shares Abby’s diagnosis with Chad, hoping it’ll be as comforting to him as it’s been for her. He shrugs. It doesn’t bring her back. He starts thinking and isn’t sure he can give his son away. Ever. Jenn asks Andre to give them privacy and once Andre leaves the room. Laura returns, exclaiming her grandson is a “piece of heaven.” Jenn asks for time alone and Laura kisses Jenn goodbye. Chad’s upset that Laura hates him. Adrienne and Lucas show up and Chad tells them his fears about giving them Thomas. Adrienne suggests they move in. Lucas thinks she’s nuts, but she says this isn’t about them. It’s about Thomas. They’re his family. Chad likes the idea, which relieves Jennifer. They hug, both smiling. Chad hopes her mom will like him a little now. They laugh.

News: Days of our Lives casting for right-hand man to mobster

Marlena arrives at Dixon Correctional Facility to see Clyde Weston. She was stunned to get his message and asks what he wants. If he can get a better psych evaluation, things would be better for him. Marlena says there’s no guarantee of that. He’s petulant and when she goes, Orpheus walks in. “Hey that looks like…” Clyde interjects, “The Devil?” They introduce themselves. Milo Harp says he used to be called Orpheus. It’s a shame he didn’t know Marlena was there sooner. He’d have liked to talk to the one person he hates more than anything. Clyde thinks they’ve something in common. Clyde smirks when Orpheus says if he wasn’t stuck behind bars, he’d kill everyone in Salem. Clyde calls it a pipe dream. Orpheus flashes to kidnapping Marlena and wants to discuss how they can make it a reality.

Nicole arrives at Deimos’. He lets her know about his offer to his brother. She’s surprised. They talk about investigating Titus Drew. Nicole remembers that name from her investigative reporting days. She offers to help and whispers something to him.

At TBD, Victor spots Brady. Victor wants Brady to take a leap of faith and believe in him. Brady can’t do it. When Theresa arrives, he fills her in.

Back at the hospital, Steve tells Kayla about an appointment with Dr. Carmine Strauss. He realized already that he has a pattern because of Duke. He’s excited and wants to press the reset button soon. Kay doesn’t know what that means and leaves him hanging.

On a call in the park, Andre says he may have found an ally. Nearby, Marlena tells John about her meeting with Clyde. John just wants to focus on her. They kiss.

Laura sits at Jenn’s, reading about Chad in the news.

JJ returns from his search for Abigail.

Days of our Lives pre-empted today...

Deimos and Victor team up and...