Days of our Lives recap for Thursday August 25, 2016: Chad learns something shocking that could win him his case, and Ciara walks in on an intimate moment. 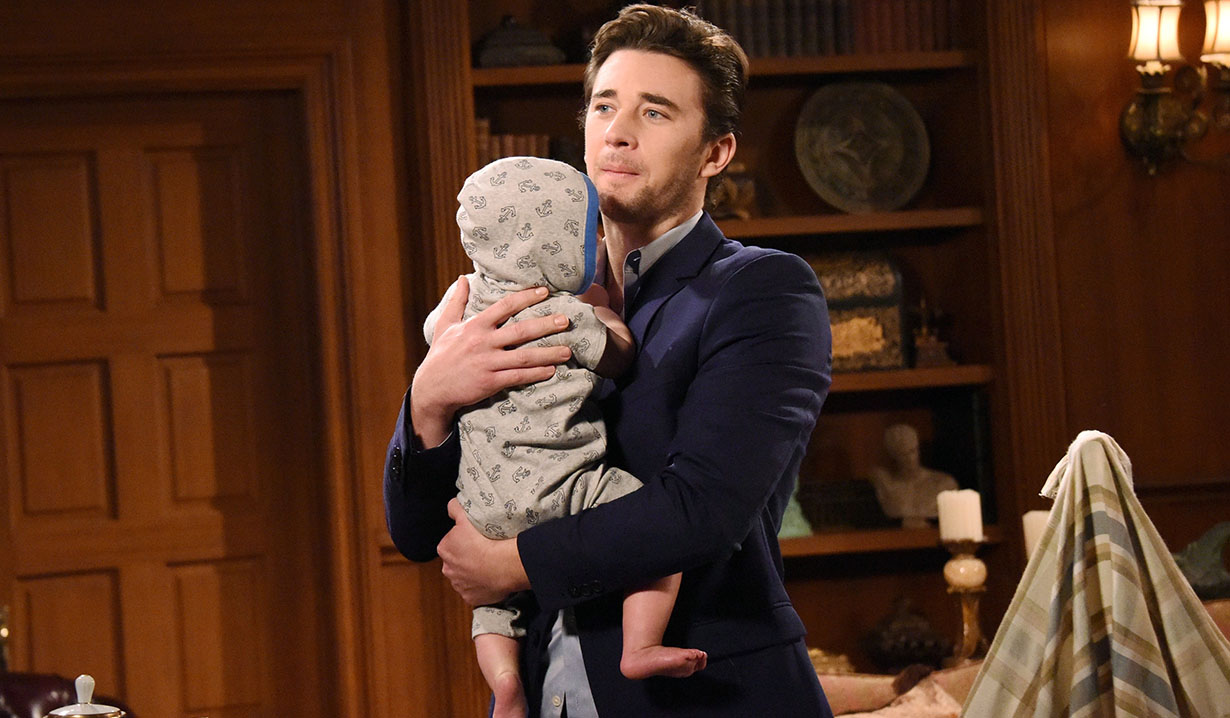 Kayla arrives at the Fleabag Motel where Jennifer’s passed out on the bed. When she comes to, she’s confused by Kayla and Belle’s appearance and after spotting the empty vodka bottle, breaks down crying. Kayla calls it a minor setback, one they’ll help her through. Jennifer asks if Belle’s going to tell Chad. Belle says she’s a mother too, and tears up, saying she could never exploit what Jenn’s going through.

At Marlena’s townhouse, Claire and Theo watch a movie together until Theo can’t stop talking about how much fun it was the first time when he saw it with Ciara. Theo’s sorry – he can see she’s upset but isn’t sure why. Claire explains that she wanted to make out. Does he want that or does he regret their first kiss? He doesn’t. She admits she has feelings for him and though he smiles, he’s not sure what to say.

At the DiMera mansion, it’s awkward after Ciara professes her love for Chad. Chad thinks she’s great and helpful but he can’t reciprocate her feelings. “I don’t love you.” He thinks he was too open with her and blames himself for what she’s feeling. Ciara doesn’t blame him, and wonders if it’s the age difference. Chad tells her it’s life experience. He has a kid, a company to run… he’s married. Ciara swears they’ve a connection. She tears up and urges him to be honest with her. Incredulous, he says he is being honest. The last thing he wanted to do was to hurt her. “Too late,” she says. Chad reminds her of his love for Abigail. He asks her to go – he has to let her go but will pay her through the end of the year. Ciara breaks down crying and runs off. After she’s gone, Chad tells his son he’ll never screw up again.

Breaking: Kassie DePaiva (Eve) is facing a fight with Leukemia

Jenn arrives home to Julie with Belle and Kayla. Jennifer asks for forgiveness, walking out that way. Julie says Doug’s out playing cards with a friend, and offers to make tea. Jennifer asks Belle to stay, worried if she leaves, she’ll go tell Chad. She stays and asks Jenn to feel free to look through her cell phone. She has no incriminating photos, nor has she called Chad. Jenn relaxes a little and agrees to go to a meeting with Julie. Chad turns up with Thomas and Belle steps outside to talk to him. She tells him Jenn’s not in a good place to care for Thomas. Chad assumes Jennifer has relapsed. Belle doesn’t respond but tells him to go home. Belle heads back inside and tells them about the exchange and how Chad suspects she fell off the wagon. Jenn tries to be strong. She’ll have to deal with the consequences.

Ciara arrives home and finds a note from Hope, who went to bed early. She texts Claire to talk.

Back at the townhouse, Claire avoids looking at her phone to see who is texting, preferring to finish her conversation with Theo. She regrets kissing him, realizing there’s nothing between them. He’s still into Ciara. Theo knows he has to get over her and says he’s not sorry they kissed. He kisses her again.

Back at home, when Ciara can’t get a hold of Claire, she looks through a list of guy’s phone numbers on her phone and decides not to call anyone. She takes off.

Ciara arrives at Claire’s – the door is partially open so she lets herself in and gets an eyeful of Theo and Claire making out on the sofa. It’s uncomfortable and Ciara winds up leaving. Theo heads home, too.

Julie’s supportive as she takes Jenn to the hospital for an AA meeting. In the meeting, Jenn tells her story about learning of her daughter’s presumed death and how it led her to a binge, even though she knew it wouldn’t fill the hole. “The pain was so unbearable,” but she knows she has to just feel it. Abigail would want her to deal with dignity and courage.

News: Learn which soaps are on Labor Day

Back at the mansion, Chad puts Thomas to bed. Belle shows up and admits Jennifer did relapse which assures him custody of Thomas unless he screws it up for himself. Chad says he already has, so Belle fakes a call to social services. He grabs the phone from her and she asks if he wants his kid in foster care. He doesn’t and since Ciara’s not available, Belle decides to stay the night.

Theo bumps into Ciara in the park. She asks if he and Claire are a couple now. He says no. “It just happened,” he explains. He offers to lend an ear if she ever wants to talk.

Deimos lets Nic know he’s going to do all he can to help Victor’s case.

The Tatenapping comes to a shocking...

Victor's booked for the Tatenapping...