The Tatenapping comes to a shocking end, with more questions than ever

Days of our Lives recap for Wednesday August 24, 2016: Tate is reunited with his parents, Justin makes a wicked accusation of Aiden, and Maggie gets good news regarding her surgery. 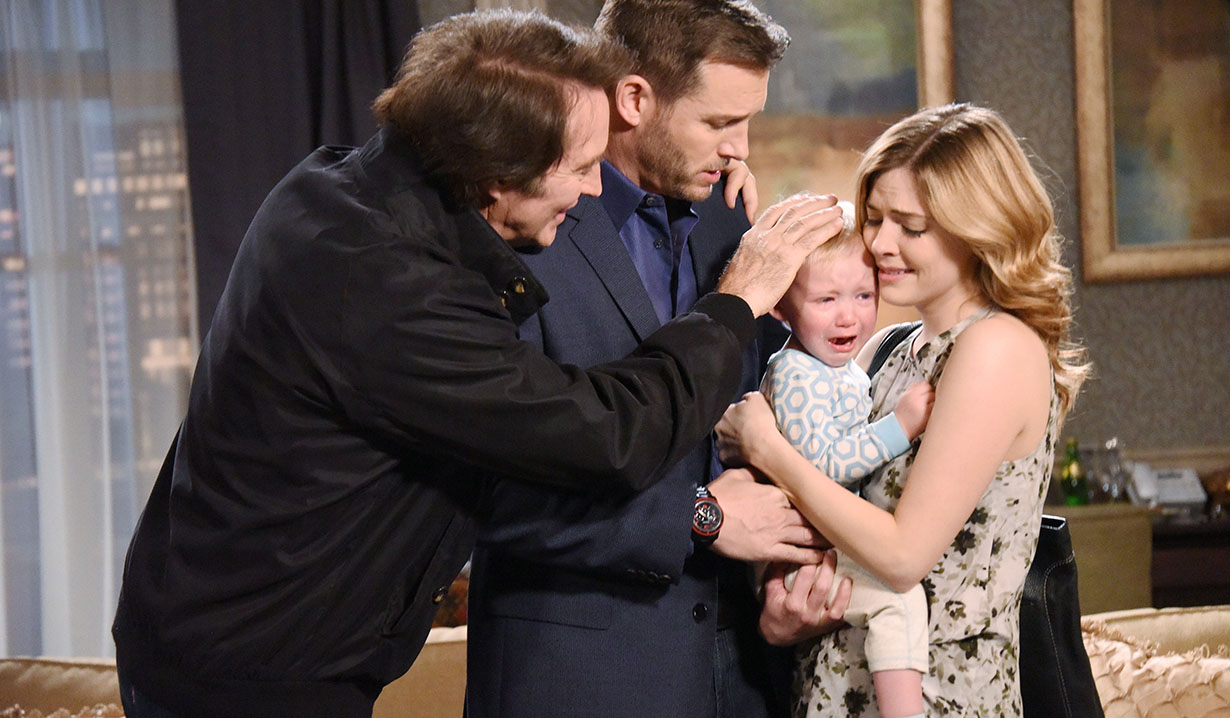 Rafe saunters into SPD and exclaims, “What the hell Abe?” Abe retorts,” Excuse me?” Rafe wants to know how a criminal, Aiden, wound up DA. Roman and Abe tell him this isn’t for him to question and reveal that Justin wasn’t an elected official and resigned for personal reasons. Rafe paces and has a meltdown and though Roman agrees with Rafe’s assessment of Aiden, Mayor Abe tells him to back off.

Justin bumps into Aiden in the square. He knows Aiden eavesdropped on his conversation with Roman and got to Dozer before he did and forced him out as DA only to take the job himself. Aiden thinks Justin’s one to talk since he stole evidence. Justin ignores that and asks why he’d want to be DA. “I wanted to give back to the community,” Aiden smirks. He realizes that when people have the right connections in Salem, they get away with murder.

Spotlight on: Bill & Susan Hayes, couples who met on the set and married in real life

Nicole and Deimos wait on news of Maggie’s surgery. In her room, Dr. Hochman tests Maggie’s feet and legs and she can feel his touch! She tears up and thanks the doctor in joy. Sonny and Caroline join them and hear the glorious news. They’ll start physiotherapy soon. Deimos and Nicole walk in and upon hearing the news, Nicole’s thrilled. Maggie hands her Daniel’s hospital badge back. Victor tells Deimos that they’re all grateful to him. They thank Hochman who Victor says he owes his life to and the doctor goes. Maggie says in spite of Deimos causing her paralysis, she’s grateful to him. Caroline’s mouth drops open and Victor clarifies that Deimos persuaded the doctor to do the surgery. Sonny wonders how. Deimos was on a mission. Victor agrees to wipe the slate clean. Everyone files out.

Theresa, John and Brady are unable to get a response from knocking on a door at some motel outside of Salem. Brady goes to the concierge to bribe them to get a passkey and once he returns, they enter the room. Tate’s there, behind a room divider. Theresa and Brady happily reunite with the little guy. The cops turn up to wipe for prints and they find a cell phone with a saved number which they feel will lead to the kidnapper. Brady dials the number…

Back at the hospital, Victor takes Brady’s call… Later, Maggie opens a present from Victor – red dancing shoes. She cries that they can mambo together again. Everyone returns and Victor talks about setting a gym up in the townhouse for his wife. Brady, John and a cop arrive to arrest Victor for conspiring to kidnap Tate. Maggie screams. John tells them they’ve proof. Brady’s thankful that Maggie’s going to walk and is sorry to bust in on the happy moment but they found Tate. Everyone’s happy to hear. Victor insists he’s not the culprit. Brady asks why his number was saved in the cell phone they found. Victor has no idea. He’s being set up. The cops drag him off and Sonny blames Deimos who denies screwing his brother over. Everyone goes except for Caroline, who is forced to admit her vision of Victor being a part of the Tatenapping.

Aiden returns to SPD and Rafe goes to him with a warning. Later, Victor’s led in and swears on his life to John that he’s got the wrong person.

Sonny finds Justin in the square and tells him about Maggie’s recovery and Victor’s arrest. They go to the pub and Justin tells him he can’t help Victor. He’s no longer the DA after resigning last night. “I did something really stupid to help Uncle Vic and it blew up in my face,” he admits, telling Sonny all about Deimos’ test. Sonny maintains that Deimos is behind the Tatenapping.

Back at the Kiriakis mansion, Deimos calls someone as Nicole walks in. “My brother just got arrested for kidnapping. I want to know the charges and evidence – be discrete.” He disconnects and Nicole asks if he’s responsible for setting Victor up.

Brady returns to Theresa at the townhouse and they discuss Victor being the kidnapper. They kiss.

Jennifer is mortified to see she’s not alone in her hotel room.

Jennifer turns to vodka and pills...