Days of our Lives recap for Tuesday August 23, 2016: Salemites deal with Abigail's presumed death in their own ways, while a vision of Jack appears to Jennifer. 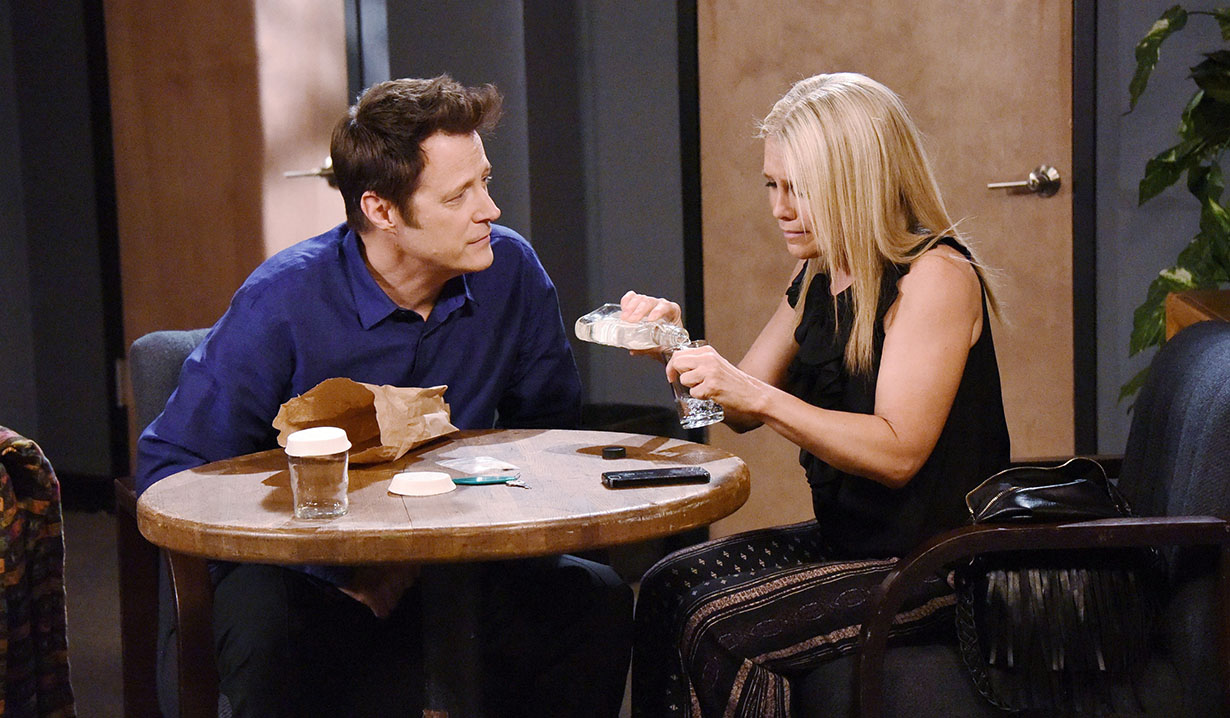 Claire sits at the townhouse, working on her song for Chloe.

Theo finds Ciara in the square and tells her about Abigail’s so-called death. She takes it all in and cries. They talk about how sweet and caring Abigail was and Ciara feels for Thomas, missing Bo. Theo admits he doesn’t remember his mom as much, though he talks to her in his head all the time. Ciara takes off to see Chad while Claire stops by, crying after hearing the news.

Belle finds Chad looking like death warmed over at the DiMera mansion. She asks if he got much sleep. He didn’t – he spent the night telling his son his mama’s not coming home. He tries to make sense of it all and pinpoint when things went to hell. Belle tries to get him to stop beating himself up but all he can do is blame himself for failing Abigail. He thinks it might be in Thomas’ best interest if he lived with Jennifer. Belle tries talking him out of the self-pity. He fires her as his lawyer. Ciara waltzes in and lets Belle know she’ll take care of Chad and Thomas. Belle offers to stay since she cleared her schedule for the day. Ciara cleared hers too, and assumes Belle doesn’t think she’s mature enough to handle this. Belle furrows her brow. She didn’t think that. “You don’t have to get defensive,” Belle says. Ciara argues and Chad tells them to shut it. He tells Belle to go, Ciara to stay. Once Belle’s gone, Ciara’s tasked with comforting Chad and when he asks why she cares so much she blurts, “Because I love you!”

Jennifer looks relieved as she lets herself into the Fleabag Motel and digs in her purse for a brown paper bag with a bottle of vodka and a baggie of pills. A vision of Jack appears and begs her not to get wasted. Jenn cries that their baby girl is gone. Jack asks if she thinks that’s the answer. Jenn takes a good look at Jack. She misses him so. He knows and that’s why he’s there – to remind her she has so much to live for. Abigail would want her to be the strong one. She nods. “For JJ.” Jack says, “For Thomas.” Jack thinks he needs protecting against the evil Chad DiMera. Jennifer starts yelling that she wants to get the mind-numbing started. When Chad calls, Jennifer doesn’t pick up. Jack urges her to call him back and let him know she’s going to raise their grandson. Jenn stares at Thomas’ photo and pushes the pills away. Jack disappears and Jenn takes the pills and chases them with a little vodka, then sobs into her drink.

Belle finds Ciara and Theo in the square, discussing Abigail. They commiserate and Theo goes off while Belle tells Claire that she and Shawn decided to let her defer college for a year. After, if nothing major happens in her career, she needs to get her butt back to school. Claire yelps in delight and Belle hugs her until she can’t breathe. They laugh and Claire goes to find Theo to give him the good news. Paul calls Belle to tell her he has something she can use in her court case. Jennifer Horton fell off the wagon.

Moments later, Belle finds Paul at the Brady’s pub, where he fills her in on watching Jennifer purchase the vodka and check herself into a motel. Belle’s sad, which surprises Paul. Belle doesn’t feel like gloating and when Paul asks if she’ll use it in court, she walks away.

Back at the townhouse, Claire talks to Theo about her mom allowing her to focus on her career for the year. He’s happy for her and asks her to sing the song she’s been writing. She does so. After, she talks about him letting Ciara go and he responds to a passionate kiss she plants on him.

Belle lets herself into the Fleabag Motel and watches Jennifer sleep.

Maggie's surgery results are in &...

The Tatenapping comes to a shocking...

The 100 Recap: Is This the Beginning of the End for Clarke's People?