Days of our Lives recap for Monday August 22, 2016: Belle and Shawn worry for their child's future, Claire learns Chloe's pregnant, and Maggie has the surgery on her back. 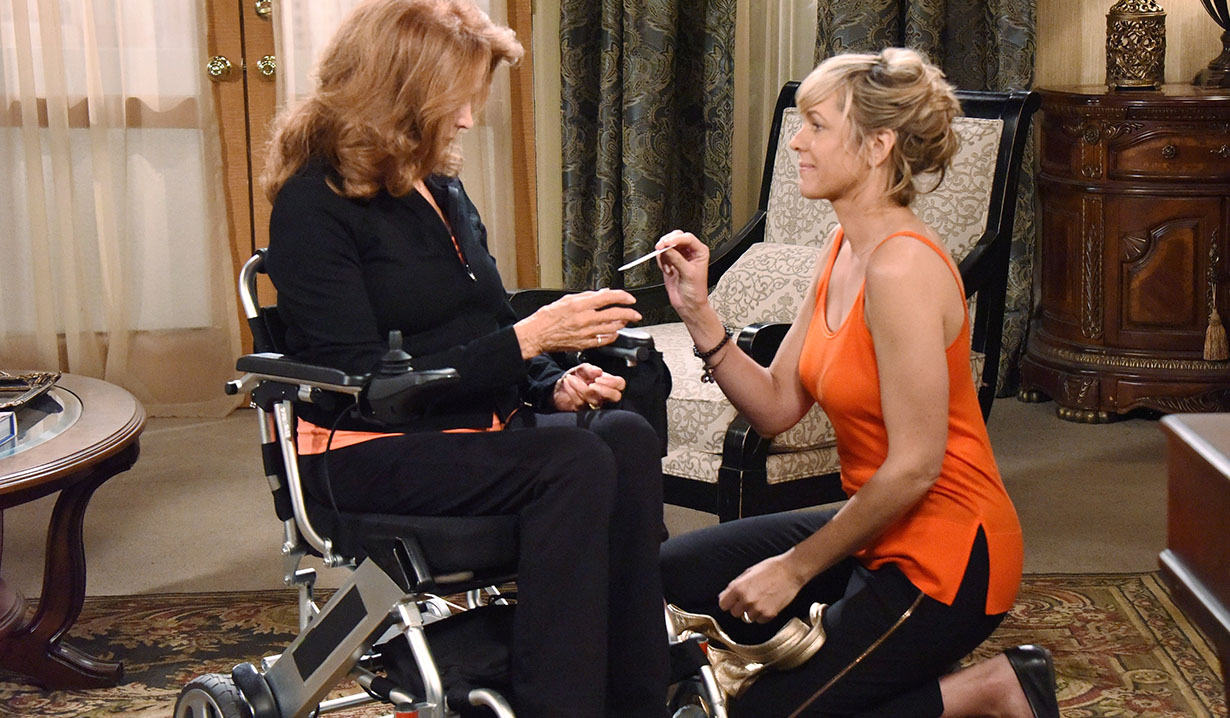 At home, Victor promises Maggie that after her operation, they’ll dance. Nicole arrives. She heard Maggie was having surgery today and brought her Daniel’s University Hospital identification for luck. When she learns Deimos is paying for the whole thing, she defends him, leaving Victor hoping she’s not falling under his brother’s spell.

At TBD, Shawn and Belle discuss deferring Claire’s studies for a year. Belle doesn’t feel Claire will learn anything from Chloe but Shawn wonders if the job will backfire and she’ll be back in school in no time. Chloe tosses and turns in bed at home, dreaming that Deimos has learned he’s the father of the “shameless slut’s” unborn baby. She wakes up gasping. Claire pops in with bagels, causing Chloe to run for the bathroom to hurl. Claire sees an abortion pamphlet and furrows her brow. Chloe returns and can see what Claire has discovered. She clarifies that yes, she’s pregnant but she’s not aborting. She’s not sure though if she’ll keep working. Claire thinks if other big stars can handle it, so can Chloe!

Retrospective: Sami blackmailed Lexi to get Austin away from Carrie

Philip drifts off, thinking of Chloe’s unplanned pregnancy at Mandalay. She calls with news – she’s going to have the baby and keep on working. Philip’s happy to hear it. She’s surprised Claire is the one who changed her mind. They agree to keep the truth from Deimos. As Chloe gets ready, Claire writes a song for her. She sings aloud and gets accolades from Chloe.

Nicole drops by the Kiriakis mansion and hears Deimos playing piano. She tells him she’s willing to return to Basic Black. He’s glad and asks if she’s considered his offer to move in. She needs to slow things down. Deimos doesn’t want to wait. He wants to have kids with her. Nicole says there are some things he needs to know about her, like she can’t have kids due to a shooting several years ago. Deimos exclaims in shock. Nicole tells him she can become pregnant but not carry to term. Deimos apologizes for bringing it up. Nicole says she’s finally accepted it. Deimos says they can adopt or hire a surrogate. He sees he’s once again getting ahead of himself and backtracks. He’s just glad she’s returning to Basic Black. He asks what changed her mind and learns it was his grand gesture to Maggie. Nicole invites him to go to the hospital to wait for Maggie to wake up after surgery. He’s hesitant so she convinces him it’s a good idea. Victor watches as Maggie’s led into the OR at University Hospital. Victor thanks Dr. Hochman for changing his mind about performing the surgery. The doctor goes to the OR. Sonny arrives to lend Victor support and Hochman returns to tell them surgery is over, Maggie’s in recovery and she’s doing well. Nicole and Deimos arrive. Victor and Sonny sit with Maggie as she wakes up. Victor shares the good news that she should regain full functionality. Deimos and Nicole appear…

Back at TBD, when Philip’s name comes up, Belle tells Shawn she’s done with him. They make out and he toddles off to work. Philip appears. He appreciates her help getting the record label off the ground but now thinks it’s a mistake. He doesn’t like punishing Claire because Belle’s driving him nuts. Belle vows to bite her tongue but it’s not enough. Philip’s finding someone to buy her out. Belle’s mouth drops open. Stung, she lashes out and walks out on him.

Philip arrives at Chloe’s with tea, remembering it was the only thing that helped her last time she was pregnant. Chloe asks Claire to work on that new song some more and to return later. Once she’s gone, Philip wants to know what they’re going to tell people about her baby. It needs a father. “Finding pretend baby daddy volunteers isn’t exactly going to be easy,” Chloe says. Philip offers himself and Chloe grins.

Shawn smiles while eavesdropping in the park as Claire sings her new song on the bench nearby.

Jennifer gets a visitor from beyond...

Jennifer turns to vodka and pills...