Days of our Lives recap for Friday August 5, 2016: Chad thinks Abigail is dead, Lucas has a suggestion for Jennifer regarding the custody case, and Aiden eavesdrops on an important meeting between Justin and Roman. 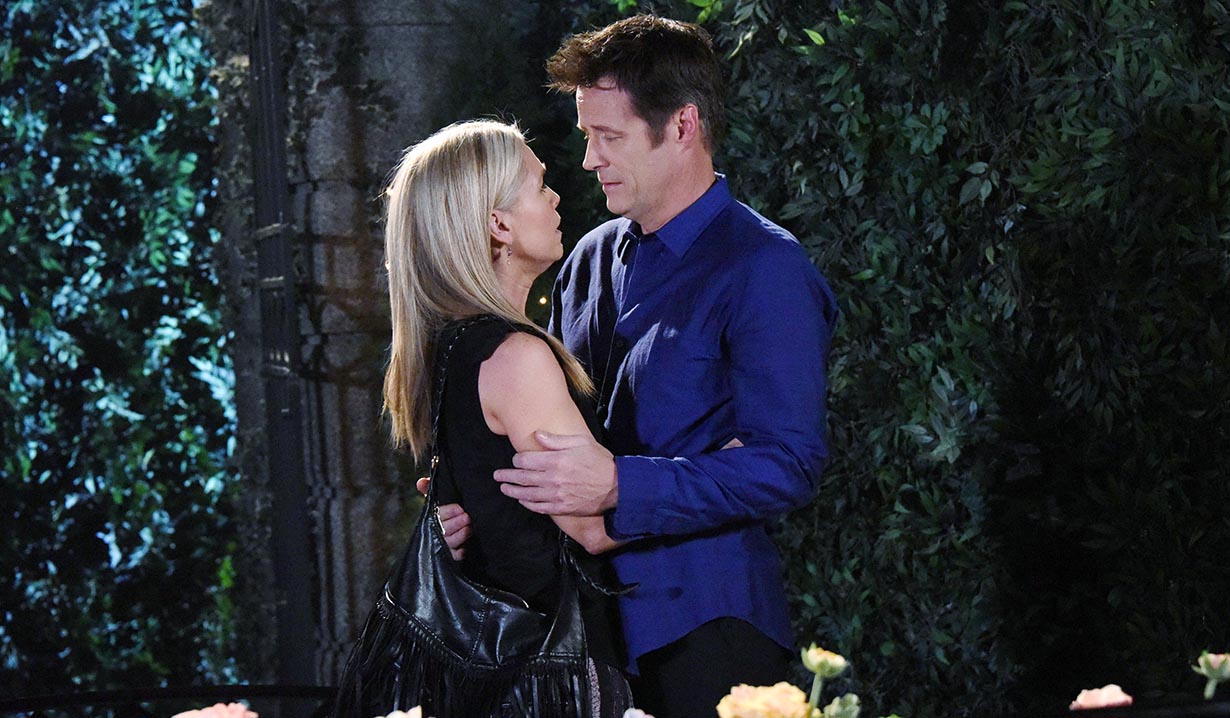 A smiling Rafe drops by Hope’s. She’s feeling better and sent Ciara to Chicago. He’s glad. He’s got some Jason Bourne DVDs and says, “It looks like it’s gonna be a night of flicks and chill.” Hope laughs at him, because he doesn’t know that the expression is “Netflix and chill.” She fills him in and whispers what it means. He grins, embarrassed. They snack on peanut brittle and banter, then pop in the first movie. There’s a power outage moments later so they light some candles and dance. They head upstairs and make love.

Outside TBD, Aiden calls Andre to tell him Roman and Justin are taking a meeting inside. He heads in to eavesdrop and hears Roman talking about the missing evidence in that old case. A fired cop came forward and knows who got rid of it. Justin offers to talk to him – alone. Aiden takes off.

At Mandalay, JJ, Jenn, Adrienne and Lucas discuss the lack of leads in Abigail’s disappearance. Jennifer asks when their wedding is. They admit they’ve put it off but agree to start planning when JJ and Jennifer encourage them not to wait for Abby’s return. Jennifer reveals her plan to seek custody of Thomas, shocking Adrienne and Lucas. Lucas wonders if she can figure something outside of court. Jenn explains she tried.

On a call from home, Chad tells someone to sell off all holdings from the company. Harold enters with an envelope. Inside, Chad finds Andre’s faked license with the name Jenn Thomas and a photo of Abigail. He calls somebody who confirms she perished when the flight crashed. Jennifer rushes in just as he smashes a glass against the wall. She judges him without knowing the full story and when he tells her everything, she clutches at her stomach and sobs, “God, no!” JJ lets himself in and upon hearing that Abby’s dead, accuses Chad of faking it and runs off to call the airline. Jennifer starts crying again, feeling bereft. Devastated, Chad holds her. JJ returns and tells them it’s true. Abigail was on that flight. He yells at Chad, blaming him for destroying his sister’s life. Everyone takes off and Chad snuggles with Thomas. Belle turns up. He lets her know Abby’s presumed dead and she comforts him.

Aiden meets Officer Frank Dozer, (Henderson Wade) at Mandalay. Dozer calls him the shyster lawyer who came back from the dead. Aiden ignores that and lies that he’s working with Roman on the case with the mysterious evidence disappearance. They go off to the park where Dozer spills. Once he’s gone, Andre appears and Aiden informs him of what the cop said.

Aiden meets Abe at the pub. SPD is about to have a major scandal on its hands. Depending on how their meeting goes, Aiden can make it better or worse.

Justin meets Roman and Abe at SPD. Justin tells them Dozer never showed. Abe takes him into the interrogation room.

Jennifer walks through the park, sobbing. Jack’s ghost appears to her, comforting her. They hug and Jenn says she thought it was horrible losing him. This is worse. He knows but she’s tough and will get through this. Jenn says he gave his life to save Abigail’s. She wants him to “find her and keep her with you and Grandma and Grandpa.” He promises. Jenn wants drugs to ease the pain. Jack says that won’t help and he’s not going to stand around and “watch the bravest girl I know self-destruct.” Jenn tells him to go and so he does. Poof.

Justin finds Adrienne and Lucas at the square. He’s not smiling so Adrienne asks what happened…

Back at his room at the Inn, Andre learns that Chad has gotten wind of the fake news that Abby is dead. He laughs and then Aiden arrives with a grin.

Back at Hope’s, she and Rafe head downstairs to find Roman pounding on the door. He tells them Justin has been replaced as DA by Aiden Jennings. Hope falls to the floor in shock and Rafe almost has heart failure.

“Days of our Lives” will not be seen again until August 22, due to the Summer Olympics.

Maggie's surgery results are in &...