Days of our Lives recap for Thursday August 4, 2016: Deimos and Nicole take their relationship to a new level, Dario gives Chloe a pep talk, and Belle makes a suggestion to Chad about his case that takes him back. 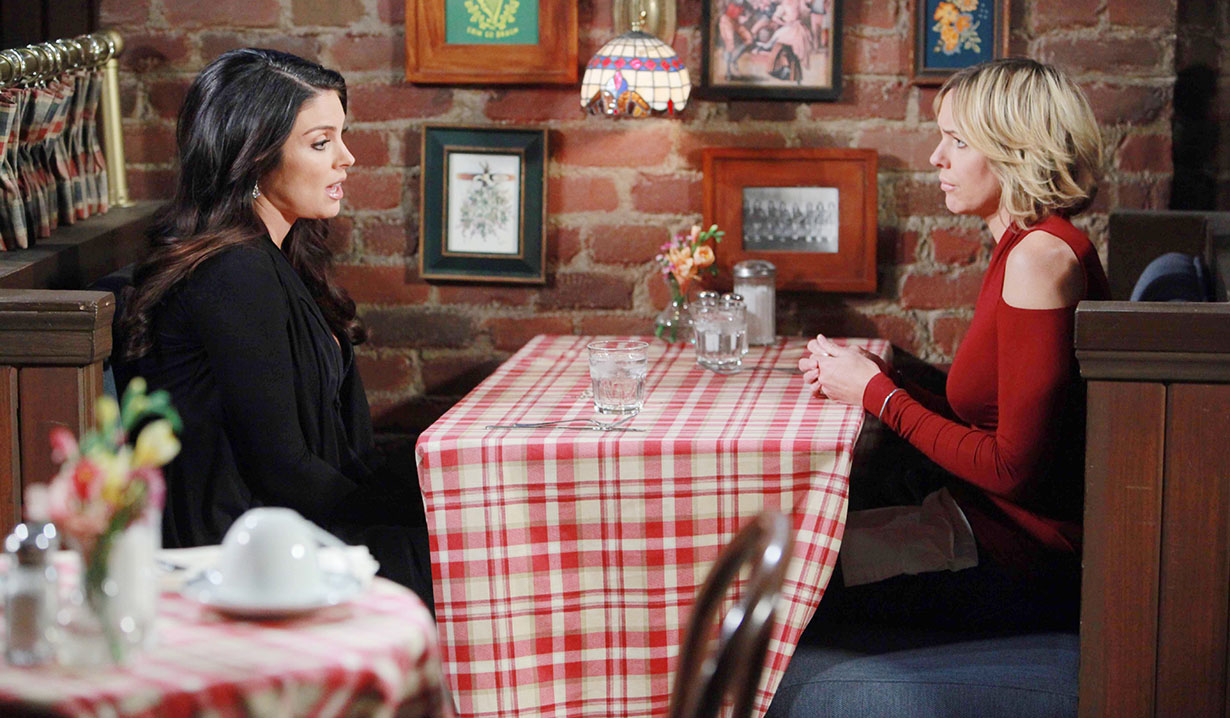 Chloe wakes up home, in her bed, flashing to dreaming that Deimos knows she’s pregnant with his kid.

At the Kiriakis mansion, Deimos grins when Nicole admits she can’t get him out of her head. She says she and Deimos are nothing alike. Daniel changed her. Deimos wants her help in changing his behavior but she suggests he get a therapist for that. They argue over whether or not he loves Nicole only because she looks like Helena. He caresses her arm and offers to open up any door to a new career, since hers is in limbo. He vows to never lie to her or let anyone hurt her. He can make her happy if she gives him a chance. He asks her to marry him. They kiss passionately and he starts taking off his clothes. They take it to the sofa. Later, a nearly nude Nicole joins Deimos as he plays Beethoven’s Für Elise on the piano where they cuddle, before Nicole goes home. Once alone, Deimos looks at Helena’s picture, thoughtfully, and puts it back in the box.

At the mansion, Chad dreams that Abigail has shown up, ranting at him, and then she morphs into Jennifer, who blames him for driving Abby over the edge. Chad tells her to shut the hell up and to get out. She won’t let him ruin another member of her family and tells him she’s got Thomas. He wakes up with a start. Belle lets herself in. They discuss his case, building Chad up and tearing Jennifer down, starting with her addiction. Chad’s not on board with ruining Jennifer’s life, knowing Abby wouldn’t want that. Belle sighs and decides to make the case on how fatherhood trumps a woman with known issues. Chad can tell she’s got something on her mind and asks if she wants to talk about it. She doesn’t want to discuss it. She tells him to get his ass in gear by fixing issues with his businesses, dressing conservatively, staying out of trouble, “And 86 the drinking.” She goes and Chad asks Stefano’s picture for advice and then considers doing whatever it takes to ensure Jenn doesn’t get custody of his son.

Spotlight on: Alison Sweeney, Michael Park, Susan Lucci, where are they now?

Jennifer talks to Maggie from Thomas’ nursery at her place, the one she tells Maggie that Abby set up. They discuss the lack of news in the Tatenapping and when they disconnect, Jennifer gets a back spasm and almost hurls. She finds an old stash of pills in a chest of drawers and gazes longingly at it before tossing it in the bin and leaving the room with the trash bag. She returns later, thinking she’ll be bringing Thomas home.

From the square, Chloe watches a woman with her child and flashes to Deimos kissing her tenderly. Upset, she runs off.

Chloe arrives at TBD and greets Dario. They catch up and she orders Cabernet, then quickly changes her order to ginger-ale. She whines to the barkeep that everything she does seems to crash and burn. Dario lifts her spirits, knowing she has a lot of talent to share. A grim-looking Nicole shows up and Chloe follows her to a table, as Dario lurks nearby, watching them while on a call. Nicole tells Chloe about Deimos’ proposal and that she thinks she should run far, far away from him, but she can’t. Chloe gets it. She felt that way about him, too. She suggests her friend be careful. “He could be playing you.” Nic knows.

JJ has it out with Chad.

Romance is in the air for Rafe and Hope.

After Gabi's attacked in the park,...

Jennifer gets a visitor from beyond...